After an early-season crash, Jose Gonzalez likely wouldn’t have been considered a candidate to have one of the most dominating seasons in E3 Spark Plugs NHRA Pro Mod Drag Racing Series presented by J&A Service history.
27 Dec 2021
Josh Hachat
2021 world champion profile

After an early-season crash, Jose Gonzalez likely wouldn’t have been considered a candidate to have one of the most dominating seasons in E3 Spark Plugs NHRA Pro Mod Drag Racing Series presented by J&A Service history, especially when a new car was months away from being finished.

Gonzalez figured his year might be finished, but in remarkable fashion, his old car was sent back from Kuwait on a plane. His team converted it from a turbo car to a ProCharger-powered Q80 Camaro in record fashion, and he didn’t miss a race.

In fact, Gonzalez was better than ever, winning three straight races and four of five to take a commanding points lead he never relinquished. The veteran was so dominant, in fact, he clinched his first NHRA world championship at the race before the finale. It was a surreal experience, and it all traced back to his team, sponsors, and Sheik Duaij in Kuwait going the extra mile to make sure Gonzalez wouldn’t miss a race.

“Those guys never, never gave up,” Gonzalez said. “The work they did and then to win the first race back, it was amazing. They put in so much effort, we decided to go for [a world championship].”

That was a big step for Gonzalez, who had proven to be one of the top drivers in the class but could never race a full season due to business commitments in the Dominican Republic. He also took off racing in 2020 due to the COVID-19 pandemic.

But after coming back after the crash, qualifying No. 1 in Norwalk, and then putting on a dominating show in eliminations, Gonzalez felt it might be a magical year. 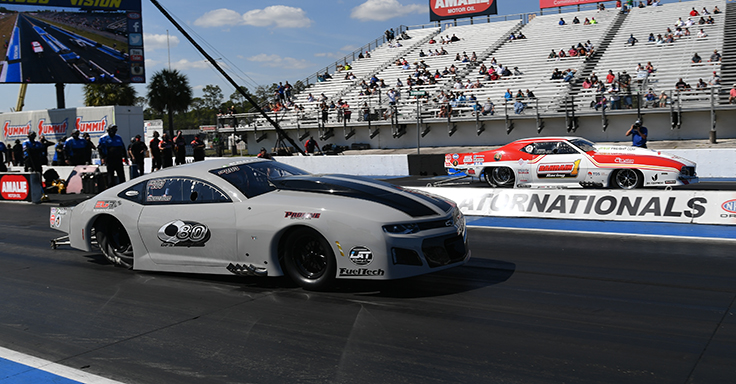 Of course, his success started right off the bat in 2021 as he blasted to the record books with a run of 5.621 seconds in Gainesville and then won that race by going 5.720 in the final round against Justin Bond. He fell in the second round in Atlanta and then had the tough-luck crash in Charlotte when an oil line came loose and got fluids under his rear tires.

It put a screeching halt to his momentum, but the best was yet to come as his team put in immense work over the summer. After winning in Norwalk, Gonzalez won in Denver and Brainerd, which appeared on the NHRA Pro Mod schedule for the first time in class history.

But Gonzalez looked tremendous at each race, qualifying No. 2 at both races and rolling to the win, crediting a team led by tuner Steve Petty and Eric Dillard at Pro Line Racing.

“This class is so competitive, and the racers are so good, it takes a lot of preparation, and 50% of the race is won before you go to the track,” Gonzalez said. “All these racers make me better, and you have to be good on the starting line or you may as well stay home. If you’re not .025 or better, you better pack your bags and go home.”

Gonzalez, who has long been regarded as one of the top drivers in the class and has enjoyed impressive success in a number of different series and Pro Mod platforms over the past decade, showed his skills in that regard, going .011 in the final round at the fall Charlotte race. He earned a bit of redemption at zMAX Dragway in going 5.792 at 248.92 to defeat Mike Castellana in the final round, which put a stronghold on his championship hopes. 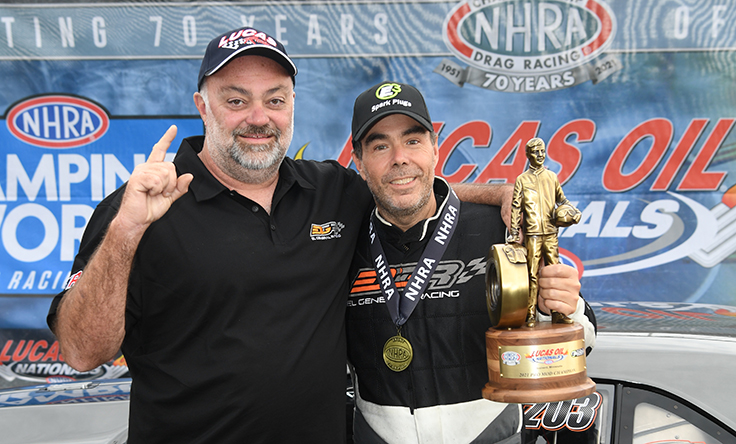 That wasn’t his best final round light, either, as Gonzalez delivered a .003 in the championship round against Brandon Snider a month earlier in Brainerd.

After his Charlotte triumph, Gonzalez finished the job in Bristol, qualifying second and advancing to the final round to clinch the championship before the class even got to the finale in Las Vegas. It was a dominant stamp on an incredible season, one that saw Gonzalez go 24-5 in eliminations, and he couldn’t put enough praise on the likes of Petty and Dillard.

“They have always been really honest with me and treated me like family,” Gonzalez said. “They’ll always be family to me, and they’ve been a special part of my life. We know each other so well, and we just click. I know what he likes in the car, and I try to do everything the same. There’s such a good understanding between us, and I just enjoy it so much. My job is the easy part, and they’re just so good at what they do. They’ve always found a solution to keep us competitive.”

It took a lot of cooperation and worthwhile partners to have Gonzalez racing full time in 2021, but the payoff made it all worth it for the veteran driver. It was considerably different from any year he’s ever raced, but the support from everyone ensured it was a season Gonzalez won’t forget.

“After the accident, they never gave up and stood right next to me and had my back. I am glad I could deliver this to Sheik Duaij and all of Kuwait,” Gonzalez said. “I think what makes this so nice is doing it with friends and family. We had many people fighting for this time in the Dominican Republic, and we were all welcomed by so many great fans here in the United States. It’s been a tremendous year and a dream come true.”