Fans didn’t need another reason to attend the upcoming NGK/NTK NHRA Four-Wide Nationals at zMax Dragway but they got one with the addition of a special jet Funny Car match race to close out the show on Friday evening. During the event, Paul Sieli in his Mustang Sally Mustang will take on April Crownhart’s Diamond Jim Firebird in a special exhibition that will feature all the smoke, flames, and thunder that jet cars are known for. 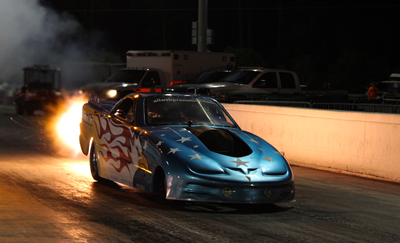 April Crownhart is a second-generation racer who took over driving from her father, “Diamond Jim” Crownhart, who previously raced in the Top Alcohol classes before building his first jet car. The Diamond Jim Firebird is powered by a Vietnam-era Pratt & Whitney J/60 fighter jet engine. April Crownhart knows a thing or two about the military. She previously served as a welder in the Army and deployed for Operation Iraqi Freedom. In 2005 she joined a Local Millwright union starting a new career path. As a woman in construction, she excels in her roles as a wife, mom, and now a representative for the millwright union trade.

Paul Sieli is the owner and driver of the Mustang Sally jet Funny Car sponsored by Excel Turbines. Father of three and grandfather of four, he’s a retired businessman, a pilot, and a military veteran who served in the U.S. Army 82nd Airborne. Sieli is also a skydiver with more than 1,000 jumps to his credit. In drag racing, he previously drove in Super Comp and Top Dragster before earning his NHRA exhibition license in the jet dragster and jet funny car categories.