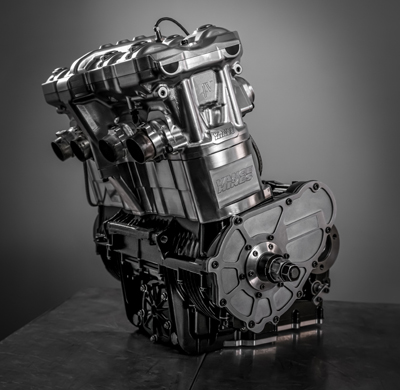 The Pro Stock Motorcycle class has long been one of NHRA’s most competitive and most diverse eliminators, and it figures to become even more competitive with the arrival of a new four-valve Suzuki engine package offered by Vance & Hines, the most successful team in the history of the class. The four-valve engine combination was approved for competition last season and made its official debut in Indianapolis thanks to Suzuki racer Chris Bostick, who raced a version of the new head produced by Monster Race Products.

The long-expected Vance & Hines version of the Suzuki four-valve engine was designed exclusively for GS-based drag racers, and it is scheduled to make its official competition debut at the Amalie Motor Oil NHRA Gatornationals, March 12-14. The racers expected to use the new engine include world champion Jerry Savoie, as well as Cory Reed and Joey Gladstone, who will be racing a pair of new Suzuki entries built and maintained by the Vance & Hines team.

“The scale of this launch is unprecedented in the drag racing world, and it highlights our company’s technical capabilities,” said Mike Kennedy, president of Vance & Hines. “This engine and the cylinder head design are applicable to several racing classes and easily adaptable to every team that is currently running a two-valve Suzuki GS. This launch is a proud moment for Vance & Hines and hopefully will net many victories for our Suzuki riders in 2021 and beyond.”

The new four-valve head modernizes the technology in Suzuki drag racing motors. It replaces the two-valve design which was introduced in 1998 and retains the 1,850 cubic centimeters engine displacement. For the first time, Vance & Hines has integrated finger-follower technology rather than a shim-under-bucket design in a drag racing cylinder head, which allows for less mass in the valve train and increased rpm.

The intake and exhaust port spigots are modular, so they can be adapted to different air boxes and exhaust pipes without redesigning or remanufacturing the head itself. This allows the new head to be used not only in NHRA's Pro Stock Motorcycle class but also in the Pro Mod and Pro Street classes. Competitors making the switch from the two-valve to four-valve combination will have to make only minor airbox modifications since the new head is actually smaller than its predecessor. 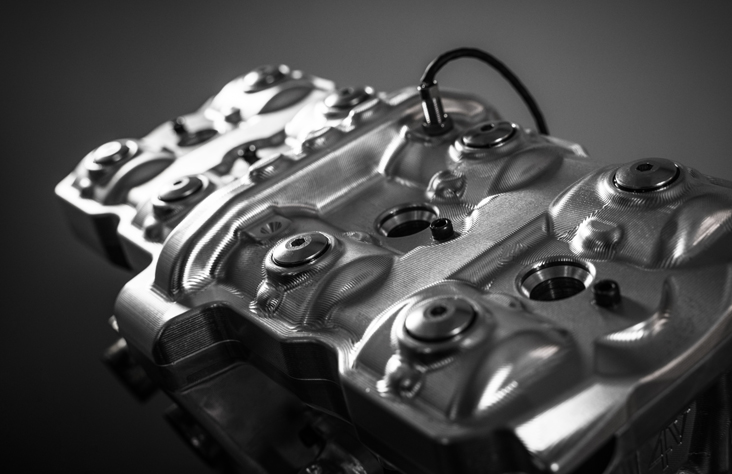 Design credit for the motor, code-named “VHIL18504V,” goes to six-time NHRA champion Andrew Hines. The head was completely developed in Solid Works CAD design and was a fully functional running model prior to production.

“The 1850cc motor is approaching nearly 400 hp, and we believe that this is just the start of a new era of Suzuki drag racing championships," said Hines. "Right now, this four-valve design is more powerful than the best of our two-valve motors. And there's room to get better and faster with this architecture.

“In October of 2019, we started working on this project and followed NHRA’s guidelines to get it approved,” Hines said. “Before that, we’d kicked around a few ideas as far as overall design and some of the things we wanted to try, including the finger-style followers. We wanted a product that would not have many limitations going forward. By January of 2020, we had a CNC cut model submitted for approval.” 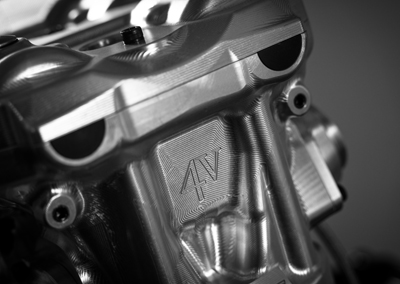 Hines acknowledged that the COVID-19 pandemic slowed the development of the four-valve project, particularly when it came to obtaining parts and components from outside suppliers. The first running engine was ready for dyno testing last November. The Vance & Hines team also recently announced the end of their long factory-backed Harley-Davidson effort, a move that allowed more time to devote to the four-valve project.

“Right now, our Suzuki customers are perhaps our biggest priority,” said Hines. “We have a lot going on at our shop, some of which will be announced shortly, but we have a lot of customer orders to fill with four-valve stuff, and that’s our priority.”

Hines wouldn’t speculate when it comes to the anticipated performance of the Suzuki four-valve, but he did acknowledge that the two-valve platform that has been the standard for decades is likely on borrowed time.

“This should be a game-changer,” Hines said. “There are many limitations to the two-valve engines. They were almost maxed out when they were 1,500ccs and my brother [Matt] was running 7.30s. Now, they’re 1,850ccs, and we’re going 6.70s. Once we get them sorted out, I don’t see any need to go back to the two-valve stuff. Now, it will be interesting to see how this new engine stacks up against the V-Twin bikes. Right now, Matt Smith is the quickest, and it’s going to take some effort to catch him, but I certainly think this will close the gap. I also think there will be more diversity in the class. Lately, it’s been dominated by V-Twins. I think you’ll be much more of a balance now, and I think it’s piqued the interest of a few former racers, and racers from outside the [Pro Stock Motorcycle] category.”