Scotty Pollacheck got his long-overdue first Pro Stock Motorcycle victory last season and will now return for a shot at the championship with the backing of Denso and Strutmasters.com
02 Feb 2021
Kevin McKenna, NHRA National Dragster Senior Editor
News

It took a decade for Scotty Pollacheck to earn his first NHRA Pro Stock Motorcycle victory, but he’s convinced that the wait for a second title won’t be nearly as long. Pollacheck, the winner of the Denso Spark Plugs NHRA U.S. Nationals, has announced a return to Matt Smith Racing for 2021 with the backing of Denso, which joins existing partner, Strutmasters.com. Denso is also the primary supporter of Pollacheck’s teammates, Matt and Angie Smith. In addition to his long-awaited U.S. Nationals victory, Pollacheck also joined the Denso 200-mph Club last season and was a runner-up in the Mickey Thompson Pro Bike Battle. He finished the year as the No. 3 ranked rider in the NHRA Camping World Drag Racing Series Pro Stock Motorcycle standings.

“I’m very happy to see how things have fallen into place this winter, especially with the addition of Denso as a primary sponsor,” said Pollacheck. “It's very cool to see all three of our Matt Smith Racing bikes with the Denso logo on them. I’m also very happy that Chip [Lofton] and Strutmasters have elected to renew with us for a third straight year. It’s great to have him in my corner. There are so many members of the Strutmasters team, and I’ve gotten to know a lot of them, and we support each other. I also sell Strutmasters products in my business, Quality Tire, so there is a natural tie-in for them.” 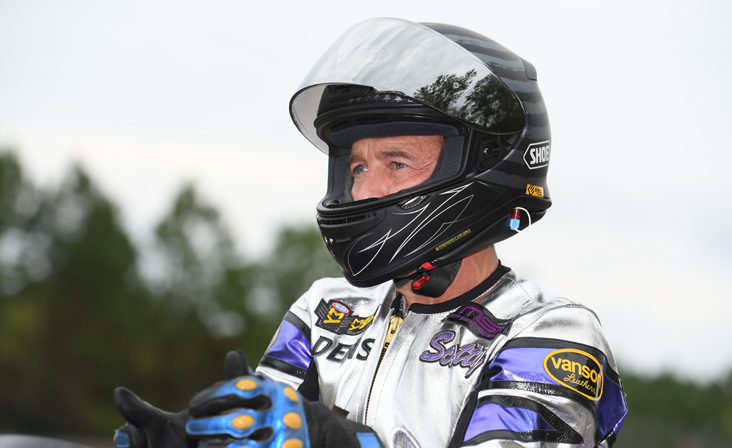 “Someone once asked me, ‘How is it that you were chosen to be so successful?' I answered, 'It was my turn.' And so it is with Scotty Pollacheck; it was his turn,” said Lofton, who is also the primary backer of 2020 Top Fuel rookie of the year Justin Ashley and several other prominent NHRA racers. “Scotty paid his dues for years competing at a high level, and now he’s a force to be reckoned with.”

"We are honored to have Scotty represent our company as the third Denso bike alongside Matt and Angie Smith," added Denso Vice President Sales Fran Labun. "He is a talented rider and proved it with his win of the Denso U.S. Nationals and joining the Denso 200-mph Club in 2020. We are excited and look forward to his success in the 2021 season."

Pollacheck competed in 131 races and made it to seven final rounds before finally cashing in with his first victory last season in Indy. He also went to the final of the St. Louis race and was in contention for the championship until the late stages of the season, where he finished third behind teammate Matt Smith and four-time champion Eddie Krawiec. Pollacheck has raced with several teams during his long career but wanted to stay with Smith following his recent success.

“That’s one of the things I’m most happy about; being able to race with Matt and Angie and have Michael Ray as a member of our team,” said Pollacheck. “Last year, we won half of the races and finished No. 1, No. 3, and No. 5 in the points. Angie and I also got into the Denso 200-mph Club, and I got to race against Matt for $25,000 in the Mickey Thompson Pro Bike Battle. That’s an awesome job for everyone involved. That makes me more excited than usual as we get ready for the new season.”

Having finally won a race, Pollacheck now says he can relax and race without the added pressure that went with a lengthy victory drought. 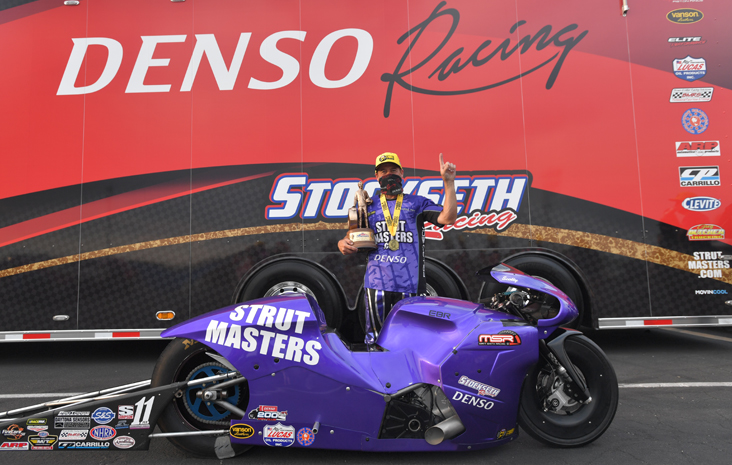 “The monkey is finally off my back, and if nothing else, it means no one will ever ask me again about when I’m finally going to win,” Pollacheck said. “What makes it even better is the fact that I won Indy and the way we did it. I was the No. 1 qualifier, got into the 200-mph Club, and beat Andrew Hines, the winningest rider in the class, in the final round. And, I was runner-up in the Mickey Thompson [Pro Bike Battle]. It was almost a clean sweep. The only downside is that my wife, Susan, wasn’t there, but I don’t expect that to be the case this year. She’s an important part of our team, and I wouldn’t still be out here doing this if not for her. She pushes me, and sometimes I need it. I’m lucky to have someone who loves this as I do.”

Pollacheck is also well aware that the landscape of the Pro Stock Motorcycle class is changing dramatically. Harley-Davidson withdrew their support of the Vance & Hines team after winning 10 championships in the last 17 years. Another significant development is the arrival of the new four-valve cylinder head for Suzuki entries. Most of the existing Suzuki teams are expected to use the new head, including world champion Jerry Savoie and Karen Stoffer. The Vance & Hines team is also preparing two new Suzuki entries for riders Cory Reed and Joey Gladstone, both of whom are looking for their first victories.

“There are certainly a lot of question marks this year, but one thing that hasn’t changed is our MSR team,” Pollacheck said. “We’ve got a great program going, and I don’t see that changing. Things will definitely be interesting, but I can’t wait to get to Gainesville to see who is fast and who’s done their homework this winter."