For Dan Horan Jr., Kin Bates, Sam Tucker, and Don Fournier, the chewing gum jingle “double your pleasure, double your fun” certainly applied to them after the conclusion of the 2021 Heritage Racing Series at Famoso Drag Strip Oct.24. All four of them were not only event winners, but national champions as well.

Horan Jr. and Bates had already secured their gold Wallys, but Tucker and Fournier, both holding slim leads in points, would have to outplace their closest rivals during class eliminations. Tucker held a one-point lead over Wes Anderson in Nostalgia Eliminator 2, and Fournier a 10-point margin over James Burt in D/Gas. But Anderson was eliminated in round two of Nostalgia Eliminator 2, and Burt in round one of D/Gas, allowing the leaders to finally exhale.

In all, the competitors were racing for Wallys and prize money in 18 categories, 13 of which were Hot Rod Heritage Racing Series classes. Also included was Fuel Altered, Pro Mod, Fuel Altered Consolation, AA/Gas, and AFX. It turned out to be a splendid weekend for the spectators in attendance who witnessed three days of close racing and record setting performances.

Bates, like Horan Jr., came to the California Hot Rod Reunion, comfortable with the knowledge that he was the 2021 Heritage Series A/Fuel dragster champion. This injected nitro dragster from Anderson, California, has dominated the A/Fuel dragster for more than a decade, winning its eleventh title since 2008. Adams-Bates also swept the performance honors setting Low E.T. at 5.873, and top speed with a sizzling 235.43 mph. In the final round of eliminations against Wayne Ramay’s blown alcohol Neil & Parks dragster, Ramay had difficulty with traction problems and Bates took advantage for a comfortable win with a 6.052 at 218.34 mph to Ramay’s 6.708 at 218.94 mph. 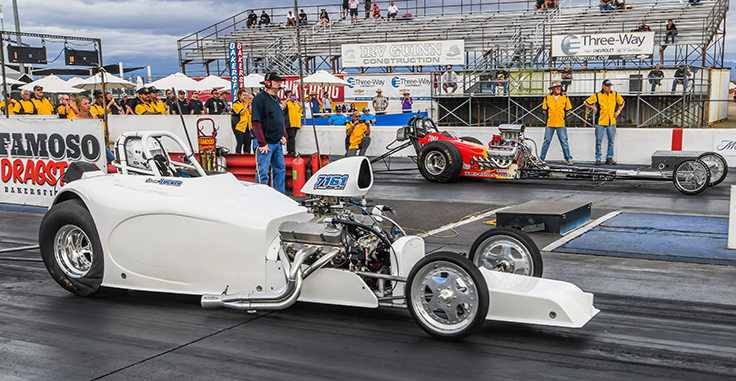 In Nostalgia Eliminator 2, the confrontation between No. 2 in points Wes Anderson and No. 1 Sam Tucker was decided in round two of eliminations. Anderson qualified number one and received a single into round two. Sam Tucker qualified eighth and had to defeat No. 22 Jerry Bonds in round one or it was game, set, match, for Anderson. Tucker’s nerves held and he easily defeated Bonds 8.664 to 8.806. Tucker’s round-two opponent was an always tough competitor in Robert Johnson. Both drivers left with the same reaction time (.027) and crossed the finish line with identical elapsed times (8.645). Tucker took the win on speed, 151.54 mph to Anderson’s 150.13 mph. Now, it was Anderson’s turn and he had Adam Westbrook’s ’32 Bantam in the opposite lane. It was another close drag race, but the win light went to Westbrook with an 8.625 to Anderson’s 8.651. In all, Tucker went on to beat five opponents including number two qualifier Eddie Lucas in the semi-finals and Terry Lindblad in the final round. What a way to get a Wally. 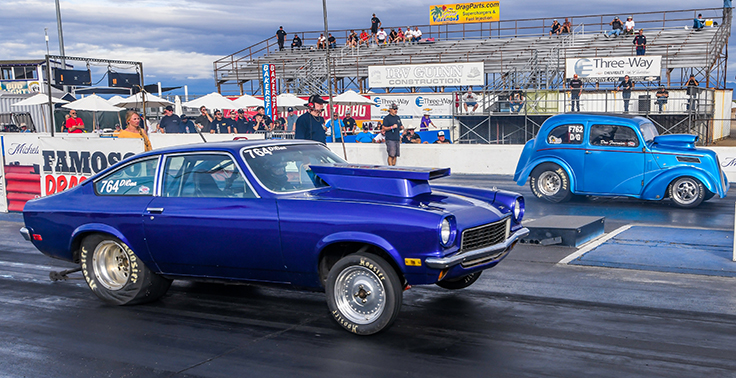 The drama was no different in D/Gas when long time drag racer Don Fournier from Sunnyvale, Calif., had to get past No. 1 qualifier Daniel Brown in the final round. Fournier was equal to the challenge and popped a .019 RT on Brown who was late on the hammer with a .169 RT. Brown then had to put it to the wood and even his 10.554 DQ time was not enough to catch an old guy with a good eye. Fournier won everything with a 10.654 at 119.18.