TV Bruno knows all about following scripts, but even he couldn’t have written a better script for Racing Bruno in 2021. Not only did he win his third Comp championship, but he did it with a new engine combination and clinched the title in dramatic fashion at The Strip at Las Vegas Motor Speedway.

With his television duties and family responsibilities, the 2021 season was the first time that Massel has chased the championship since 2013 when he finished a close second and just missed out on winning back-to-back titles following his second championship in 2012.

“Chasing the championship is pretty daunting,” he acknowledged. “It consumes a lot of time, a lot of energy, and a lot of money, and I put a lot of focus on the TV work to make sure I could pay my bills.”

But Massel and his father, Bruno Sr., realized that they’d tapped the full potential of the turbocharged four-cylinder Ecotec engine they’d been flogging in their Chevy Cobalt since 2006, so they turned to the six-cylinder Toyota 2JZ with the help of fellow former NHRA Sport Compact ace Brad Personett. 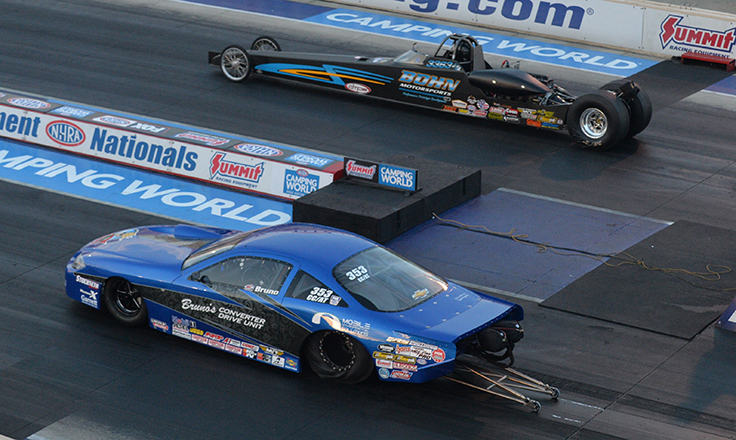 “We started working on it at the end of 2019 and ran the car twice in 2020, just to try to validate the combination. This year, we decided if we did well at the first couple of races that we would try to chase the championship. We had a setback at our first race, [the NGK NTK NHRA Four-Wide Nationals] in Charlotte, then we won Norwalk [the Summit Racing Equipment NHRA Nationals], and that set things in motion.”

The new combination was not without its quirks as on multiple occasions, beginning in Charlotte, Massel couldn’t hold the car on the starting line under boost and red-lighted.

“The car literally bounced out of the beams,” he explained. “I couldn’t get enough brake pressure to hold the car and lost three races that way. The power band was just vastly different than the four-cylinder. We did a lot of development with different brake pads and calipers. It was just a different animal, and we were learning on the fly.

“Norwalk was the first race with [experienced crewmember] Darrell Herron with me, and my whole family was there, and that was just huge for me because people don’t realize how much the family takes the wins and losses with you. To come in from Charlotte being pretty bummed out and be able to bring home a Wally, it was pretty huge.”

The brake problem struck again at the Division 3 event at National Trail Raceway and the second Division 5 race at Heartland Motorsports Park, but between the two, he notched a win at the first race in Topeka. The team finally solved the problem in early August and, after a pair of semifinal finishes, returned to the winner’s circle at the Division 5 race in Brainerd.

“Brainerd was a turning point for me because I looked at the rest of the schedule to see if I could make enough races to run for the championship,” he said. “I think I was in third then, all of us behind Pete D’Agnolo, and I didn’t think I could make it happen with my work schedule. But my son, Bruno [III], said, ‘Dad, you told me you were gonna go after this. You have to finish,’ which is what I’ve always told him, that you have to finish what you start, so I put together a plan to go out west for the six races out there [four divisionals and two nationals], knowing I’d have to win at least three. Duane Shields graciously let me keep my rig at his shop in Las Vegas for eight weeks while I flew back and forth. There was no way I could have made it happen if he didn’t.”

Massel’s schedule included two Division 7 doubleheaders – at Wild Horse Pass Motorsports Park in Phoenix and Las Vegas – and, incredibly, Massel won two of the four, both times winning the first race of the doubleheader. Winning the opener in Phoenix gave him the points lead, but he lost the lead at the second when the transmission wouldn’t make the 1-2 shift in the semi’s. 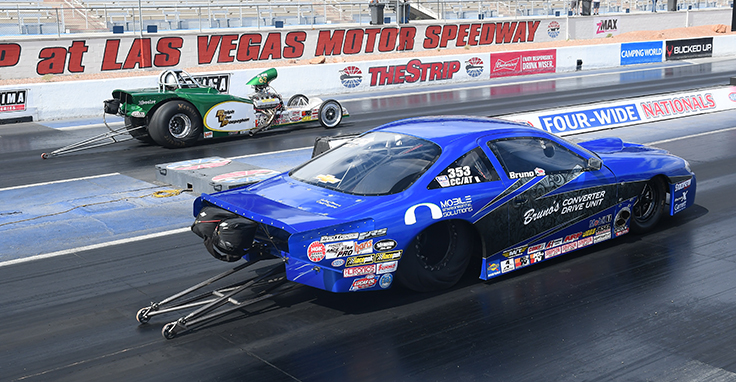 As he headed to the Las Vegas doubleheader, David Billingsley was now in the points lead, but Massel grabbed it back with a win at the first event and again bowed out in the semi’s of the second, but he now owned a three-point lead over Billingsley and headed to the Dodge//SRT NHRA Nationals at The Strip with Greg Kamplain, Cody Lane, and Dean Carter also still in title contention.

“I knew if I got to the semi’s, I would lock it up, but then I drew Billingsley in round one, which was the dream scenario for him because he couldn’t earn points there; he was just blocking,” said Massel. “I knew he would be green, and he would run to the finish line, and that’s exactly what happened. I beat him but had to run .59 under, which hurt my index.”

Incredibly, Massel had to run and beat all of his pursuers, including Kamplain in round two and Lane in round three, and took them both down, meaning that he only needed to stage the car for a semifinal bye to clinch the title.

Then his car wouldn’t start.

The crank reference sensor had gone bad, causing the engine to flood. He finally got it lit, limped cautiously to the line, and staged to clinch the title.

“I didn’t want to go out that way,” he remembered. “I didn’t want to spend the whole winter thinking that’s how my season ended; it would have taken a lot of the shine away from the championship.”

Massel then went on to beat two-time world champ Dean Carter in the final to put the icing on his championship cake.

“It was just a great way to end the season, with a national event win,” he admitted. “The other championships I won were great, but to win a race and go into the offseason for the next five months with nobody having beaten you, and having beaten the best of the best, it’s a pretty great feeling.”

“These milestones, sometimes you don’t think much about them at the time while you’re doing it, but it will be nice to reflect on it, and how you accomplished something worth talking about,” he said.