From being inducted into the North Carolina Motorsports Hall of Fame to passing mentor Warren Johnson for the most career Pro Stock victories to claiming his fifth Pro Stock championship, the 2021 NHRA season “has been one for the ages,” said Greg Anderson.

Jim Campbell, Chevrolet U.S. Vice President, Motorsports and Performance, added a distinguished cap to a memorable season by presenting Anderson with the prestigious Chevrolet Cross Flag Award during a luncheon at the KB Racing facility in Mooresville, N.C.

“Here at the shop, this is where all the hard work and the prep happens and at the racetrack you guys are on it. I loved the journey of 96, 97, 98, 99 (wins). Everyone felt it, and we were cheering for you,” Campbell said. “Thank you for the teamwork here and at the track. We are proud of you, your whole team and your family because you did this together.” 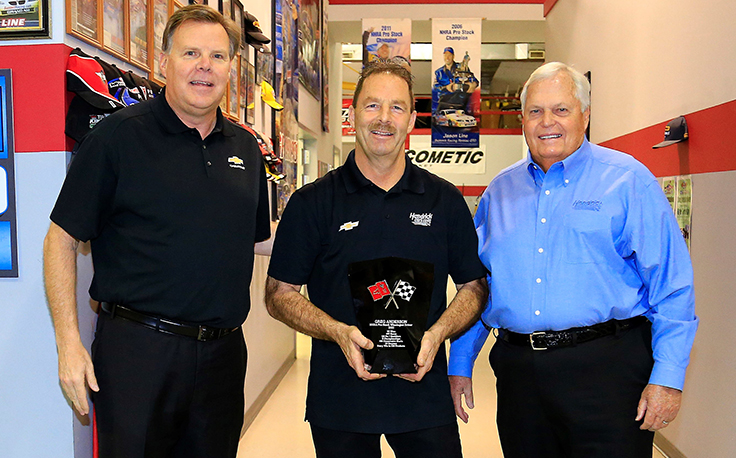 Anderson drove the HendrickCars.com Chevrolet Camaro SS to a class-high five wins and 12 No. 1 qualifying spots in 17 NHRA Camping World Drag Racing Series events. In October, he surpassed Johnson as the all-time leader in Pro Stock victories with 98. Anderson put an exclamation mark on the season by winning the season finale Nov. 15 to wrap up his fifth title and first since 2010.

“This is a great honor for me,” he said. “For the season to go on the way it did and to have the success we did, I couldn’t script it any better and I couldn’t ask for any more. I couldn’t have done it without General Motors and Chevrolet, and it’s been a great ride that’s not over.”

Anderson will look to become the second racer in the NHRA professional categories with 100 wins at the 2022 opener Feb. 20 at Auto Club Raceway at Pomona. Sixteen-time champion John Force, driver of the Chevrolet Camaro SS Funny Car, is the all-time leader with 154 victories.

Through 497 NHRA Pro Stock races in 24 seasons, Anderson has also recorded 118 top qualifier honors, an NHRA-record 416 race qualifying streak and 881 round wins (second to Force in all pro classes).

NASCAR Cup Series team owner Rick Hendrick, whose automotive group came on board to become the primary sponsor of Anderson’s Camaro for 2021, said he enjoyed watching the NHRA season unfold.

“I was drag racing before I was racing anything else,” said Hendrick, who has won the past two NASCAR Cup Series Owner and Driver championships with Chevrolet Camaro ZL1 1LE drivers Kyle Larson and Chase Elliott. “I’ve always been a big fan of Greg’s and just to be able to do the year with him and enjoy the success, I’m pretty lucky to come along and be involved. I’m proud of him. Anytime you can be the all-time guy, that’s pretty special.”

Added Anderson: “It was quite a year and there are so many special things that happened. It starts with the partnership with Mr. H. That is beyond anything I could hope for. I’ve looked up to that operation and that gentleman for so long, and now to wear his colors on the side of my race car was like flying the presidential flag every time I went down the track.”

“You both did something pretty special,” Campbell said. “These are the moments you work so hard for.”

The cross flag emblem dates to 1953 when Chevrolet interior designer Robert Bartholomew created the original design for the Chevrolet Corvette. The emblem includes a black and white checkered racing flag crossed with a red flag featuring the Chevrolet bow tie and a fleur-de-lis (the French symbol for peace and purity).

In addition to Anderson’s Pro Stock championship, Chevrolet won the NHRA Manufacturers Cup for a record-extending 26th time and fifth year in a row and KB Racing’s Dallas Glenn, driver of the RAD Torque Systems Chevrolet Camaro SS, was voted the NHRA rookie of the year recipient.