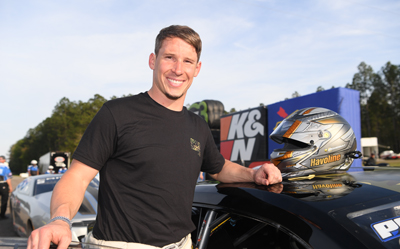 Alex Laughlin's drag racing résumé already includes stints in Top Dragster, Top Alcohol Dragster, Pro Mod, and Pro Stock, and now the versatile Texan is planning the most ambitious move of his career as he prepares to earn his NHRA competition license in Top Fuel. If all goes according to plan, Laughlin will make his debut next week at the Dodge//SRT Mile-High Nationals presented by Pennzoil.

Laughlin admits he’s always toyed with the idea of racing a 330-mph Top Fuel dragster, but that plan recently went from dream to reality when he suddenly found himself without a Pro Mod ride for the Denver event.

“This all started with us struggling in Pro Mod this season,” Laughlin explained. “Richard [Freeman, Elite team owner] didn’t want to take the Pro Mod cars to Denver. That track is really tough to get a handle on because of the altitude. Well, they aren’t racing Pro Stock in Denver, and I have some pretty big sponsor obligations to fulfill, so that left me with a huge dilemma. Denver is a huge market for Havoline, which is my biggest supporter.

“We searched high and low for a Pro Mod car, but really didn’t find anything that worked,” said Laughlin. “Then, I thought, what other category could I run? I don’t see myself ever riding a Pro Stock Motorcycle, so I started looking into Top Fuel.”

Laughlin’s first call was to Anthony Dicero, the owner and crew chief of the Gas Monkey Top Alcohol Dragster that he last drove in 2017. Together, Laughlin and Dicero pondered their options and finally called Palmer, who not only runs a very competitive operation but also has a history of helping drivers new to the category. Earlier this year, Palmer sacrificed his own race in Houston in order to help Lee Callaway.

“Anthony is a good friend, and I knew he had a strong relationship with Krista Baldwin, but the conversation eventually turned to Scott,” said Laughlin. “One thing led to another, so I’m headed to Wichita, Kan., this Sunday to upgrade my license, and if all goes well, I’ll be entering the Denver race on Monday morning.

“I’ll be honest and tell you that I don’t know Scott very well, but I’m already so impressed by what he’s doing for me,” Laughlin said. “He’s got a brand-new second car that’s ready to run, and he’s been jumping through hoops to get it ready for me. He’s even getting the back door of his trailer wrapped so we can look as professional as possible. I also like the fact that Scott is a bit like me; he’s driven a little bit of everything, and we sort of race at the same level as far as chasing dollars and trying to get the most out of what we have.”

Laughlin ran deep into the five-second zone at more than 275 mph when he drove Dicero’s injected nitro dragster, but he has no illusions when it comes to the challenge of driving an 11,000-hp Top Fuel car. To that end, he feels about as prepared as he can be.

“I like to think I’m a quick learner and a good listener,” said Laughlin. “I understand that Top Fuel is a whole different ballgame than Pro Stock or Pro Mod or event Top Alcohol Dragster. The good thing is that the process is the same as far as the burnout and staging and all that, so I’ve got a little bit of experience. And in Top Fuel, you wear the same safety gear as Pro Mod, so my helmet and firesuit are all good. I just need to get some experience.”

Laughlin maintains that for now, his plans for racing in Top Fuel include only the Denver race, but that’s subject to change. He continues to enjoy a productive relationship with several sponsors, and it’s likely they’ll dictate his career path going forward.

“For now, I just want to get my license and get through Denver,” he said. “Then again, who knows? This might open up the door to do something next year. I have a sponsor commitment to race in Sonoma, so if this all goes well, I could see us just rolling out west to do another race, but we really need to take it one step at a time. I get the feeling that once I make some runs in Top Fuel, I might not want to do anything else.”