Blake Peavler would have been the first to admit he didn’t enter the 2021 Top Dragster presented by Vortech Superchargers season with championship aspirations and ended up enjoying a season not many could have predicted.
24 Dec 2021
Josh Hachat
2021 world champion profile

Blake Peavler would have been the first to admit he didn’t enter the 2021 Top Dragster presented by Vortech Superchargers season with championship aspirations.

The 28-year-old Olney, Ill., native would have called the year a massive success just picking up his first career NHRA win. He had grown up at the track watching his dad, but Peavler was still waiting for that breakout moment in his career.

Well, that wait is officially over after enjoying a season not many could have predicted. Peavler not only won his first race, but he also added two more and then claimed a world championship, ousting a number of top names to end the year on top.

“It’s still pretty crazy,” Peavler said. “I can’t really believe it. I’ve never really had a great deal of success, so it kind of came out of nowhere.”

In the span of a few months, Peavler went from unknown to a household name in the Top Dragster ranks, winning a championship at a young age and opening a world of possibilities for the rising star.

He knocked off Tyson Fabish in the championship round thanks to a reaction time of .013 and a run of 6.412 seconds, and it’s a moment that still brings a smile to his face.

“It was the first win I’ve had of any kind. It was surreal,” Peavler said. “We went into the year not sure how we would do, and we won a few rounds in Norwalk right before Columbus, but to win that race was completely unexpected. The fact we got to bring a Wally home was just crazy. That’s something we always wanted to do.”

The car got even better, and Peavler kept his hot streak going, extending his streak of round-wins to 10 with a victory at the divisional race in Indy. The team made a converter change at that time, taking an already consistent car to another level. 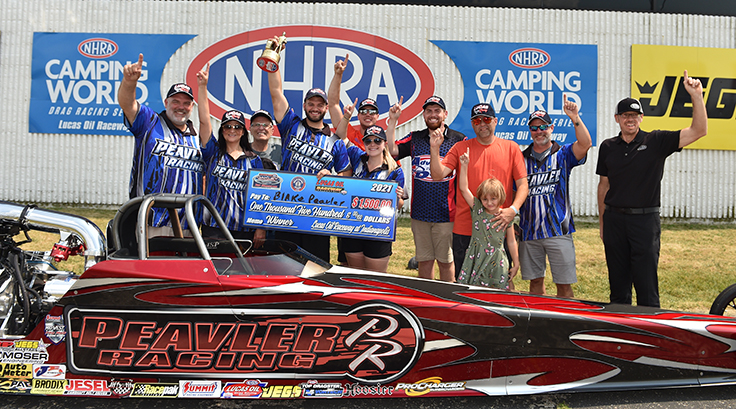 That was obvious at Lucas Oil Raceway at Indianapolis, where Peavler picked up five round-wins and a second victory. Part of Peavler was still having trouble comprehending what exactly was happening, and the other part of him began to peek at the points standings.

What was once not even a thought was now becoming reality as Peavler moved up the points standings.

“The national points were never even really a thought in my mind before those two wins,” Peavler said. “When we won the Indy divisional, that’s when we knew the car was phenomenal.”

He added a quarterfinal berth in Earlville, Iowa, and then picked up his third victory of the year, winning at the St. Louis divisional race in early October. The season had already far surpassed any expectations he had, but things got really wild after the impressive St. Louis victory.

“Winning there, that’s when it got real,” Peavler said. “We were just having the time of our lives. We all of a sudden made plans to go to Bristol, Rockingham [Dragway], and Las Vegas, and it was kind of unbelievable. You kind of had to pinch yourself and ask if this is real.”

It wasn’t a dream, though, and Peavler handled it all with impressive resolve. He never got buckled by the championship pressure or hectic late-season travel schedule, which is impressive considering it was his first time in the title mix.

But two weeks after winning in St. Louis, he advanced to the semifinals at the NHRA Thunder Valley Nationals in Bristol. He returned home to work for a few days and then went back on the road the next weekend — traveling back through Bristol, oddly enough — to race the divisional event at Rockingham Dragway.

That proved to be the clinching race, as Peavler advanced to the final round. The car broke in the final round, but it was still a strong showing and allowed him to take the points lead.

“It took a lot of planning, but the biggest thing I learned was you can’t take any rounds off,” Peavler said. “Every single round means something, and when you’re chasing points, you have to be on top of it.”

Two weeks later, Peavler traveled to Las Vegas, hoping to keep Bradley Johnson at bay. Johnson was making his own late-season charge in hopes of winning a second straight world championship, and things got even more dicey when Peavler fell in the first round.

It led to what he jokingly called the “least fun I’ve ever had in Vegas on a Saturday,” but Johnson fell in narrow fashion in the second round the next day. That gave the championship to Peavler, who admitted he was “shocked at what had just transpired.”

“His win light didn’t come on, and that feeling of knowing you had won the championship was just incredible,” Peavler said.

The surreal feeling hasn’t worn off yet, and Peavler is looking forward to the moment when he can put the “1” sticker on his dragster. With the spotlight suddenly on him, he doesn’t plan on altering his approach, relying on a formula and a consistent-performing car that led to the most special racing season in his young career.

“We got the car figured out this year. Once we got the right transmission and converter set-up, the car was deadly,” Peavler said. “That gave me so much more confidence driving-wise. It took a little time, but we strung together some wins, and knowing you’ve got a car that’s going to run the number, it just gives you a lot of confidence.”