Since the late 1990s, Jerry Emmons has practically had a reserved parking spot in the Top 10, finishing among the leaders in Super Stock and Stock nearly a dozen times, including a career-best No. 3 in 2006. In 2021, his name ended up atop the list as the Stock world champion.
27 Dec 2021
Kevin McKenna, NHRA National Dragster Senior Editor
2021 world champion profile

Since the late 1990s, Jerry Emmons has practically had a reserved parking spot in the Top 10, finishing among the leaders in Super Stock and Stock nearly a dozen times, including a career-best No. 3 in 2006.

For all their successes, both individually and as a team, the Emmons clan had won just a single NHRA Lucas Oil Drag Racing Series world title. In 1994, Harvey III won in Stock, but since then, crickets. Now, with a dream season that included three wins in five final rounds, Jerry has brought home a long-overdue second championship.

“I don’t know if it’s good or bad that it’s taken this long,” said Emmons. “I’ve been racing competitively since I was 16, so I should be either embarrassed or thankful; maybe a little of both.

“I don’t want to sound like I don’t have faith in myself, but the opportunity needs to be there. In 2017, I thought I had a good shot, but that was the year our father died. I could have gone out west after the funeral, but we decided not to. Justin Lamb ended up winning it, and he’s obviously a bad dude, so it wasn’t going to be easy. That was the last time I had a chance at it.”

Emmons came into the 2021 season with a lot of hope and a boost in confidence, especially after securing his second Indy win in 2020. He quickly deflects credit to his brothers and his friends, including Jeffrey Miller, Scotty Richardson, Gary Stinnett, and drag racing instructor Lee Zane and Bud McNasby.

“In 2018, I was struggling. I was hit or miss, so I called Lee Zane to do some consulting,” said Emmons. “Lee is great. He answers the phone every time. He also gave me some exercises that were helpful. Long story short, Lee helped reprogram my brain. I want honest criticism. I can take it. Tell me the truth. He got my confidence back. It was down in the gutter and now [I] feel like I can race competitively.

“I also knew we needed a wholesale change, so I called a meeting with my brothers, and we specifically talked about a championship,” Emmons said. “We knew we were missing something, and we fixed it. We needed to get more organized. We needed to have one person be responsible for certain tasks instead of a free-for-all” 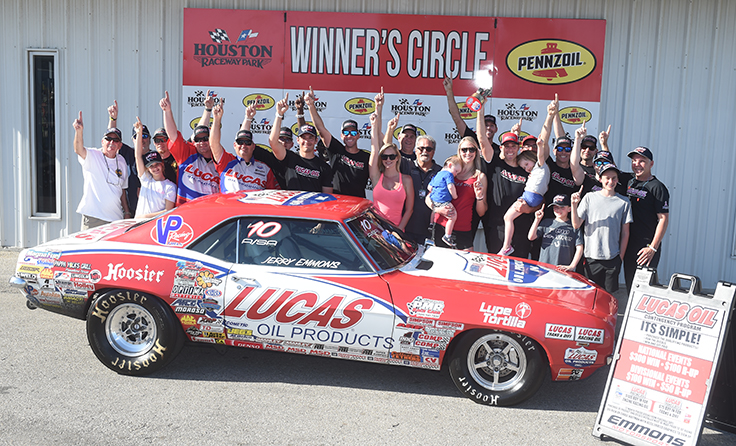 Emmons hit the ground running this season, winning the Division 4 race at his home track, Houston Raceway Park. A short while later, Emmons drove his Lucas Oil-backed ’69 Camaro to a second final-round appearance in Tulsa, Okla., and even though he lost to Don Davidson, the seeds were sown for a title run.

“When I lost the final in Tulsa, I was already thinking about the Top 10 at that point,” Emmons said. “It was only when we came out of Dallas with a win and a runner-up that I thought, ‘Oh my goodness, I really have a chance.’ I know it only takes one bad race to get cycled out, but I still had championship hopes.”

If Emmons wasn’t a favorite to win the title during the summer months, he certainly was after a magical weekend at Texas Motorplex in October. Competing in the delayed Mopar Express Lane NHRA SpringNationals presented by Pennzoil, which was moved from Houston, and the NHRA Texas FallNationals, Emmons went on a tear with a win and runner-up finish. Over the course of the weekend, Emmons won 10 of 11 possible rounds. Only a narrow loss to Brenda Grubbs in the Dallas final prevented a clean sweep.

For all his success in Dallas, Emmons still wasn’t the points leader. In fact, he didn’t take over the lead until the final weekend of the season in Pomona.

“I lost the final in Dallas, but I was happy for Brenda,” Emmons said. “I left with a win and a runner-up, and I knew what that meant long term. I wasn’t really thinking in terms of wins and losses, just round-wins and points. I knew I had a shot if I could stay focused and committed.”

Emmons had a chance to gain ground on leader Joe Santangelo in Las Vegas but missed opportunities at both the divisional and national event. Instead, he had to wait until the Auto Club NHRA Finals to lock up the title, and even that race was not without its stressful moments.

In Pomona, Emmons tried to qualify on the pole in order to get the first available bye run but missed the mark and ended up second. That proved to be a better plan as he was in line for a round-two bye if he could get past Jon Irving in round one. Emmons defeated Irving and needed only to stage for his bye to officially clinch the title. At the time, he was unaware that Santangelo was out, the victim of a rare red-light start.

“I didn’t know that I’d won it,” Emmons said. “In the shutdown area, Jimmy [DeFrank] was in front of me, and he came over and said, ‘Congratulations.’ I said, ‘For what?’ and then he told me that Joe was out. I just thought, ‘This is not real.’ Jimmy and Jody Lang and Brad Plourd were down there. It was a surreal moment.

“I thought about just staging for the bye run and backing up just to make sure I didn’t do a big wheelstand and cross the centerline. Instead, I made the decision to just drive down the track and enjoy it. I waited my entire life for this, and I was going to enjoy it. When the win light came on, it hit me.

“I don’t really know Joe [Santangelo] very well, but he’s a classy guy. He came over, and we talked for about 30 minutes. He had a chance to win two championships this year and didn’t win either of them, but I think he probably deserved it as much or more than me. I’ll forever be a fan of his.”

Emmons is adamant that he shares the credit for the championship with his family, including brothers Harvey, Gary, and Terry, wife Shauna, and kids Tinsley and Gentry, nephews Will, Landon, and Jace, and Gary’s girlfriend, Alyson Lopez.