Antron Brown's AB Motorsports and Justin Ashley Racing/Davis Motorsports have announced that they will be forming a research and development and marketing alliance between their organizations.
07 Dec 2021
Posted by NHRA.com staff
News

In another positive move to solidify their teams’ positions as top contenders in the NHRA Camping World Drag Racing Series, AB Motorsports, led by three-time Top Fuel world champion Antron Brown, and Justin Ashley Racing/Davis Motorsports, which campaigns the Top Fueler driven and co-owned by 2020 NHRA Rookie of the Year Justin Ashley, today announced they will be forming a Research & Development and Marketing Alliance between their organizations. The alliance will not only pair two of the most marketable Top Fuel stars behind the wheel but also two of the most decorated Top Fuel crew chiefs, with Brown’s Brian Corradi and Ashley’s Mike Green calling the shots on their teams’ 11,000-hp machines.

For the first time in his career, which began aboard a Pro Stock Motorcycle in 1998, Brown will take on the dual role of owner/driver of the Matco Tools Toyota Top Fuel dragster in its rookie season operating under the AB Motorsports umbrella. Brown views this strategic pact with longtime friend Ashley, who has had an ownership interest for two seasons along with Dustin Davis in the Vita C Shot Top Fuel dragster team, as a partnership which will benefit both up-and-coming team owners on and off the racetrack.

“The goal with this partnership is to make both of our programs stronger overall,” explained Brown, who closed out 2021 ranked in the Top 10 for the 24th consecutive year. “Even though we’re two separate teams with two separate operations, having this partnership will allow us to enjoy many of the advantages that the multi-car teams have. It’s not just about the collaboration between our brain trust of crew chiefs, but this will also help us in being able to secure the best parts and pieces; we’ll have stronger purchasing power. We’re both looking to this alliance to help us compete on a high level and go toe-to-toe with the heavy hitters in our category.” 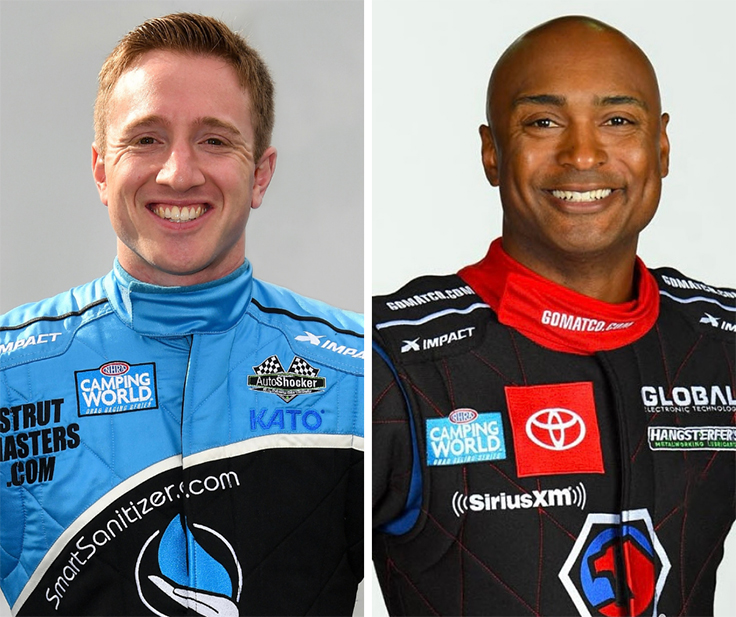 “I am excited to be joining forces with Antron and his team. This alliance is going to improve the performance of both our programs on and off the racetrack,” said Ashley, the 2021 Texas NHRA FallNationals Top Fuel winner. “My team has made great strides the past two seasons with our Vita C Shot Top Fuel dragster and now is the time to keep moving forward in an effort to establish a high level of success for years to come. Getting our crew chiefs together to share on-track and off-track technical information is invaluable. When it comes to marketing, working together opens the door to so many possibilities for our existing partners and any new relationships we start in 2022 and beyond.”

The research and development alliance will include sharing of on-track data as well as consultation between the teams during and between NHRA national events. Additionally, Ashley will benefit from Brown’s long-running 14-year partnership with Toyota. As part of his association with AB Motorsports,  Justin Ashley Racing/Davis Motorsports will have access to engineering and on-track technical assistance at all 22 Camping World Series events.

Away from the dragstrip, Ashley and Brown, along with their respective marketing representatives, will work together to present programs to potential sponsors throughout the 2022 NHRA Camping World Drag Racing Series to create one of the most marketable one-two punches in motorsports.