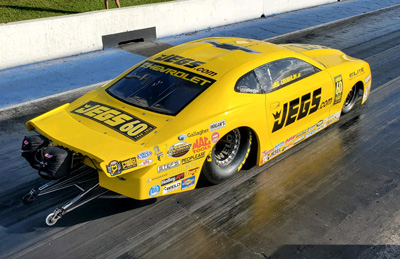 Little known fact; Troy Coughlin Jr. was scheduled to make his NHRA debut in the Pro Stock category in March at the Amalie Motor Oil NHRA Gatornationals. Coughlin was called in as a last-minute replacement for Vincent Nobile as a member of the Elite team, but his debut was pushed back when the season was halted due to the Covid-19 pandemic.

Now, the third-generation driver will finally get his chance to display his versatility during this week’s E3 Spark Plugs NHRA Nationals in Indianapolis. Rookie driver Marty Robertson is unable to attend the Indy race, which marks the resumption of the 2020 NHRA season. When it came time to choose a replacement, Elite team owner Richard Freeman’s first call was to Coughlin, and he didn’t have to ask twice.

“This is so unbelievable; I’m extremely jacked to finally run a national event in Pro Stock,” said Coughlin, who will be driving a Chevy-powered Mustang for a stacked Elite team that also includes his uncle, Jeg Jr., Erica Enders, Alex Laughlin, Aaron Stanfield, and Bruno Massel. “This is such a cool class to jump into. Richard called me last Tuesday and asked if I wanted to drive and I told him to count me in. I’ve been waiting to do this for a long time for this and I can’t wait to get out there and mix it up with the best Pro Stock drivers in the world.”

Already a national event winner in Top Alcohol Dragster, Super Comp and Super Gas, Coughlin also has experience in Pro Mod and Top Fuel. Last January, he got the opportunity to expand his resumé even further when he wheeled his uncle Jeg’s Elite Camaro Pro Stock car during a test session in Bradenton, Fla. The third-generation driver proved to be a quick study with several highly competitive runs. Coughlin also raced to a quarterfinal finish in his Pro Stock debut at the Doorslammer Nationals event in Orlando. Although he hasn’t dumped the clutch pedal on a Pro Stock car in more than four months, Coughlin doesn’t expect to be rusty when qualifying begins on Friday, July 11.

“I haven’t been in a Pro Stock car since we ran the Orlando race in March but there is a test session on Thursday, so I hope to get a couple of runs,” said Coughlin. “Seat time is seat time, but I have no expectations. My mindset is simply the desire to continue my learning curve in the cognitive machine called a Pro Stock car.

“From past experience in other cars, I know what to expect, and you just take it one execution at a time. You do your best on each burnout, each launch, each gear change and each run. Of all the cars I’ve raced, Pro Mod would be the most correlating, but Pro Stock still required a whole different mindset. There are a lot of new things to learn.” 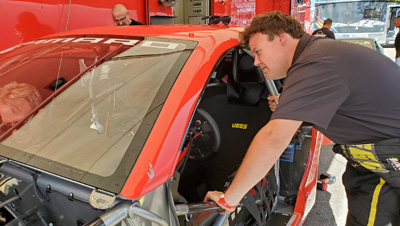 In recent weeks, Coughlin has been keeping his skills sharp by bracket racing his JEGS.com dragster at several big money events across the country. He competed in the K&N Spring Fling at GALOT Motorsports Park and spent last week racing alongside his sister, Paige, uncle Jeg, aunt, Samantha, and cousin, Makenna Brown at the SFG Million event in Michigan.

“All that bracket racing will definitely help you get in a rhythm a little quicker as far as doing the same thing every time,” Coughlin said. “Repetition is the name of the game out here. My dragster is a bit different, but I’m still hitting the Tree and trying to make consistent runs.

As much as he would love to have raced in Gainesville, Coughlin is equally as excited to make his Pro Stock debut at Lucas Oil Raceway Indianapolis, a track where his family has enjoyed much success over the years. Troy Jr. won the U.S. Nationals Super Comp title in 2010 and returned to win NHRA’s most prestigious event again in 2014 in the Super Gas class. Father, Troy Sr. also won his first national event title at Indy in 1991 when he won in Super Gas.

“Anytime you race in Indy it’s absolutely huge,” said Coughlin. “That place is like another home track for our family because it’s just three hours East of us. I learned how to walk there. It’s an historic track and to be able to race a there during the 50th anniversary of the Pro Stock class is just too cool. I can’t wait to jump in and learn all I can and feed off of my uncle, Jeg, and Erica and the rest of my teammates.”