For all the challenges of 2020, NHRA’s sportsman racers were blessed to compete in 14 national events (including three JEGS SPORTSnationals races) and 41 Lucas Oil Drag Racing Series divisional and regional events. Those events produced so many highlights that it was nearly impossible to pick out a list of even 10that stood out from the rest. Regardless, we've chosen a few memorable moments that won't soon be forgotten.
11 Nov 2020
Kevin McKenna, NHRA National Dragster Senior Editor
News

For all the challenges of 2020, NHRA’s sportsman racers were blessed to compete in 14 national events (including three JEGS SPORTSnationals races) and 41 Lucas Oil Drag Racing Series divisional and regional events. Those events produced so many highlights that it was nearly impossible to pick out a list of even 10 that stood out from the rest. Regardless, we've chosen a few memorable moments that won't soon be forgotten. In no particular order, here is our list of the Top 10. 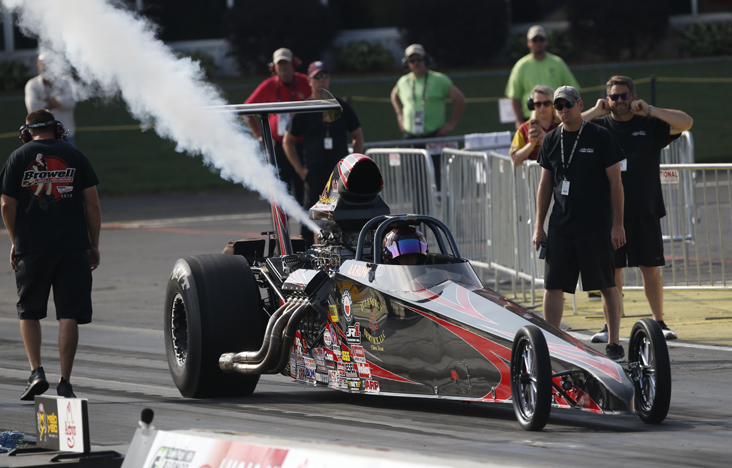 By now, most NHRA fans know about Aaron Stanfield’s incredible 2020 season. The third-generation racer not only won his first Pro Stock race in Houston, but also dominated the SAMTech.edu Factory Stock Showdown by winning five of six races and the season championship behind the wheel of the Janac Bros. COPO Camaro. However, did you know that Stanfield also won the South Central Division Top Dragster championship? Indeed, Stanfield wheeled his six-second dragster to a win at the Division 3 Lucas Oil Series event at Lucas Oil Raceway at Indianapolis and posted runner-up finishes in his home division in Dallas and Houston to help secure the title. Stanfield’s respectable total of 346 points was enough to hold off challengers J.R. Baxter and Frank Young.

No matter the category, driver, or event, perfect runs remain a very rare commodity at NHRA events so when Tim Gillespie pulled off the uncommon feat during the sport’s biggest event, the Denso Spark Plugs NHRA U.S. Nationals, it’s big news. On Saturday morning at Indy, Gillespie, of Xenia, Ohio, staged his ’33 Ford roadster against veteran Bill Jackson. The race ended quickly when Jackson red-lighted, and using the opportunity for a free time trial, Gillespie hit the bullseye with a .000 reaction time and then lit up the scoreboards with a perfect 9.900 elapsed time. Gillespie ultimately went to the fifth round in Super Gas where he broke out by four thousandths of a second against Jacob Elrod. 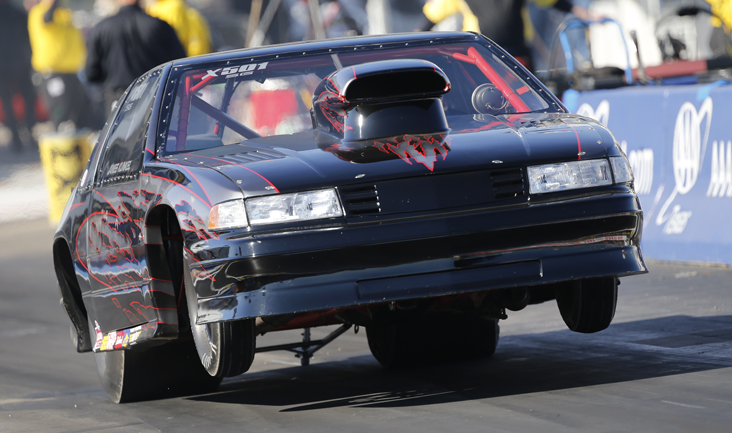 James Kunkel has won national events in Super Street, Super Gas, and Super Stock, so we’ve long known that he’s a versatile driver but the feat he pulled off in 2020 goes way beyond the norm. In a class filled with dragsters, Kunkel drove his Chevy Lumina to a Top 10 finish. Kunkel’s Lumina isn’t the only door car in Super Comp, but it sticks out like a sore thumb due to its 120-130 mph top speeds, which are well below the class average which tends to run in the 160-180-mph range. Kunkel’s unconventional approach paid big dividends this season when he won the Division 5 Super Comp title with a robust 416 point score. Kunkel’s breakout performance came when he won both ends of the double-header event in Topeka, winning 15-straight rounds. Kunkel finished the season ranked No. 5 in the world in Super Comp. By our count, he’s first driver to post a Top 10 finish in a door car since Mike Ferderer finished second to Edmond Richardson in 1992. 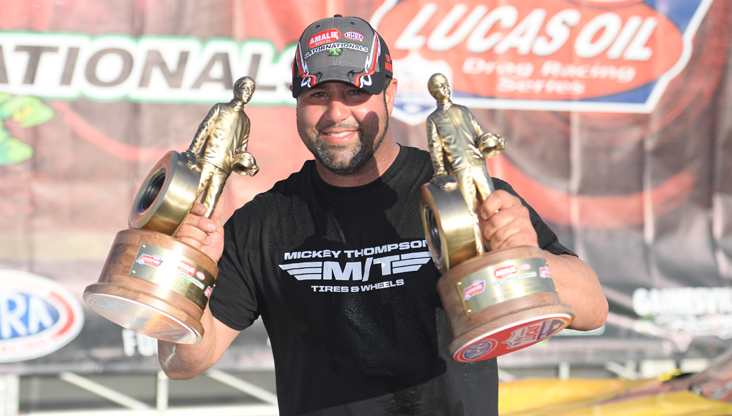 No one wanted to see the 2020 season get mothballed for three months due to the COVID-19 pandemic, especially David Latino. The Division 4 ace rolled into Gainesville Raceway in March for the Amalie Motor Oil NHRA Gatornationals and left with a pair of Wally trophies after winning the Super Stock and Stock titles. The sportsman portion of the Gatornationals was completed on Friday, March 13 and the hectic one-day eliminations made for a busy day. Latino won the Super Stock title after Anthony Bertozzi fouled and then earned the Stock win after Frank Aragona Jr. also fouled. For the record, Latino was the 27th different driver to double at an NHRA national event, although Aaron Stanfield later became the 28th to accomplish the feat.

Emmons brothers double-up at Indy in Super Stock and Stock

Texas based Emmons brothers; Harvey III and his identical triplet siblings Terry, Jerry, and Gary have combined to win a lot of races including 45 NHRA national events. The Emmons bros have even doubled up in the past most notably at the 1999 Memphis race where Terry and Harvey won in Super Stock and Stock. More than a decade later, Jerry and Gary both claimed wins at the 2011 Dallas event. For all their success, the Emmons brothers may have their crowning achievement after Terry earned the Super Stock title and Jerry won in Stock at the Denso Spark Plugs U.S. Nationals. Jerry previously won Indy in 1994 but to double on the sport’s biggest stage is certainly something the family will be hard pressed to top. 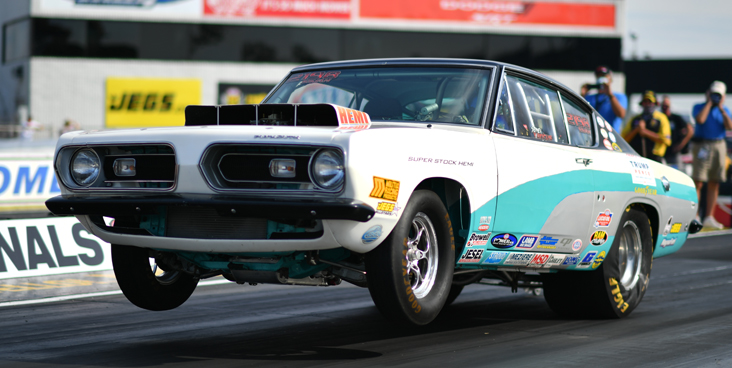 All good things must come to an end, or so goes the old saying. For four years, Jimmy Daniels was the king of the Dodge Hemi Challenge event held annually at Indy but his 14-round win streak came to an end this season. Daniels was heavily favored to win the special event for a fifth time, but lost a close race against Joe Teuton in the opening round. That opened the door for South Carolina’s Stephen Yantus to win his first Hemi Challenge race, and the $15,000 prize that goes with it. Driving his ’68 Barracuda equipped with a 426 Hemi built by former Hemi Challenge champ Charlie Westcott Jr., Yantus qualified No. 1, set low E.T. and top speed of the event with an 8.410, 158.65 run, and completed the rout with a win against Steven Comella in the final round.

All in the family for the Worners, Romeros, and Boicescos 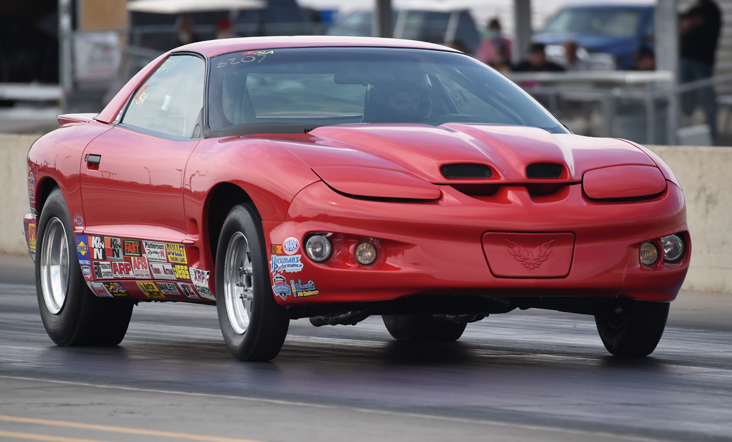 Brothers Bryan and Byron Worner made headlines for their 1-2 finish in the battle for the Lucas Oil world title in Super Stock but the 2020 season was also memorable for the Romero and Boicesco families. In Division five, Jeremy Romero (pictured) bested his father, Ted, to win the Stock Eliminator title, finishing first by just 20 points. Ted Romero put together a solid campaign with a win at the second event in the annual Division 5 doubleheader in Topeka followed by a runner-up finish at the late-summer event in Acton, Mont. For all his success, Ted came up 20 points short against 22-year old Jeremy. The younger Romero kick started his championship run with a runner-up at the first half of the Acton doubleheader and then finished the job late in the season when he reached the final round of the Division 7 event a The Strip at Las Vegas Motor Speedway. The Boicesco’s also had a weekend they won’t soon forget when former world champion Iggie won the Super Gas title at the Division 2 race in Rockingham and then watched his daughter, Amanda, win in Super Comp to help clinch a Top 10 finish. 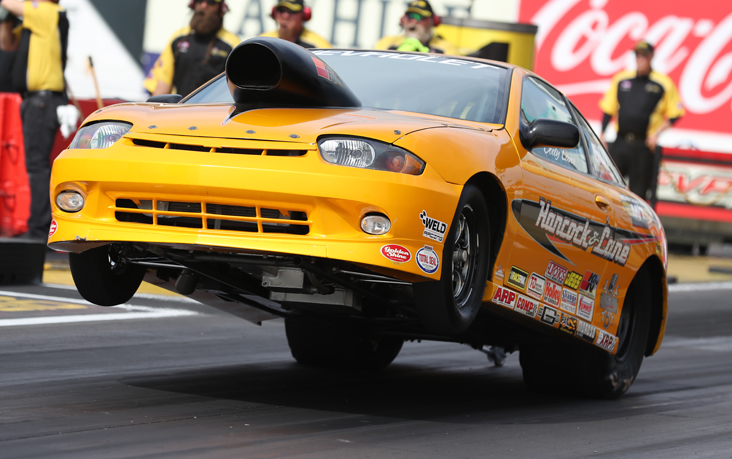 Winning one championship during the COVID interrupted 2020 season was difficult enough for most racers but Cody Lane managed to double up when he finished as the Division 6 champion in Comp and Super Stock Eliminator. In Comp, Lane kicked off the season with a win at his home event in Seattle and then earned a win and a runner-up at the doubleheader race in Acton, Mont. Although he only competed in six events, he scored enough points to hold off John Edwards. Lane’s drive to the Super Stock title was a bit more difficult. He did not appear in a final, but used semifinal finishes in Acton and Sonoma, along with a couple of quarterfinals to hold off second place Tom Gaynor by just 10 points. Lane’s success on the divisional side helped fuel a pair of strong finishes on the national level. He finished No. 7 in Comp and a respectable No. 23 in Super Stock.

Super Street class makes its debut at the U.S. Nationals 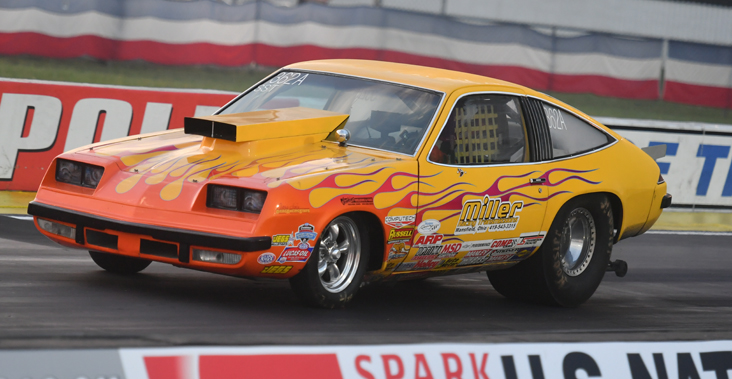 Decades from now, Ray Miller II will be the answer to the trivia question, “Who won the first Super Street title at the U.S. Nationals?”  When the JEGS Allstars race was moved to Indy, the 10.90 index class was added to the roster in order to give racers multiple opportunities to compete. Not surprisingly, the inaugural event attracted the best racers from across the country. When it was over, Miller was the last driver standing after defeating Mark Smith in the final. Miller highlighted the win with a great run that included a .004 light and a 10.905. Miller may have been the first Super Street winner at Indy, but he won’t be the last. With the recent announcement that the JEGS Allstars would be back at Lucas Oil Raceway at Indy in 2021, it’s a given that Super Street racers will once again be part of the program.

Sportsman racing legend David Rampy announced his retirement after the 2019 season after 100 national event wins and three world championships but when the opportunity arose to make one more start, he could hardly refuse. That opportunity came after Rampy was the qualifier in Super Stock for the JEGS Allstars race at Indy. For all his success in the sport, Rampy had never won a JEGS Allstars title and this represented almost certainly his final chance to do so. Rampy borrowed a car from four-time Super Comp world champion Gary Stinnett for the event and while a storybook ending would have included in either the JEGS Allstars or the U.S. Nationals, it wasn’t to be. Rampy fouled in the semifinals of the Allstars race against eventual winner Kyle Rizzoli and then lost his second-round race against David Neal closing the book on a Hall of Fame career.