Terry McMillen and Matt Hagan made the quickest runs of the day in Top Fuel and Funny Car, respectively during the second day of open testing at Lucas Oil Raceway Indianapolis. The runs were made in advance of the E3 Spark Plugs NHRA Nationals, which begins tomorrow.
10 Jul 2020
Kevin McKenna, NHRA National Dragster Senior Editor
News

Terry McMillen and Matt Hagan made the quickest runs of the day in Top Fuel and Funny Car, respectively during the second day of open testing at Lucas Oil Raceway Indianapolis. The runs were made in advance of the E3 Spark Plugs NHRA Nationals, which begins tomorrow. Five-time world champion Jeg Coughlin Jr. and three-time champion Matt Smith also led the way in Pro Stock and Pro Stock Motorcycle respectively.

McMillen, the winner of the 2018 U.S. Nationals at Indy, debuted his new in-house chassis and turned in the quickest pass of the day with an early-shut off 3.817. According to crew chief Rob Wendland, the new chassis is constructed of a thicker wall tubing, making the entire car more rigid than the team’s older chassis. McMillen, like almost every other nitro driver who participated in the two-day test, shut off well before the finish line in an effort to conserve parts ahead of Saturday’s two qualifying runs.

Current points leader Doug Kalitta made a solid 3.825 second run in his Kalitta Motorsports dragster, which is sporting a new wrap that will officially be unveiled next week. The team will revert to their traditional Mac Tools colors for the rest of the weekend. Kalitta’s teammate, Shawn Landon, was busy with a pair of solid runs including a 3.880 and a 3.912. Leah Pritchett also found the three-second zone with a late afternoon 3.88, 275.26 in her Mopar dragster. All four DSR Top Fuel entries made runs including eight-time world champ Tony Schumacher, who is returning to the class after a lengthy absence. 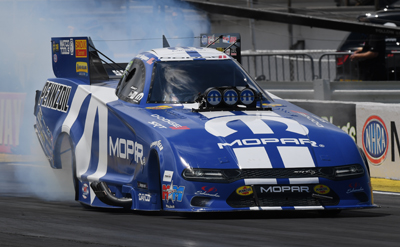 Another Mopar backed entry led the Funny Car field with two-time Mello Yello Series champ Matt Hagan taking his Dodge Charger R/T to a comfortable 4.040, 287.66 to lead the way over Jonnie Lindberg, who is filling in for Bob Tasca III, who continues his recovery from a bout with the COVID-19 virus. Lindberg made several runs over the two-day test to familiarize himself with Tasca’s Motorcraft Ford Mustang and impressed with a 4.043 at just 221-mph.

Alexis DeJoria also made a couple runs in her Del Worsham-tuned Rockit Phones/ABK Beer Toyota including a 4.069 while Jack Beckman turned in a 4.095 in his Infinite Hero Dodge and Blake Alexander drove Jim Head’s Pronto Mustang to a 4.120, 262.18. There are 18 Funny Cars competing for just 16 available spots tomorrow with qualifying complete after just two runs. 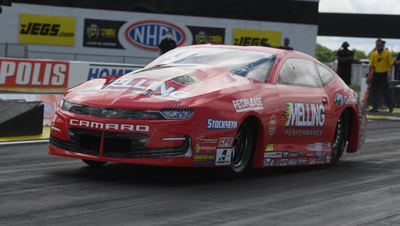 There is a huge field of 22 Pro Stock cars at Lucas Oil Raceway and based on early testing results, they are mostly in a tightly-packed group. Jeg Coughlin Jr. made the quickest run of the test with a 6.627 while Elite teammates Erica Enders and Aaron Stanfield are close behind at 6.640 and 6.647 respectively. Greg Anderson also clocked in with a pair of solid runs, 6.648 and 6.653 in his Summit Camaro. A host of other Pro Stock drivers made runs in the 6.6-second range setting up and epic qualifying battle on Saturday.

Perhaps most impressive is the performance of third-generation racer Troy Coughlin Jr., who is making his Pro Stock debut this weekend. Coughlin made several runs in his JEGS.com Mustang and he was able to produce competitive reaction times of .011 and .012 on at least two of those runs. Coughlin is joined by fellow young guns Mason McGaha and Kyle Koretsky, who are also making their professional debuts this weekend. 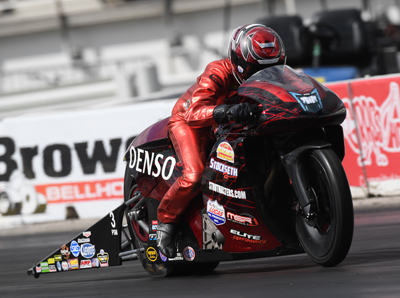 The Pro Stock Motorcycle battle figures to be equally as competitive as NHRA’s two-wheel crowd gets their first opportunity to hit the track this season. Matt Smith rode his Denso EBR to the quickest pass of the test with a 6.868 at over 195-mph but the three-time champ has company in the form of Harley-Davidson teammates Andrew Hines and Eddie Krawiec who were both solidly in the 6.8s. The Pro Stock Motorcycle class was particularly active during the test with some riders making as many as four or five runs. Steve Johnson ran as quick as a 6.920 on his Suzuki while Angelle Sampey, Ryan Oehler, and Hector Arana Jr. also received six-second time slips.

Friday’s on-track action also included testing for the Oakley Performance Top Sportsman and Top Dragster series, and the JEGS Super Quick series, which are sharing the stage with the Mello Yello Series pros.