The Elite Motorsports team has announced plans to field three full-season entries in the E3 Spark Plugs NHRA Pro Mod Drag Racing Series in 2021. Alex Laughlin, who ran two events for the Elite team in 2020, will return and will be joined by three-time NHRA Pro Mod champion Rickie Smith and well-known outlaw class racer Lyle Barnett, who will be making his NHRA debut this season.

The addition of Smith is the latest surprise move for the Elite team. Smith plans to park his own nitrous oxide-assisted Camaro in order to race a ProCharger-powered entry for the first time in his long career. Smith is expected to debut a new car in early 2021 but also hopes to get a car in the interim and be ready to test in January. He’ll have his own sponsors and will work alongside Modern Racing’s Justin Elkes when it comes to tuning. 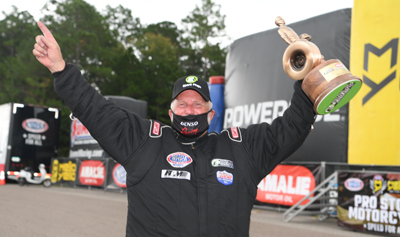 Smith drove his Camaro to a win at the Amalie Motor Oil NHRA Gatornationals last year on his way to a seventh-place finish in the Pro Mod class. For all his success with a nitrous car, Smith believes the ProCharger combination, which was introduced in 2020, gives him the best chance for success moving forward. A recent NHRA rules revision that requires driver-operated shifts on all Pro Mod cars also helped influence Smith’s decision.

“I’m really excited for this opportunity,” Smith said. “I’m over fighting about the nitrous car. I’m not going to keep running from behind. If you want to win, you have to be ready to make decisions and make moves. I’m hoping it will be good, and I think it will be. I’ve got a lot to learn, and some got a head start on us, but that’s OK. Why not go with something that’s proven to run this well? I think we can come out and run well. Richard [Freeman] is excited about it; he’s as excited as I am. He’s like me, he wants to win, and I think we can do that. Whether I can win, or Alex or Lyle, we’ll have three runs to look at, and that’s going to be big.”

Barnett, 29, comes to the Elite team following a long and successful career as one of the sport’s premier Outlaw/Drag Radial racers. He will also be racing a ProCharger-equipped Camaro built by Rick Jones Race Cars. Barnett’s career was put on hold in 2015 after he suffered severe burns in a racing accident. Since his return, Barnett has enjoyed considerable success in small-tire events, including back-to-back wins in the team challenge racing reality show Horsepower Wars. Barnett understands that racing a 5.6-second Pro Mod car will be an adjustment, but he’s eager to get started. 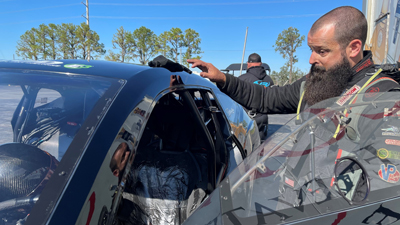 “It’s almost unbelievable how quickly and how smoothly this deal has come together,” Barnett told Drag Illustrated. “I stopped by Modern Racing and had a casual conversation with Justin Elkes, and the next thing I know we’re flying to Dallas, meeting with Richard [Freeman] and company to discuss the details, and a couple of weeks later, we’re planning a test session and getting organized to make a full pull in the NHRA next year.

“Our immediate plans are to test, test, test,” said Barnett. “We’re expecting engines to arrive at Modern Racing from Elite Performance in the next few days, then Justin and his team will have the car together, and we’re headed to the track. Justin has been incredibly accommodating throughout this whole deal, and he wants us to focus entirely on me getting comfortable in the car — from the staging lanes to the water box to the starting line to the shutdown area and everywhere in between. The plan is to make 40-50 laps before the start of next season, so that when we show up to race — we’re prepared to win.”

Laughlin, who also won in Gainesville en route to a No. 6 finish in the Pro Stock class, plans to pull double duty this season with the addition of a ProCharger-powered Mustang that is owned by Marty Robertson. The versatile Laughlin believes the addition of new teammates will only help accelerate the learning curve for the Elite crew. 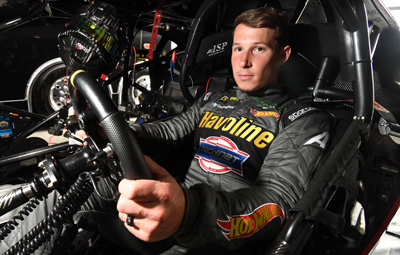 “I’m so proud to be able to drive this car for Marty Robertson and Elite HP,” said Laughlin. “It’s a huge opportunity, and I’m incredibly thankful they’ve allowed me to pilot this new ’67 Mustang. What I’m also excited about is that now the cars have to be manually shifted, and I think that is a huge advantage for our team. The cars were too easy to drive before and made it even more dangerous because, basically, anyone could hold on tight, close their eyes, and use the fake it until you make it approach.”

Team owner Freeman, who recently celebrated his fourth NHRA Pro Stock championship with driver Erica Enders, is thrilled to be expanding the Elite Pro Mod effort but realizes there is still much work to be done in order to achieve the level of success he’s accustomed to. Freeman sees the addition of Smith as a key component in his desire to win races and championships.

“I got a phone call from Justin Elkes saying that Rickie Smith wanted to find a little more out about our program,” said Freeman. “One thing led to another, and now we have three full-time entries for the Elite Pro Mod program next year. Lyle, Alex, and Rickie are an absolute dream team for this class, and we look forward to watching our program continue to progress. We are new to Pro Mod, and it’s no secret that we’ve had our growing pains, but if the way we ended last year doesn’t show the world what we already knew, you’ve missed it. We will be winning races. With a team like this, how could you not? Rickie is one of the best that has ever been down a quarter-mile, and he’s the perfect addition to Team Elite.”