Next up: Amalie Motor Oil Gatornationals promises to be worth the wait

Six months later than anticipated, the Amalie Motor Oil NHRA Gatornationals will take place at historic Gainesville Raceway on Sept. 25-27 and it promises to deliver all the excitement and drama that fans have come to expect.
18 Sep 2020
Posted by NHRA.com staff
News

Six months later than anticipated, the Amalie Motor Oil NHRA Gatornationals will take place at historic Gainesville Raceway on Sept. 25-27 and it promises to deliver all the excitement and drama that fans have come to expect. The packed schedule will feature NHRA Mello Yello Drag Racing Series competition in Top Fuel, Funny Car, Pro Stock, and Pro Stock Motorcycle, as well as a full roster of Lucas Oil Drag Racing Series sportsman competition.

Gainesville will also host the E3 Spark Plugs Pro Mod Series, SAMTech.edu Factory Stock Showdown, and Mickey Thompson Top Fuel Harley series. As if that wasn’t enough, there will also be a jet car exhibition, an appearance by the Southeast Nostalgia Pro Stock Group to help celebrate the 50th anniversary of the Pro Stock class, and a vast collection of hot rods and vintage race cars on display in Hot Rod Junction. 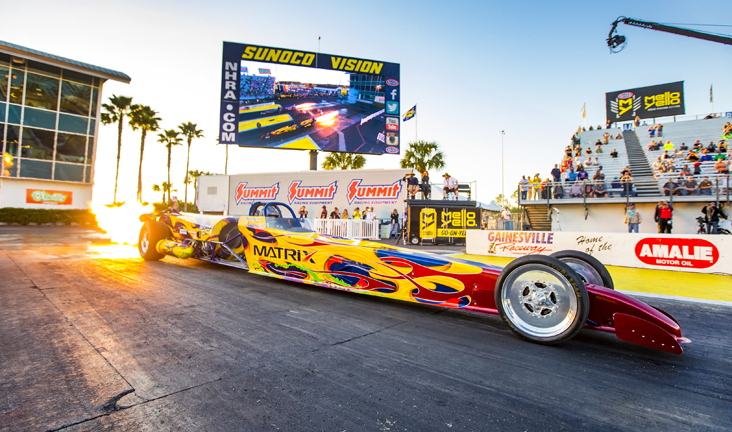 On Friday, after the conclusion of Top Alcohol qualifying, and Saturday after the second professional qualifying session, the two-car jet dragster team from Larsen Motorsports will light up the night sky over Gainesville Raceway with a thrilling high-speed exhibition.

Gainesville Raceway has been home to some of the most memorable moments in the history of the Pro Stock, so it’s fitting that the event will feature an homage to the Factory Hot Rod class. The Southeast Nostalgia Pro Stock Group will bring six vintage cars to Gainesville. Veteran racer Frank Teague currently pilots the a Chevy Camaro that is a tribute to the car that Jerry Eckman drove to his first win at the 1987 Englishtown race. Teague will match race against C.J. Curtis, who drives a 1994 Dodge Avenger that pays tribute to the Mopar Dodge driven by two-time world champion Darrell Alderman. 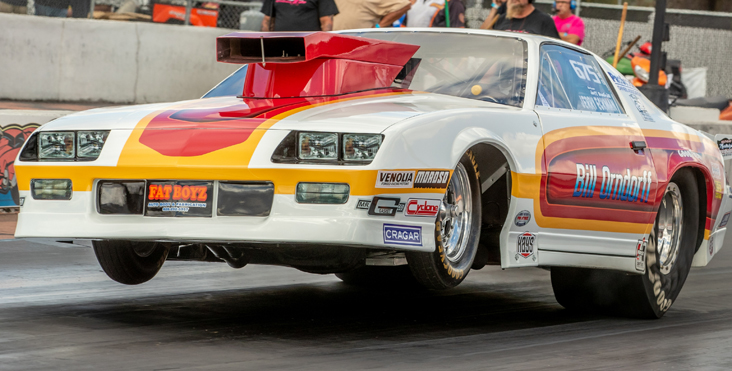 Including the Gainesville race, there are five events remaining this season to determine the 2020 Mello Yello Drag Racing Series champions and the battles in each of the four pro classes are wide open, especially with the final event, the Dodge NHRA Finals presented by Pennzoil offering a points-and-a-half structure, making a win with 150 points instead of 100.

During his long career in Top Fuel, Doug Kalitta has won just about everything there is to win except a world championship but there is a good chance that changes this year. Kalitta heads into the homestretch leading Leah Pruett by 50 points and he is 60 points in front of two-time and reigning world champion Steve Torrence. Kalitta has enjoyed considerable success in the Sunshine State with Gainesville victories in 2000, 2005, and 2014, and he’s a perfect 4-0 in final rounds.

Led by Indy winner “Fast Jack” Beckman, DSR drivers occupy three of the top four spots in the Funny Car standings. Matt Hagan is currently 35 points behind Beckman while Tommy Johnson Jr. is 57 points back as he pursues his first title. Indy runner-up J.R. Todd and Ron Capps round out the top five, but they trail Beckman by 131 and 140 points, respectively, so there should be a greater sense of urgency in those two camps.

Barring a late-season rally, the race for the Pro Stock title is down to three drivers with three-time and reigning champion Erica Enders nursing a slim seven-point lead over her teammate, Jeg Coughlin Jr. Jason Line is close behind, just 11 points out of first place. Both Coughlin and Line have announced that this will be their final season as full-time pros in the Mello Yello series so this almost certainly their final shot to win another title. Enders has 27 wins in her career but none of them have come in Gainesville although she was a runner-up in 2006 and 2014.

Pro Stock Motorcycle racers have competed in just three events thus far and will have a total of eight races to determine the 2020 champion which means there is plenty of room for a rider to come from behind and win the title. Currently, Indy winner Scotty Pollachek is the front-runner with a 25-point lead over second-ranked Andrew Hines with Eddie Krawiec, Matt Smith, Angelle Sampey, and Ryan Oehler all well within striking distance. In fact, the entire top ten is separated by just 114 points which means the title is very much up for grabs. Although Hines is the defending Gainesville winner, the advantage might lie with Harley-Davidson teammate Krawiec, who has won the Gatornationals in six of the last 10 years. 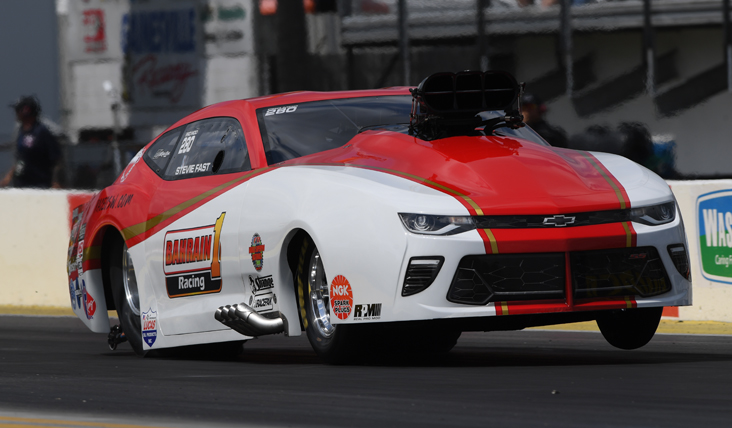 At last year’s Gatornationals, Todd Tutterow defeated Steve Jackson in the one of the best races in the history of the E3 Spark Plugs Pro Mod series. Tutterow used a starting line holeshot to take a 5.66 to 5.64 win in what is still the quickest side-by-side race in the history of the class. Now Jackson, fresh off his U.S. Nationals victory with his supercharged Bahrain1 Camaro, will be seeking redemption. Jackson comes into Gainesville with a slim three-point lead over Jonathan Gray, who is competing as a teammate to three-time series champ Rickie Smith. With just three of seven races in the books, there are still more than a dozen drivers still in contention for the series title including former champs Mike Janis, Khalid alBalooshi, and Mike Castellana.

After winning his first SAM Tech.edu Factory Stock title at the Denso NHRA U.S. Nationals, Aaron Stanfield comes into Gainesville as the class’ leader over Indy runner-up Mark Pawuk with Jesse Alexandra, Daniel Condon, Arthur Kohn, and David Barton still very much in the mix for the title. Both Stanfield and Pawuk have appeared in previous final rounds in Gainesville. Pawuk was a runner-up in Pro Stock at the 1995 Gatornationals while Stanfield was runner-up to teammate Stephen Bell in Factory Stock in 2018.

Having won four of the first five events of the season, Randal Andras has all but locked up the title in the Mickey Thompson Top Fuel Harley class. Andras has recorded wins in Pomona and the three races held at Lucas Oil Raceway in Indianapolis including the recent Denso NHRA U.S. Nationals. Jay Turner, Tii Tharpe, and Ricky House are among the riders who are expected to challenge Andras for the win. Also worth watching is Bob Malloy, who re-set the class record with a blistering 6.09-second run at Indy.

A limited number of tickets are on sale now for Amalie Motor Oil NHRA Gatornationals. Tickets may be purchased by visiting NHRA.com or calling 800-884-NHRA.