When the NHRA’s Return to Racing continues this weekend at the Lucas Oil NHRA Summernationals, Joe Morrison will complete his lifelong dream of racing a Top Fuel dragster in NHRA national event competition when he buckles into the Leverich Family dragster for his professional debut.
13 Jul 2020
Phil Burgess, NHRA National Dragster Editor
News

When the NHRA’s Return to Racing continues this weekend at the Lucas Oil NHRA Summernationals, Joe Morrison will complete his lifelong dream of racing a Top Fuel dragster in NHRA national event competition when he buckles into the Leverich Family dragster for his professional debut. 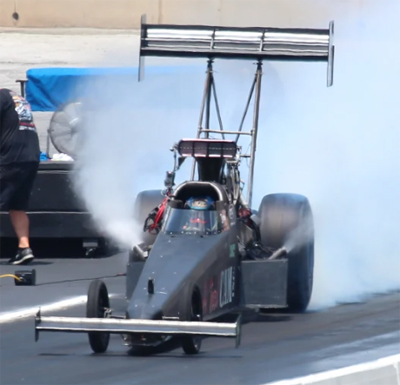 “I love this sport so much and have been going to the races since before I was born – my pregnant mother worked in the timing tower at Island Dragway [in New Jersey] and I want other people to know how great this sport is. I want to be good for the sport. I want to do everything I can to help grow the sport. Racing at Indy is a huge honor.”

Morrison, who has previous experience in Top Alcohol Dragster, Nostalgia Funny Car, AA/Fuel Altered, and Advanced ET, had been named the new driver of the Gary and Dan Leverich-run Leverich family entry last December and made his initial shakedown passes in the Michigan-based car in Florida in January and February, but his plan to complete his upgrade licensing on Monday after the Amalie Motor Oil NHRA Gatornationals in March were sidelined by the COVID-19 pandemic.

Maple Grove Raceway was hosting a combined Pro Mod and Super Chevy show, which made for a perfect spot for Morrison to make his two required full passes but it proved to be a crucible of patience, fortitude, and good fortune.

“We made two test runs on Thursday – one immediate tire smoke and one that went into smoke after the ‘shake zone’ – and were on the line for a third run until when heard a problem with a valve as were spinning the motor over,” he said. “Friday was a monsoon and it rained all day so we started looking at Saturday, but a lot of our regular crew guys couldn’t stay, so I started reaching out to all of my old friends in the Nostalgia Funny Car class for help. 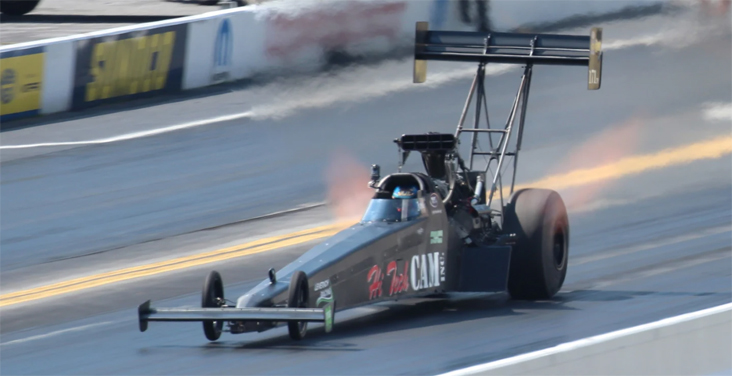 “Saturday was July 11 -– 7/11; now, I’m not a gambler but I know the significance of 7-11. It was also the birthday of one of the people helping us and the wedding anniversary of my PR guy, Tim Charlet, but there’s more: 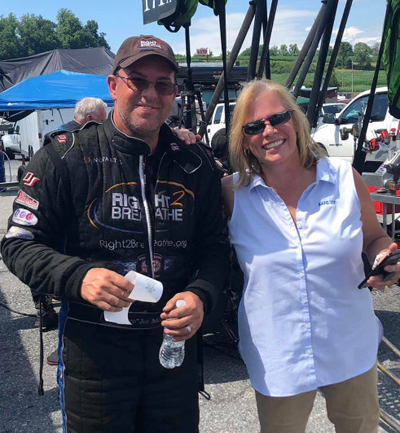 “One of my friends is George Ridenhour, whose crew chief is Bill Hodgson, whose wife is Pam Hardy – ‘Jungle Pam’ Hardy – so she came to hang out, too. As a Jersey kid who grew up and the races and idolized ‘Jungle Jim’ Liberman, that was so cool. ‘Jungle’s’ competition number was 117 -– more 7-11 -- so I went with 171 as a tribute to him. I didn’t want to pick 117 because there’s only one ‘Jungle Jim.’

“Anyway, we got out for our first run Saturday and sometime after the eighth-mile, it just quit. Turns out that the throttle cable broke, but the run was still quick enough to qualify as one of my full runs. When we got back to the pit area and tore the engine apart, we saw that the engine was hammering the #6 rod bearing and if it hadn’t shut off, we would have put holes in the block all over the place. Again, there’s that 7-11 luck.

“We swapped motors and went 4.03 on the last run, but even that one wasn’t easy. It broke a header downtrack and pushed me toward the centerline, but I caught it. It was great to finally get it done. I jumped in the car that night and drove to Indy at 6 a.m. the next day to personally hand in my license information and get entered. There are 20 cars entered, so we have to be quicker than at least four of them.

“I feel comfortable in the car,” he said. “I’ve only got 12 runs in the car, but I’ve had a lot thrown at me: I’ve experienced tire shake, tire smoke, a stuck throttle, a pedal job, a broken header, and a night run. I’m still adjusting to the speed -– anyone who tells you they can jump into a Top Fuel car and not be ‘behind’ the car is lying -– and I’m not going to try to go out there at my first run and try to be a hero.” 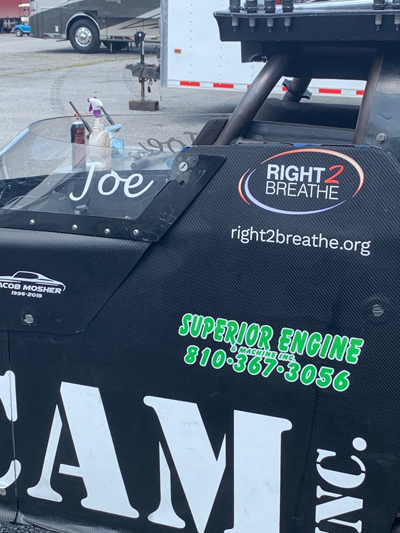 While he’s not trying to be a hero on the racetrack, Morrison has been making heroic efforts during the COVID-19 pandemic. His non-profit organization, Right2Breathe, which provides free lung screenings – which they also offered at the NHRA Four-Wide Nationals in Charlotte a few years ago – patient education and resources, and works to educate clinicians who treat patients, has been a great resource for those afflicted with lung ailments. Morrison’s father, who gifted him his love for the sport, died of lung-related ailments four years ago.

“Last fall, we started an online patient support group for patients who couldn’t get out because of their medical issues, offering them video conferences with pulmonologists that allowed them to get some education and support from the comfort of their living rooms. We had some good participation but once COVID hit, it really took off because people with lung issues like COPD are among those most at risk with COVID. We’ve also been doing a lot of one-on-one help behind the scenes.”

The Leverich team hopes to run three to four events later this season, targeting possible appearances in Reading, Gainesville, and Bristol, with the addition of either Brainerd or Atlanta.