Thursday night in Las Vegas during the final rounds of the weather-delayed JEGS SPORTSnationals, Jody Lang officially clinched the world championship in Stock Eliminator and Anthony Bertozzi locked up the title in Top Dragster presented by Vortech Superchargers. The championship is the first for Lang while Bertozzi was previously the Super Stock champ in 2002.

Lang wrapped up the title when five time champion Justin Lamb, his closest rival, lost to Jerry Stein in the quarterfinal round. Lang went on to win the event, the 30th of his career, when he defeated reigning Division 5 champ Scott Burton in the final round. Lang was driving his familiar ’80 Malibu station wagon, one of the slowest, yet most consistent cars in Stock Eliminator.

For Lang, of Puyallup, Wash., the title has a been a long time coming. Long regarded as one of NHRA’s best class racers, Lang now has 30 national event wins and a host of Top 10 finishes. He’s also has a history of near-misses with a pair of second place finishes. One of Lang’s most notable seasons came in 2005 when he reached a robust score of 672 points but came up well short against Peter Biondo’s record total of 792 points. Lang also finished 15 points behind Kevin Helms in the battle for the 2001 Stock title. 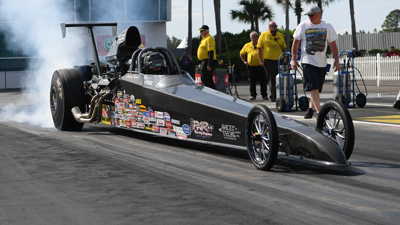 Bertozzi, a 24-time national event winner, was crowned the Top Dragster champion in a dramatic moment when Bradley Johnson lost to former champ Paul Nero in the final round. Johnson needed the win to overtake Bertozzi but came up shortin a close double-breakout race.

Bertozzi, of Ashland, Va., is regarded as one of sportsman drag racing’s most consistent winners with national event titles in Top Dragster, Super Stock, Stock, and Super Comp. He is also an accomplished big money bracket racer and the most successful driver in the history of the IHRA series.

In 2020, Bertozzi won the JEGS SPORTSnationals race in Columbus and also earned a runner-up finish at the Amalie Gatornationals in March. His score also includes a pair of final rounds at Luas Oil Series events. In addition to his Top Dragster championship, Bertozzi also finished No. 5 in Super Stock.

The following are the final results from the NHRA JEGS NHRA SPORTSnationals: