Robert “Bones” Balogh, Lee Beard, Don Enriquez. Roy Hill, Billy Meyer, and Larry Minor will be inducted into the International Drag Racing Hall of Fame in March in Gainesville, Fla. The Don Garlits Museum of Drag Racing, home of the International Drag Racing Hall of Fame, announced its Class of 2020 inductees as well as the recipients of the Founder’s Award, which will honor Don Prieto, and the Patricia Garlits Memorial Award, which will be presented to Etta Glidden.

Balogh was one of the most respected drivers and engine builders during the period of drag racing’s infamous “Gasser Wars” of the 1960s best remembers as the driver of “Big John” Mazmanian’s famed red 1941 Willys A/Gas class car that was first powered by Balogh’s supercharged small block Chevy, and later by a supercharged Chrysler Hemi, which proved to be nearly unbeatable with Balogh at the wheel. After the Mazmanian partnership dissolved, he teamed with Gary Dubach and Joe Pisano in 1966-67 and with Tim Woods of Stone, Cook and Woods fame to campaign a 1968 Shelby Mustang – the “Swindler A” car – on a national match race tour. By 1969, the Gas class was being supplanted by the new Funny Car class, and marked the end of Balogh’s illustrious 10-year racing career.

Beard has created an enviable record of accomplishments in the drag racing world as a crew chief, engine tuner and team manager. He has worked for some of the most prestigious race teams in the sport from the 1980s and into the second decade of the 21st Century and won the 1989 NHRA Top Fuel world championship with the late Gary Ormsby and, as team manager, the 1992 NHRA Funny Car world championship with Cruz Pedregon at Larry Minor Motorsports and the 2009 NHRA Top Fuel world championship with Tony Schumacher at Don Schumacher Racing. Across his career, Beard scored 55 NHRA National event wins with 12 different drivers, in the Top Fuel and Funny Car classes.

Enriquez’s racing career has been linked with his friend and fellow Hall of Famer Gene Adams in the late 1960s-early 1970s in what was collectively known as Jr. Fuel dragsters. The pair terrorized the class in Southern California, and later across the country. Enriquez raced with Adams for 33 years, moving on from the injected front-engined dragsters to nitro-fueled injected Funny Cars and later moved into the emerging nostalgia drag racing cars in the 1980s. Most recently, Enriquez has competed in the NHRA Heritage series at the wheel of Bob McKray’s C/Fuel dragster which has been a multi-season champion in the Jr. Fuel Eliminator for over two decades.

Hill was one of the stalwarts of the “Mountain Motor” Pro Stock class during its heyday on the IHRA circuit from the early 1970s into the 1990s. Hill grew up just down the road from Lee and Richard Petty in Level Cross, N.C., and became close friends with the NASCAR stars. He began his racing career in Super Stock class with a Dodge Dart using Petty Enterprises-built and tuned Chrysler power. When the Pro Stock class was born in the early 1970s, Hill started his Pro Stock career in a Dodge Dart, using a Petty Enterprises-prepared Chrysler Hemi and carrying the famed Petty Blue and Orange color scheme. While he never logged world championship as a driver, Hill recorded 28 IHRA national event victories and 31 runner-up finishes and won the IHRA World Championship with Tim Bell driving a Ford Probe in 1995. In 1989, Hill launched his Roy Hill School of Drag Racing out of his home base in Sophia, N.C., where has trained and tutored hundreds of students ranging from children learning the sport in Jr. Dragsters to aspiring professionals to fans who want to understand how to drive a drag racing vehicle.

At the tender age of 16, Meyer sought and got his Funny Car license and before long had won the most prestigious independent Funny Car race of the season, the 1972 “Manufacturers Funny Car Championship” at the famed Orange County International Raceway. Meyer went on to become one of drag racing’s most successful drivers, and with the exception of a six month period, was the engine tuner on each of his cars. While he never won a Winston World Championship in the NHRA, he finished second three times, and was third three times across his 15 years of competition. He competed in 112 NHRA National events, and reached the final round 22 times – a final round appearance record of 20%, and won 12 of those (a 55% winning percentage). He also won the IHRA Winston World Championship in 1980, and won the IHRA’s prestigious Spring Nationals at Bristol, Tenn. four times. Aside from his on-track racing legacy, Meyer will be best known and built the then cutting-edge Texas Motorplex in 1986 in the Dallas-area suburb of Ennis, Texas.

Minor has been deeply involved with drag racing, off-road racing and sand drag racing in one form or another since the late 1950s. His drag racing efforts got underway in 1978, teaming with Hall of Fame driver, Gary Beck in a Top Fuel dragster – which produced an overwhelming demonstration of performance in 1983, setting an amazing 17 of 18 quickest runs in the sport’s history to that point, and won the NHRA’s Top Fuel World Championship. Throughout the decade of the ’80s and ‘90s, not only did Minor’s drag racing operations attract top-level driving talent. He also drew top-level team personnel to the teams. Ed McCulloch delivered an IHRA World Championship in 1988 and a prestigious U.S. Nationals win in 1990 in the Miller Funny Car, and Cruz Pedregon would notch win the NHRA Winston World Championship in Funny Car in 1992, and won the U.S. Nationals three times in four years (1992, 1993 and 1995). Though Minor left active participation in drag racing behind, he continued to participate in the sand drags – as a racer and later as a chassis and vehicle builder. 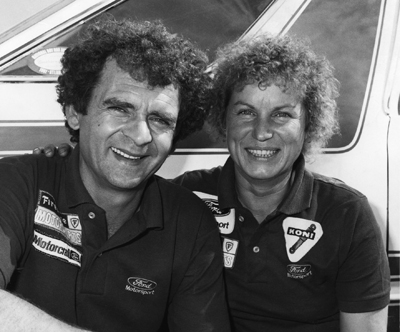 The Patricia Garlits Memorial Award is given out annually to a woman who has “contributed to the sport of drag racing through their professional activities- at the track-and/or their personal activities-off the track-which promotes the sport in a positive manner or to the success of the sport.” Glidden stood beside her legendary husband, Pro Stock superstar and Hall of Fame driver Bob Glidden, throughout his checkered career of 85 NHRA class wins and 10 NHRA World Championships. Etta was a fixture at the starting line and in the pits as the Glidden family raced their Ford Pintos, Fairlanes, Mustangs, and Thunderbirds (as well as one year with a Plymouth Arrow) against some of the very toughest competitors in Pro Stock class history. Etta served as crew chief – keeping the team organized and was there to assist in any way possible, working on the car with her sons with Bob’s direction, yet being a mother at the track and at home.

Prieto was never one to turn a blind eye to what he considered to be a problem (or worse) found himself working in the automotive enthusiast media, while also getting involved with Top Fuel cars. As a journalist, Prieto was nicknamed “The Louisiana Lip” for prodding at some of the sacred cows of drag racing and the emerging performance automotive aftermarket. The nickname changed to “The Wavemaker”, and his very pointed critiques were both lauded and hated, but their points were most often on target. Prieto was a fixture at the drag strips writing and editorializing for first Drag Digest and then Drag Racing magazines. This was followed by a stint at Petersen Publishing Book Division, editing drag racing-related titles, plus Hot Rod Industry News, a trade publication for the performance parts aftermarket.  Over the years, Prieto’s skills at extemporaneous speaking and the ability to present his thoughts on paper led him to public relations positions with the automotive trade associations.

The induction dinner and ceremony will take place on Thursday, March 12, in Gainesville, Fla. at the Wyndham Garden Hotel Gainesville. Tickets are priced at $110 each, and available by calling the Museum toll-free at 877-271-3278. Corporate-sponsored tables are also available.