The Lucas Oil NHRA Summernationals kicked off on Friday with a test session open to competitors in Pro Mod, Factory Stock, and Top Fuel Harley as well as nitro racers who did not compete in last weekend’s E3 Spark Plugs NHRA Nationals. The ability to test ahead of a national event was welcomed by everyone, but especially Pro Mod and Factory Stock drivers, who have yet to officially begin their 2020 seasons. Both classes were scheduled to begin in Gainesville in March but were delayed due to the COVID-19 pandemic.

With the limits on nitro testing, Chad Green and Bob Tasca III were the only two Funny Car drivers to make runs. Green, who was injured during a crash at last year’s U.S. Nationals, returned in full force with both a nitro Funny Car and his more familiar Bond Coat Camaro Pro Mod entry. Making his debut in the same Mustang that Daniel Wilkerson drove last week, Green made a clean half-track pass.

In an effort to ensure parity with the rest of the nitro drivers who were not eligible to run on Friday, Green didn’t receive and elapsed time and his crew, led by Tim and Daniel Wilkerson, weren’t permitted to download the data from their run.

“I can’t say I agree with that decision, but I can get what I need by looking at the video,” said Tim Wilkerson. “Mostly, I wanted to see how long his routine took, and where he shut the car off. I wanted to see him run to about 700-feet but I’m sure he shut it off before that. The data would be nice, but I can look at the motor and check clutch wear and that will give me some information. I guess it’s a badge of honor if they think I shouldn’t have extra runs.”

Tasca missed last weekend’s Indy Nationals while recovering from a bout with CODID-19 in his place, Jonnie Lindberg drove to a quarterfinal finish. Tasca was cleared to drive earlier this week and returned to the seat of his Motorcraft Quicklane Mustang. He made what appeared to be an impressive full pass during his lone checkout run on Friday.

Racers in the E3 Spark Plugs Pro Mod class got their share of runs in on Friday with some competitors making as many as 3-4 hits on the Lucas Oil Raceway quarter-mile. The combination of low 90-degree temperatures and drivers that have been out of the cockpit for 3-4 months meant that full runs were at a premium but that didn’t stop Jason Scruggs from throwing down a competitive 5.79 in his supercharged Camaro while Brandon Snider also turned in a solid effort with a 5.81 in his AAP Corvette. Rick Hord, debuting the new ProCharger combination on his Maximum Effort Corvette, made several runs including a best of 5.91 while Brandon Pesz also in the mix with a 5.92 pass.

Pro Mod testing also provided a few dramatic moments. Former Top Sportsman national champion Jeffrey Barker, driving the nitrous assisted Bahrain 1 Camaro, got loose on the burnout and spun out, missing the Christmas Tree by inches. Barker did take out the 60-foot timing block and a starting line video camera, but damage to his car was minimal and he returned later in the day to make a couple more attempts.

Mike Castellana and crew chief Frank Manzo debuted their new Jerry Bickel-built AAP Camaro and made three runs but did not go to the finish line under power.

Also of note, is the appearance of Bo Butner, who raced in Pro Stock last weekend, and returned to Indy this week to make his Pro Mod debut behind the wheel of Rickie Smith’s nitrous-boosted Strutmasters.com Camaro. Butner took advantage of the test to familiarize himself with a car that is nearly a half-second quicker, and 40-mph faster than his Pro Stock entry.

“This car will definitely get your attention,” Butner said. “I’m just trying to take it step-by-step and learn a little bit more each time. It’s got a mind of its own, but it really is a lot of fun to drive.”

The combination of hot weather and months of inactivity provided an interesting backdrop to the start of the SAM Tech.edu Factory Stock Showdown. The plot thickens with the introduction of a new qualifying format that provides just two qualifying runs ahead of Sunday’s final eliminations. With 25 Factory Stock entries vying for just 16 available spots, a single aborted run can have devastating consequences. 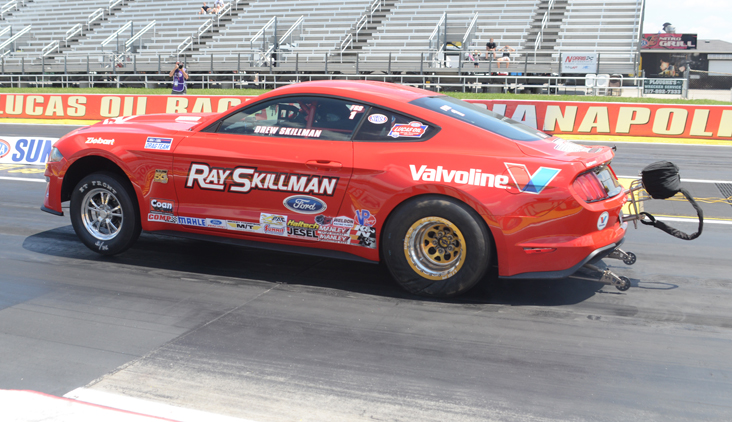 Drew Skillman, the reigning Factory Stock champ, got off to an ominous start during Friday’s test session. Skillman had to return to the pits before his first attempt when the power windows on his Cobra Jet Mustang would not roll up. Skillman’s crew was able to fix the problem quickly and he returned with back-to-back runs of 7.96 and 7.95, among the quickest of the day.

“We never had a problem with the windows being stuck when I ran Pro Stock,” Skillman joked. “It wasn’t really a big deal to be honest. We got it fixed and made a couple of nice runs, so I think we’re set up pretty well for qualifying. It got to run a race in Ohio a few weeks ago so I don’t think we’re rusty. It [qualifying] is not going to be easy, but I’m glad we got a couple of runs in today.”

The Lucas Oil NHRA Summernationals kicks off tomorrow with Jr. Dragster tune trials at 8:15 followed by Factory Stock qualifying at 11 a.m. Nitro qualifying rounds are scheduled for 12:15 p.m. and 4 p.m.