On the sidelines for four months or more, NHRA Mello Yello Series pro racers are both grateful and excited to be back at the track, doing what they love to do.
10 Jul 2020
Kevin McKenna, NHRA National Dragster Senior Editor
News

“I can’t even begin to tell you how much I’ve missed this,” said three-time Pro Stock Motorcycle champion Angelle Sampey as she climbed off her Screamin’ Eagle Harley-Davidson following a time trial run on Friday at Lucas Oil Raceway Indianapolis. 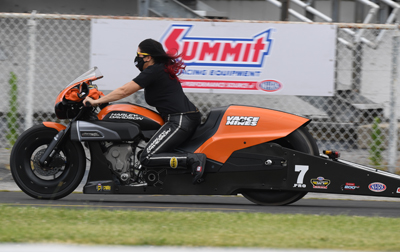 Sampey’s thoughts were echoed by nearly all of the 75 or so NHRA pro drivers who have returned to action this weekend following a lengthy absence due to the COVID-19 pandemic. The last time the NHRA Mello Yello Series held an event was in Phoenix on February 22, that was 138 days ago. For Sampey, the wait has been even longer since the Pro Stock Motorcycle class has not raced since the Auto Club NHRA Finals in Pomona last November.

“I have a brand new bike this year and I made a few runs on it in Orlando right before we were supposed to go to Gainesville and then this [pandemic] happened,” said Savoie. “This bike was built just for me and I’m so comfortable on it. I’ve been anxious to get back out there and keep learining and see what I can do this year. I’m lucky in that I’ve been out here a long time and I’ve been fortunate to accomplish a lot but that also means that I probably don’t have as much time left as some of these people do. Right now, I still feel healthy and I feel like I can go out there and compete and that’s what I want to do. Of all the years I’ve been racing, I think this is the most excited I’ve ever felt to get back to the racetrack.”

In addition to his normal duties as an engine builder at KB Racing, Pro Stock’s Jason Line spent the unexpected down time working on a variety of projects on the homefront and also found some time to race his prized Buick Stock Eliminator car. Line announced earlier this season that 2020 would be his final year as a driver in the Pro Stock class so he’s learned to value however many opportunities he has left.

“Coming over here to Indy, Rob [Downing, crew chief] told me that I needed to really think about races like this one, and make sure I have the right mindset and I know he’s right,” said Line. “I mean, I’m firm in my commitment; this will be my last year in Pro Stock and I’m perfectly fine with that, but I want to make sure I enjoy the rest of the ride.” 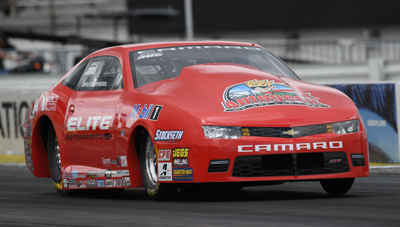 Most of the time at NHRA events, Bruno Massel is a part of the NHRA Fox television crew and in his “day job” he’s the host of programs such as Garage Squad and Truck TV so he’s a busy guy who doesn’t get to race as often as he’d like to. This weekend, Massel will have the opportunity to jump back into a Pro Stock car for the first time in five years so his excitement level is off the charts.

“When the Elite guys call and ask if you want to drive one of their Pro Stock cars, you don’t hang up on them,” said Massel. “We talked about this opportunity before the season began and I’ve obviously been looking forward to it. I still enjoy racing my Comp car and I plan on doing a bit of that this summer, but we’re still looking at doing three or four races in Pro Stock including this one so yeah, you could say I’m happy to be back.”

Clay Millican is known for his catch phrase, “Stomp on that loud pedal” which is something he hasn’t had had an opportunity to do since Phoenix. Like many pro racers, Millican has passed the time taking care of projects that might otherwise have been left undone during a typical busy season.

“We’re doing a remodel on my parents house getting ready to sell it,” said Millican. “I’m also building the Dodge truck that [late son Dalton] owned. That’s been a fun project. I also spend a lot of time listening to a variety of podcasts, but what I really missed was being out here with my team and the rest of NHRA.”

Millican also acknowledges that the changes made to the competition format, specifically two-day races with just two qualifying sessions, could provide a huge boost to his program and to other independent and single-car teams.

“When we used to run IHRA with me and [crew chief Mike] Kloeber, we only had three runs and those were eight car fields so this isn’t much different,” said Millican. You still need to make every run count. That’s something we’ve always tried to do here because we don’t have the budget to throw away runs. It’s a little scary to try and do this on two runs; I’m sure it will bite some teams; possibly even this one but we’ve all go the same chance. I’m just happy to be back out here.”