Zimmerman, who grew up hot rodding cars in Big Springs, Neb., in the late 1940s, where street racing was the means of expressing their need for speed. But in 1954 Zimmerman and a group of friends were able to convince the local county commissioners to hold a drag race on the straightaway of the local oval track.

Although he was still a racer at heart, he later began working in tech inspection for the Denver Timing Association and volunteered to help with tech at NHRA’s first National Championship Drags in Great Bend, Kan., in 1955. Word of Zimmerman’s knowledge and skill soon reached Parks and Zimmerman was appointed a regional adviser in 1957 and in 1959, he was named Division 5 Director, joining Ed Eaton (Northwest Division), Ernie Schorb (Southeast), Bob Daniels (North Central), Dale Ham (South Central Division), Jack Merrill, (Northwest), and Ed Davis (Southwest) as the original division directors charged by Parks with growing the sport in their region of the country. By 1965, Zimmerman also was the head of NHRA’s Safety Safari as well as in charge of pit control and time slips. 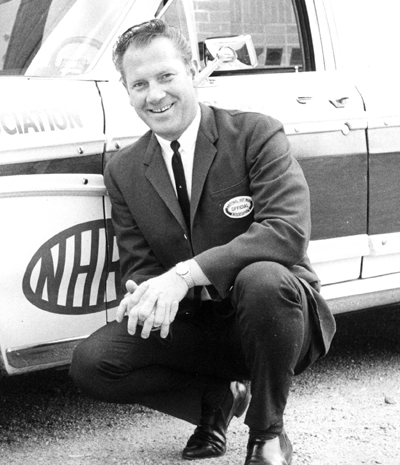 During his time as Division 5 Director, which ended with his retirement in 1994, he oversaw the building of many, many dragstrips, including three of the region’s most famous.

In a 1994 interview with National Dragster, Zimmerman said, “Among the things I look back on most fondly were helping the Bandimeres build their facility in Denver, the construction of Brainerd Int’l Raceway in Minnesota, and working with the engineers and officials in the creation of Heartland Park Topeka, a track that many people said would never be built.

“Now all of those facilities have national events, and that’s something we’re real proud of in Division 5. We’ve always had a lot of square miles and jackrabbits in our area, but because the states are much less populous than in other parts of the country, nobody ever expected we’d have one national event, let alone three.” 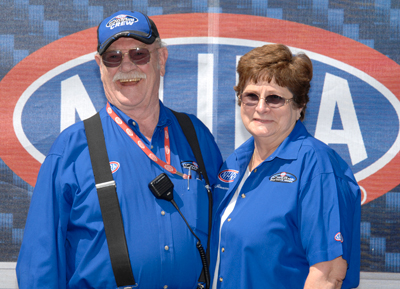 By his side throughout his years with NHRA was his wife, Polly, whom he married in 1957 and who worked tirelessly with him on divisional projects and also at NHRA national events. She survives him, along with their four daughters, Tammy, Daphne, Dodie, and Zanette.

NHRA President Glen Cromwell, himself a former division director, lauded Zimmerman for his decades of service to the NHRA.

“Darrell Zimmerman will always be remembered as one of the great division directors in NHRA history,” he said. “When Wally was looking for help building his dream, Darrell Zimmerman was part of making that dream come true. He was the model division director, he and Polly as a team; it was a perfect fit. They were instrumental in the growth of the sport in the Division 5 area. The sport owes them both a tremendous debt of gratitude for what they’ve brought to NHRA and the sport.”

Rob Park, the current Division 5 Director and the regional leader since January 1997, added, “Darrell Zimmerman was the foundation for all things good about the NHRA’s West Central Division.  He dedicated his life by walking side by side with Wally Parks, making tremendous sacrifices in the early years for the growth of the NHRA, but loved every second.  He was the perfect balance of professionalism, knowledge, compassion, and strength. His involvement was paramount, being one of the pioneering leaders of NHRA.  Zim’s passion for NHRA never left as he remained involved with his High and Mighty Division until this day.  Shuck and Jive, my friend."