It takes a lot to impress someone like Bob Tasca III, who regularly makes 320-mph runs in his Motorcraft Quicklane Ford Mustang nitro Funny Car, but the Cobra Jet 1400 Mustang did just that on Thursday at the Denso Spark Plugs NHRA U.S. Nationals. Tasca got a chance to drive Ford’s newest electric-powered creation, and he came away awestruck not only by the car’s performance, but also by the advanced technology that allows the car to make more than 1,500 horsepower without burning a drop of fuel. During a Friday exhibition run, Tasca drove the car to an 8.591 second run at 165.66 mph.

“This car is amazing,” said Tasca, currently ranked No. 5 in the Mello Yello Funny Car standings. “It was like being in a sling-shot. Absolutely incredible how hard it accelerated, so smooth with the coolest sound ever. All Ford. All electric. This was a very special run that I made. My grandfather [Bob Tasca Sr.] would be proud. He invented the Cobra Jet and he was always so excited about what would be next in engineering and performance. He wouldn’t believe how awesome this car is. The Cobra Jet legend lives on.” 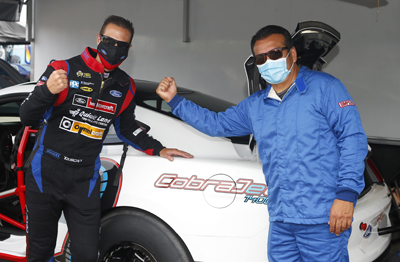 From a distance, the Ford Cobra Jet 1400 looks much like any of the other Cobra Jet Mustang race cars that are currently active in NHRA Super Stock and Stock Eliminator racing but looks can be deceiving. Upon closer inspection, the CJ1400 is a technological marvel that pushes the boundaries of electric car performance. Developed by Ford Performance in parallel to the recently unveiled Mustang Mach-E 1400 prototype, both cars were built to demonstrate Ford’s technological capabilities and innovation skillset in EV technologies.

“This is our first foray into electric the electric drag racing world and we picked 1,400 horsepower as a target, but we’ve already exceeded that,” said Brian Novak, Ford Performance off-road racing supervisor. “Ford has designated $11.5 billion into future development of electric vehicles and we see drag racing as a perfect platform because you can push it to the limit.”

As noted, the Cobra Jet 1400 prototype has exceeded 1,500 rear-wheel horsepower and has already achieved performance numbers of 8.27-seconds at more than 168-mph during a private test session. That’s equal to the combined output of more than three 2021 Mustang GT V8 engines. Tasca made his first run in the car on Thursday at Lucas Oil Raceway at Indianapolis, and took a cautious approach, shutting off early and coasting to an 11.897-second elapsed time. He returned later to post his 8.59-second run in a side-by-side race against his friend, two-time NHRA Funny Car champion and current NHRA/Fox Sports television commentator Tony Pedregon, who is making his first runs in a petrol-fueled Cobra Jet.

“Since revealing the car, we’ve continued to fine-tune it and now know we're just scratching the surface of what we may be able to achieve with this much electric horsepower in a drag racing setting,” said Mark Rushbrook, global director, Ford Performance Motorsports. 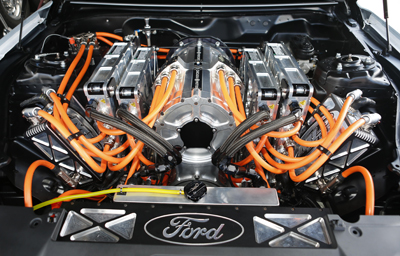 Ford Performance collaborated with Cascadia Motion to power the Cobra Jet 1400. The heart of the powertrain is four PN-250-DZR inverters coupled to a pair of DS-250-115s, giving four motors total and spinning at up to 10,000 revolutions per minute. The motor-inverter packages run at 800 volts and up to 700 amps, with maximum output of 350kW per motor. Managing that power is a challenge, but Ford Performance worked with AEM-EV to develop a control system that features a control algorithm unique to the Cobra Jet 1400.

The sheer amount of power has also required a different approach with chassis tuning strategies, which MLe, Ford’s build and integration collaborator for the project, has delivered with input from Ford Performance’s longtime Cobra Jet build collaborators at Watson.

“It's been a great but challenging project for all of us at Ford Performance,” said Rushbrook. “The opportunities to learn with the Mustang Cobra Jet 1400, as well as the Mustang Mach-E 1400 we recently introduced, gives us great insight into what may be possible in high-performance all-electric vehicles for Ford going forward. We are very interested in continuing to work with NHRA to determine how electrification can be part of the sport and to show off the Cobra Jet 1400 at max power in due course as regulations develop.”

“Drag racing has always been where Detroit proves its most advanced powertrains,” added Brad Gerber, V.P. sales and chief development officer, NHRA. “The U.S. Nationals is the sport’s quintessential stage for reaching enthusiasts wanting a glimpse at the future technology of performance vehicles. Our fans are fascinated by horsepower in all forms and the electrification.”