This partnership marks the official launch of the True Disruption clothing, marketed as a clothing brand for innovators, entrepreneurs, trailblazers, trendsetters, and record breakers is making. 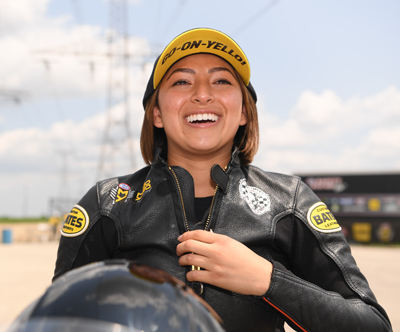 Salinas, daughter of Top Fuel championship contender Mike Salinas, represents Scrappers Racing’s next generation of NHRA drag racers. Her motorcycle will showcase a unique collaborative design featuring the event slogan: Scrappers Disrupt.  As an emerging brand, True Disruption has partnered with Team Scrappers to showcase what the brand is all about.

“I am very glad to have this opportunity to represent a company that embodies my beliefs of pushing boundaries and going against the grain,” Salinas said.

The Dodge NHRA Nationals is the second to last race in the 2019 NHRA season. As Salinas enters the final stretch of her rookie season, she is eager to represent True Disruption at such a large event. With the season-ending, there will be excitement in the countdown to the championship and very competitive racing all around.

Aaron Lewis, co-founder and CEO of True Disruption and its parent company Sphere Brakes, LLC hopes the launch of this clothing line inspires more entrepreneurs and pioneers to continue creating and innovating new technologies. Lewis is currently developing new brake technology that will be safer and less expensive to maintain. This disruption of the automotive industry has his company grinding nonstop to make these brakes available to consumers, military, and, someday, racers.