As a four-time Pro Fuel Champion, Thornley is familiar with the term “Beating the Odds” as throughout her life she’s faced many challenges in the male-dominated sport. However, Thornley understands her new goal of racing Top Fuel Harley is very lofty. Pro Fuel and Top Fuel are two different animals in both speed and in operational aspects.

“After nearly eight years of riding a nitro-powered motorcycle, nothing can prepare you for a Top Fuel Harley except seat time,” she said. “I have nothing but respect for these machines and those who ride them. My goal is to be a competitive rider and I know that will take tenacity, strength, and perseverance of my faith for it to happen.”

Thornley selected Vreeland to assist her effort. The Straightline Strategy Group, which represents Thornley within a strategic marketing alliance, is proud to announce that Thornley and Vreeland are set to participate at all 2020 NHRA events in the Top Fuel Harley class. 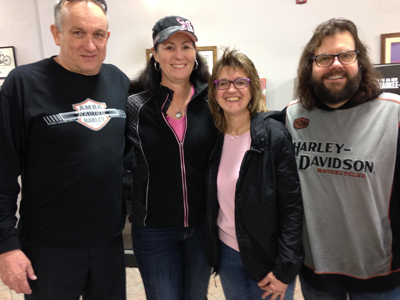 The husband and wife duos of Janette and crew chief Buddy and Rich and Patti Vreeland are excited about the 2020 season. The group has had a 20-year relationship both on and off the track. The opportunity for Rich to serve as mentor to Janette while she obtains her seat time during test sessions is priceless. Rich will kick off the season as the team pilot of the Top Fuel Harley.

From a racing standpoint, Vreeland’s ability to tune and ride are a strong 1-2 punch. As a co-owner of Vreeland’s Harley-Davidson in Bloomsburg, Pa., for the past 29 years, Rich is highly engaged in community activities such as Starting Line Ministries and guides people of all ages.

The team is scheduled to debut ITS Top Fuel Harley this year at the 2019 Man Cup World Finals held at South Georgia Motorsports Park outside Valdosta, Ga., Nov 21-24.