Although Simpson was known throughout the motorsports world for his dedication to the safety of its participants, drag racing was a huge part of his life and of his resumé. He pioneered the use of parachutes as supplemental braking devices on dragstrips, initially converting military surplus cargo parachutes before creating his own design and marketing it under the Simpson Drag Chutes line. He also was a leader in fire-retardant driver suits that saved many a life, especially in the sport’s earliest days. 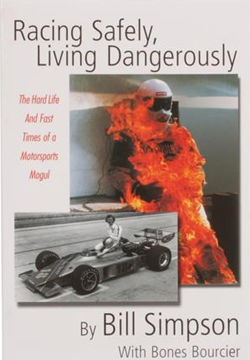 A chance meeting with astronaut Pete Conrad in 1967 introduced him to the fire-retardant material Nomex being used by NASA and Simpson quickly saw its value for motorsports, where early drivers would face the danger of fire with nothing more than a leather jacket or a nylon suit soaked in a fire retardant chemical. Simpson was so sure of the protection offered by his suits that the often allowed himself to set be set alight in publicity photos to prove their worth. It was the main image on the cover of his autobiography, Racing Safely, Living Dangerously.

Simpson came by his love of motorsports as a driver, racing everything from sports cars to door cars and dragsters on the dragstrip and even competed in the Indy 500. His safety line expanded to encompass all forms of driver protection, including safety harnesses, helmets, gloves, and shoes.

Simpson sold his company in 2001 and two years later founded Impact! Racing, which also sold safety equipment. He sold that company in 2010.