Some of the best street car racers on the planet will come together at the 65th annual Chevrolet Performance U.S. Nationals to compete for the chance to reset the Street Car E.T. record in the NHRA Street Car Showdown.
08 Aug 2019
Posted by NHRA.com staff
News

Some of the best street car racers on the planet will come together at the 65th annual Chevrolet Performance U.S. Nationals to compete for the chance to reset the Street Car E.T. record in the NHRA Street Car Showdown.

On Aug. 31 and Sept.1, fans at the Chevrolet Performance U.S. Nationals will get to watch Tom Bailey, Joe Barry, Bryant Goldstone and Dave Schroeder take to the track at the World’s Biggest Drag Race to see if they can tune up their impressive street machines precisely enough to knock a few digits off of the current record, 5.85 seconds. All four of the drivers and cars participating have completed Hot Rod Drag Week, a competition wherein drivers race and road-trip their cars on a course of five dragstrips in five days. These cars are driven –- not trailered –- to each dragstrip where they run for quickest E.T. at each stop.

Bailey will be running his 1969 Camaro, which won Hot Rod Drag Week in 2015. His lightweight and streamlined machine has been a formidable opponent since it first hit the track, but for Bailey, this event is more about racing at one of the most iconic events in drag racing.

“When the NHRA calls you and asks if you would be willing to come to the U.S. Nationals and make some exhibition runs, what do you say?” asked Bailey. “As a kid, watching the U.S. Nationals was the equivalent of going to the moon and probably just as likely. Fast forward a few years and suddenly they call. It’s like the president calling and asking you to take the space shuttle for a spin!” 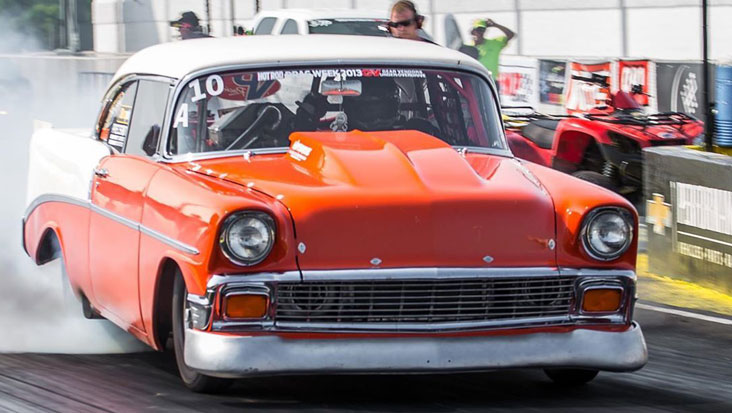 Barry’s 1956 Chevy, affectionately named “Creamsickle” for its peaches-n-cream paint scheme, maintains its original body, making it one of the heavier cars in the NHRA Street Car Showdown, but Barry is confident that he will hold his own and that the fans will enjoy seeing his pristine automobile up close.

“This is something we never thought we’d have the opportunity to do – participate in an event like the U.S. Nationals in these types of cars, so it’s a pretty big deal for us,” said Barry. “We’re an underdog in some ways, we still have the original car, all steel, versus some of the other cars. But we know we’ll be a fan favorite for sure.”

Goldstone will make his way down the track in a 1973 AMC Javelin powered by a twin-turbocharged, 572-cid big-block Chevy engine. He’s owned this competitive machine for over 30 years, competing in various arenas around the country including his home state of Indiana.

“I’m very excited to do this because we’re Indiana people. This is the biggest race of the year and we will be running in front of a lot of people we know,” said Goldstone. “I’ve been to the track before but never competed at the U.S. Nationals so it’s going to be nice to showcase what we can do.”

Schroeder rounds out the lineup with his bright blue 1966 Corvette, the only nitrous-huffing machine in the group and the winner of Drag Week in 2017.

“We are excited to be invited to participate in this,” said Schroeder. “I think we’re probably the only nitrous entry, but we are ready to give the turbo cars a run for their money.”

This elite group of street car racers will go on from the U.S Nationals to compete in Hot Rod Drag Week which kicks off September 8 at Virginia Motorsports Park in North Dinwiddie, Va.

Tickets for the Chevrolet Performance U.S. Nationals can be purchased by calling the NHRA Ticket Sales Center at (800) 884-NHRA (6472), or online at www.NHRA.com/tickets. Kids 12 and under are free in general admission areas with a paid adult. To honor the Salute to First Responders, military and first responders can save 20 percent on general admission tickets at the gate.