The NGK Spark Plugs NHRA Four-Wide Nationals at zMAX Dragway in North Carolina April 26-28 will offer four-wide competition in five different classes plus, for the first time, four-wide action under the lights in a pyro-filled Friday night.
15 Apr 2019
Posted by NHRA.com staff
News

The NHRA Mello Yello Drag Racing Series returns to the four-wide format with an action-packed and variety-spiced weekend when the NGK Spark Plugs NHRA Four-Wide Nationals revs up at zMAX Dragway in North Carolina April 26-28. The sensory overload of nitro-fueled excitement and the brightness of dragsters’ header flames will illuminate zMAX with an all-new Night of Fire on Friday, April 26. For the first time, the NHRA’s original four-lane drag strip will light the Tree and the night sky with qualifying beginning at 4:30 p.m. and concluding under the stars.

In addition to the thrill of seeing more than 40,000 horsepower launch as one from the zMAX starting line in the Top Fuel and Funny Car classes, fans will also see four-wide action in the Pro Stock Motorcycle, E3 Spark Plugs Pro Mod Series, and the exciting Mountain Motor Pro Stock class.

The popular SAMTech.edu NHRA Factory Stock Showdown also returns to action for its second event of the season featuring some of the wildest and closest racing on the tour.

With a record-breaking five different winners to kick off the season, racing in the Top Fuel class has never been tighter and fans can have a ringside seat for the next chapter at zMAX. In Funny Car, the sport’s winningest driver, John Force, will again set his sights on milestone career win No. 150, but he’ll have to get past his teammate, Houston winner Robert Hight, who’s beaten him an unprecedented four straight times.

Side-by-side-by-side-by-side 200-mph Pro Stock Motorcycles will also thrill the crowd as will the wild diversity of the Pro Mod class in its only four-wide outing of the season. The 6.2-second, 230-mph Mountain Motor Pro Stockers, 800-plus cubic inches under their retro throwback hood scoops, will also delight the fans by going four-wide. 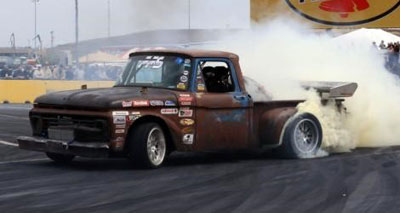 In addition to ontrack attractions, the East10Drift group will put on smoke-billowing drift shows and offer hair-raising ride-alongs in a special pit-area display

Gates are slated to open at 12 p.m., allowing fans to enjoy unprecedented access to their favorite drivers, cars and teams in the sprawling midway before the candle is lit on the Night of Fire.