McIntire, a 35-year-old second-generation Funny Car racer from Chesterfield, Ohio, has completed on the Nostalgia Funny Car circuit since 2014 but made the leap to the “big show” after purchasing the ex-Paul Lee/Kalitta Motorsports Toyota, now repainted orange and branded with the family's familiar McAttack moniker.

After making initial test passes on a local Ohio track, the team headed to Indy, with crew chief Aaron Brooks and the watchful eyes of Bobby and Dom Lagana, where they made two full passes of 4.60 and 4.34 to complete the licensing runs. Dom Lagana and Richie Crampton both signed his licensing papers. 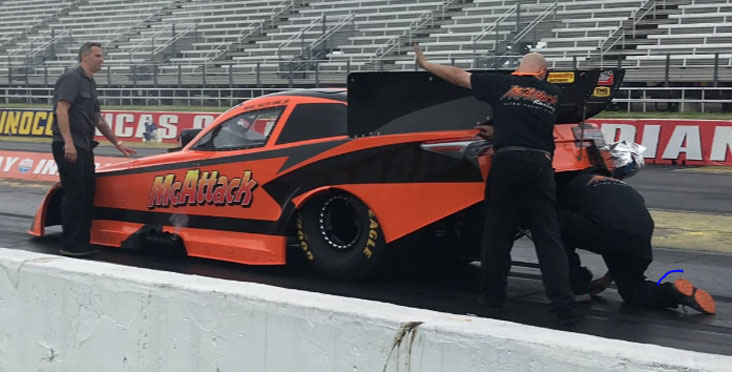 "We made a couple of good laps," he said. "That 4.34 I could have legged out further but everything is still new, so I clicked it just to make sure everything looked good. It felt good, man, real good.

“There’s no comparison between this car and my nostalgia car. It’s so violent. There’s nothing that can get you ready to hit the gas in one of these ‘big show’ cars.”

Summit Motorsports Park less than an hour from the team’s base, and where he earned his license in the nostalgia car, so it’s a familiar venue for his debut.

“Norwalk is where we do all of our testing, so it’s our hometrack,” he added. “I’m comfortable there and hopefully that will help us qualify at our first race.”

In addition to the Norwalk event, the team also plans to compete in Reading, St. Louis, and Charlotte.