Before we get started, how about a bit of drag racing trivia; Long before terms like “call out” or “locked-in” became part of the everyday drag racing vocabulary, there were the gasser wars of the 1960s and 70s and when it came to bitter racing rivalries, this was ground zero. The names that have withstood the test of time – “Big John” Mazmanian, Stone, Woods, & Cook, “Ohio George” Montgomery, and K.S. Pittman, earned their reputations largely by taking on all comers in match races across the country. More often than not, those matches included a bit of sometimes not-so-good-natured trash talking. Today, the gasser battles of yesteryear appear to have come full circle as Roadkill’s Mike Finnegan and Jarrad Scott went to work on each other ahead of their “Gass-O-Ween”, their scheduled best-of-three match race held during this weekend’s Dodge NHRA Nationals presented by Pennzoil in Las Vegas. 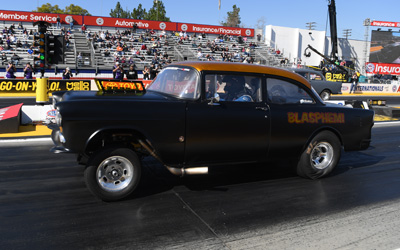 “I’m ready for a little Hemi on Hemi violence,” Finnegan said. “I’m doing this because I want to race my car, but I also think that Jarrad has gotten a little cocky. I like him a lot; we are friends but he thinks he has the better car and can drive better than I can and neither one of those things are true and I’m going to prove it this weekend in Las Vegas in front of all those NHRA fans.”

Finnegan should well-known to most NHRA fans after taking his famed “Blasphemi” Hemi-powered ’55 Chevy, up against the similar ’55 of Hoonigan’s Jon Chase at the season-opening Winternationals last February. Finnegan ran roughshod over Chase during the event, largely because Chase didn’t have adequate time to prepare for the match. Finnegan knows this time things are likely to be much different when he takes on Scott’s  ’62 Ford Ranchero, a unique entry that also features a supercharged Hemi engine and a manual 5-speed transmission.

“Last month at Drag Week, he [Scott] predicted that he’d be at his hotel having a steak dinner while I was by the side of the road fixing my car. It’s true that I had problems and had to do a lot of work on my car, the fact is that I crushed him on Drag Week. The record going in for our class was 8.95 and I ran 8.52. Think that says it all right there.”

During Hot Rod Magazine’s Drag Week event, held in mid-September, Finnegan defeated Scott to win the overall title in the hotly contested A/Gas class. Drag Week features the country’s fastest street legal cars in a weeklong competition that includes five days of dragstrip competition and nearly 1,000 miles of highway driving. Since each car must be driven from track to track, it takes a preparation, dedication, and oftentimes a bit of good fortune just to finish the grueling event, and to win an individual class title often requires superhuman effort. Finnegan knows that as well as anyone. He overcame transmission troubles to win the title with an 8.906-second average for the week. Scott finished second with a very respectable 9.044-second average for the week and both drivers averaged more than 150-mph for each of the five days.

Scott does not feel that his Drag Week results are a proper indicator of his potential when he takes his vintage Ranchero up against Finnegand’s classic shoe box Chevy.

“Am I ready for Mike, hell yeah I am,” said Scott. “He forgets that I won Drag Week two years in a row before he showed up. Mike came in and beat me by .14-seconds over five days, that’s not much at all. Call me crazy for thinking this way, but I think I have this in the bag. I tend to run my car on the conservative side because they are hard on parts if you’re not careful. We both have troubles with our transmissions. First gear just doesn’t want to live but my plan is to take all his boasting on social media and throw it right back at him. I want to knock him down a peg or two.”

Scott’s best pass to date is an 8.70 which is well short of Finnegan’s 8.52, but as noted, he feels the potential is there to run much quicker, especially on the quick track surface at The Strip at Las Vegas Motor Speedway.

“Mike did run 8.52 but he did it one time,” Scott noted. “The rest of Drag Week, he was in the 8.8s and 9.0s just like I was. If I put my car into beast mode I can go 8.5s just like he can and I might just have to do that. I tested three days ago and broke a transmission but we’ve got that fixed and I’m ready to go. I’m just going to twist his tail a little harder and everyone in Las Vegas is going to get to see it.”

To purchase general admission or reserved seats, call 800-644-4444. Tickets also are available online at www.lvms.com/tickets/nhra/. Kids 12 and under are free in general admission areas with a paid adult. To honor the Salute to First Responders, military and first responders can save 20 percent on general admission tickets at the gate.