For the second time in four years, Coca-Cola’s citrus-flavored soft drink brand Mello Yello will be featured on the DHL-sponsored Toyota Camry Funny Car, to be driven by the reigning NHRA Funny Car champion at the most prestigious drag race in the country, this year by J.R. Todd..
30 Aug 2019
Posted by NHRA.com staff
News

For the second time in four years, Coca-Cola’s citrus-flavored soft drink brand Mello Yello will be featured on the DHL-sponsored Toyota Camry Funny Car, to be driven by the reigning NHRA Funny Car champion at the most prestigious drag race in the country.

In 2016, the tradition started at the NHRA U.S. Nationals with DHL-backed Funny Car champion Del Worsham celebrating the 50th anniversary of the Funny Car class with the custom branded race car. This season it will be J.R. Todd flying the Mello Yello and DHL colors, highlighting his 2018 NHRA Mello Yello championship, as well as celebrating the 50-year anniversary of his primary sponsor, DHL. 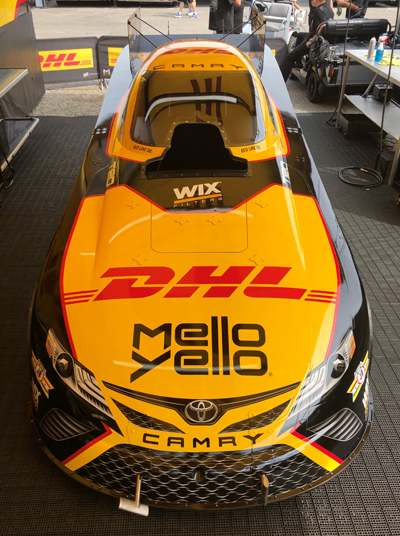 “I am very proud to be able to represent DHL and Mello Yello at this year’s U.S. Nationals,” said Todd, the defending and two-time U.S. Nationals winner. “We are going for some history trying to get three wins in a row at Indianapolis in the Funny Car class so hopefully this new look will bring me some luck.  These two companies made my dreams of being a drag racing world champion come true and I can’t thank DHL, Mello Yello and everyone at Team Kalitta enough for their support.”

“This is an historic year for DHL as we celebrate an incredible 50 year journey, still continuing to be a trailblazer in the global shipping and logistics industry,” said Christine Nashick, Chief Marketing Officer for DHL Express Americas.  “We are very excited to see J.R. chase history and his third U.S. Nationals title. Partnering with companies like Mello Yello and Team Kalitta allows us to showcase a fantastic story with great brands.”  Christine from DHL who has been following J.R. Todd’s career can’t be more proud of what the partnership with Team Kalitta has been able to produce and is excited to bring in Mello Yello into this potential historic race.

The NHRA is the largest motorsports sanctioning body in the world, and The Coca-Cola Company has been a proud sponsor of the NHRA for 18 years.

“Everyone at Coca-Cola and Mello Yello takes a lot of pride in having our brand on the reigning 2018 Funny Car champion’s car as he looks to make history at this year’s U.S. Nationals,” said Al Rondon, Sr. Marketing Manager, Sports Marketing at Coca-Cola North America. “We will be celebrating with our fans as Team Kalitta takes to the track on Labor Day weekend and we’ll all be cheering for a great performance from the DHL/Mello Yello car. We are appreciative of the support Team Kalitta and DHL have given Mello Yello on the racetrack this week.”