What happens when an unstoppable force meets an immovable object? Scientists have debated to answer to that equation for years. NHRA fans, however, saw firsthand what happens last weekend in Las Vegas when Marko Perivolaris met Luke Bogacki to decide the Super Comp title at the Denso Spark Plugs Four-Wide Nationals. A pair of NHRA sportsman racing’s most accomplished drivers, each at the top of their game, clashed in the final and not surprisingly, they were separated by just two-thousandths of a second at the finish line. The arithmetic favored Perivolaris in a 9.038 to 9.026 double-breakout. It was his third national event victory in four finals. 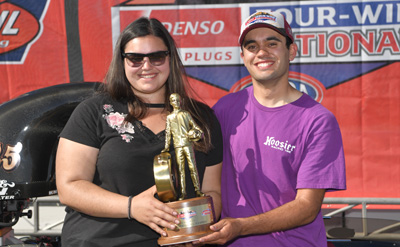 “This feels great; Luke is a great racer and the final could have gone either way,” said Perivolaris, who previously raced Bogacki in the final of the 2015 JEGS Allstars event in Chicago and lost. “Regardless of who you race, you have got to have your A game every time you stage car. I just go out and try to do the best I can.”

For Perivolaris, a former dirt bike racer who made the switch to drag racing, during the Wednesday Night events at Sonoma Raceway, the Las Vegas win could be considered a statement victory. His stock has steadily risen since his first national event win at the 2015 Auto Club NHRA Finals in Pomona. More recently he claimed a $10,000 victory during the K&N Southwest Showdown bracket event held at Tuscon Dragway a few weeks. Those wins have not gone unnoticed by his competition, but Perivolaris maintains that he isn’t overly concerned about what his opponent think, only that they respect him as a fair and honest competitor.

“Respect of my peers is important only along the lines of treating people with respect and doing the right thing,” he said. “This win was very memorable but as far as recognition, none of that matters to me; this is just what I love to do. Win or lose, every experience is memorable to me because I get to do this with my family.”

On the subject of family, Perivolaris has the support of his father, Nick, and his not-so-secret weapon is his sister, Lela, who rivals his driving talent in her role as a crew chief. Lela maintains the car between rounds including tire pressure, fuel, and cooling but her most important duty is monitoring the weather and track conditions and dialing the car. In Las Vegas, Lela’s calculations were spot-on, allowing Marko to concentrate on his driving. In the semifinals, that combination was nearly unbeatable with Marko killing the Tree with a .002 light and finishing with a 9.058 on the 9.05 index to beat Taylor Vetter.

“Lela is like me, she does the best job she can in every round, no matter who we’re racing,” said Perivolaris. “She works her tail off. She does all the dirty work and that frees me up to do a lot of mental preparation. I can analyze data and manage the temperature. We work well as a tam and that gives me as much confidence as possible.”

A recent graduate of Sonoma State University, Perivolaris now works alongside his father in the construction field but he plans to race as often as his busy schedule will allow. He plans to race in Las Vegas for two more weekends, returning for the Division 7 Lucas Oil Series Regional event this weekend and then the K&N Spring Fling bracket event in two weeks.

“I absolutely love what I do, and I plan on doing it for a long time,” he said. “thankfully, I have the support of my family as well as Mark Johnson and Panella Racing Engines, Steve Casner of CRE, Farron Lubbers of Hoosier Tire, Les Figuroa of Fig Speed, and K&N Filters. They help us keep it all together.”

The best of the rest: Doug Lambeck won his 13th national event and first since the 2017 Pomona season opener by beating Josh Lee in the final of Comp Eliminator. Lambeck, the winner of back-to-back Indy titles in 1998-99, drove his D/SMA Pontaic to a (-.453) 8.507 in the final to easily cover Lee, who slowed to a (-.189) 9.371. Lambeck lost six-hundredths in index in his round one win against Scott McClay but managed to avoid further damage in his wins against Randy Jones and Tom Mettler. Lee was penalized eight-hundredths during his quarterfinal win against Joe Mozeris. 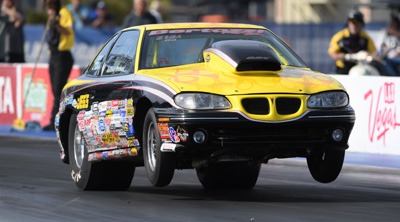 Facing an all-star lineup that included 11 former or current national champs including himself, Anthony Bertozzi capped off career win No. 23 in style with and almost perfect run in the Super Stock final. Facing Canadian Don Thomas, Bertozzi left with a .008 light and ran a 9.214 on his 9.21 dial to seal the win. Thomas likely would have beaten anyone else in the field with a package that included a .017 light and a 10.602 on his 10.60 dial. Bertozzi also won the Top Dragster title two weeks ago at the 50th annual Amalie Gatornationals.

The Stock final featured a heads-up E/SA battle between the Plymouth Duster of Justin Jerome and the Chevy Camaro of Ryan Mangus. Jerome was first off the starting line with a .007 light and powered to the win, 10.81 to 10.85. He became the latest second-generation winner, joining his father, Jeff, who won the 2011 JEGS SPORTSnationals title in Fontana. Jerome earned his spot in the final following a quarterfinal victory against Ryan McClanahan, who was driving his father, Brian’s championship winning ’69 Camaro. Jeff Jerome reached the fourth round where he lost to Billy Maddox preventing a possible father-son final round.

In his third-career final, Tanner Hiatt bagged his first win when he out-dueled Steve Williams to win the Super Gas title. Hiatt left little room with a .010 reaction time and a 10.056 on the 10.05 altitude adjusted index. Williams, the 2018 Lucas Oil Super Comp champ, was close behind with a 10.067. Hiatt, a runner-up at the 2014 Seattle and 2017 Las Vegas fall races, downed Rick Cates and Pete Zak to reach the final. Williams has now raced in 24 NHRA national event finals. 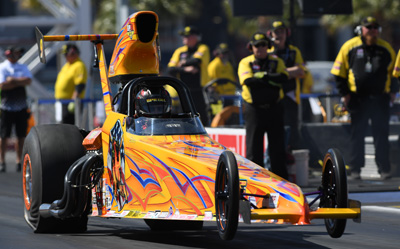 Four years after winning his fist national event title in Las Vegas, Andy Speigel struck again in Top Dragster presented by Racing RVs.com. Spiegel, who built his own engine and the engine for Top Sportsman champ Crumlich, defeated Robert Tehle in the final with a 6.736 on his 6.71 dial. Speigel defeated Ed Olpin in the quarterfinals and followed with a semifinal victory against Anthony Bertozzi, who went on to win in Super Stock. Speigel has now appeared in eight national event finals.

The quality of racing in Top Sportsman presented by Racing RVs.com continues to be second to none and no one knows that better than Doug Crumlich, who broke through for his first win in Las Vegas. Reaction times that began with .00 were the rule in eliminations, particularly the semifinal and final rounds. Crumlich was .008 in the semifinals against five-time world champ Justin Lamb and he followed with a .007 in the final to stop former Comp racer Jeff Gillette. Crumlich capped off the win with a 7.031 on his 7.01 dial while Gillette posted a 6.963 on his 6.94 prediction.