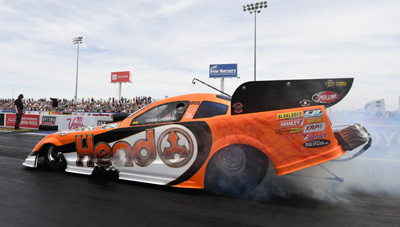 Jonnie Lindberg will not be driving Jim Head’s nitro Funny Car at this weekend’s NHRA Route 66 Nationals in Chicago. In his place, veteran driver and former Chicago winner Jeff Arend will drive the Head Contractors Mustang. Lindberg, a two-time national champion in the Top Alcohol Funny Car class, expects to miss just one event after returning to his home country of Sweden to continue his path towards U.S. citizenship.

“For the last couple of years, ever since I first came to the United States to race my alcohol car, I’ve been in the process of securing a Green Card,” said Lindberg. “My application has been processed and I had my formal interview lat week. Now, I’m just waiting for the U.S. Embassy in Stockholm to return my passport so I can travel again. I should have it back in a few days but unfortunately, not in time to make the race in Chicago. 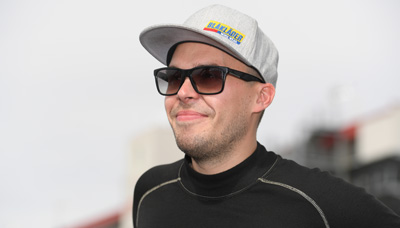 “I knew about this a month ago and talked it over with Jim [Head, team owner],” said Lindberg. “He understands that this is an important step in my life, and he was very supportive. We discussed having Jeff drive the car this week and I’m sure he’ll do a great job. I am planning to be in Topeka to tune Brian Hough’s alcohol car and then I’ll be back in Jim’s car for Bristol. By then, I should have most of this immigration stuff handled. My goal is to ultimately become a United States citizen, and this is an important step in that process. I bought a house in Brownsburg [Ind.] this year and my business, Jonnie Lindberg Motorsports, is based there. This is home for me now.”

Arend will be driving the same car that Lindberg wheeled to the semifinals in Richmond. It was the best result of the season for the Head Contractors team. A four-time national event winner in the nitro Funny Car class, including his most recent win at the 2012 Chicago race, Arend will be making his first appearance of the 2019 season at an NHRA Mello Yello Series event. Last year, he competed in three events behind the wheel of Peter and Helen Russo’s Chevy Impala. After missing the field at the Las Vegas four-wide race, Arend qualified the car at the final two events of the season in Las Vegas races and Pomona. More recently, Arend has been driving the California Hustler Nostalgia Funny Car tuned by Ronnie Swearingen.

“Jim called me a few weeks ago and asked if I’d be interested and of course I said yes,” Arend said. “Since I’ve been driving the Nostalgia car, I don’t think I’ll be rusty. I’ve had the opportunity to pinch hit a few other times and usually the first run wakes you up. We also ran 4.11 last year with Russo’s car, so I feel pretty comfortable stepping in. Plus, Chicago is a great track. It’s smooth and it has plenty of shut down and I’ve had some success there.”

During his career, Arend has driven for some of the most well-known and influential team owners in the sport including Paul Smith, Jim Dunn, Chuck and Del Worsham, Chuck Beal, Al Hofmann, and Kalitta Motorsports. At the end of the 2016 season, Arend was called on to fill in for injured Alexis DeJoria in her Tequila Patron entry.

“When teams are looking for a driver, it’s nice to know that I’m at or near the top of the list,” said Arend. “As a driver you really just want the respect of the crew chiefs and team owners that you work with, and of course your fellow drivers. To get a call from someone like Jim Head is very cool. We’ve talked many times over the years, and I think we get along very well. We’re both pretty direct and to the point. When I watched them go to the semi’s in Richmond, I was hoping it would be hot in Chicago, but I don’t think that’s going to be the case. Regardless, I’m looking forward to seeing what we can do together. It’s pretty exciting.”