Inside the cars of the NHRA Street Car Showdown at the Chevrolet Performance U.S. Nationals

This weekend at the 65th Chevrolet Performance U.S. Nationals, four street cars driven by NHRA members will attempt to reset the Street Car E.T. record in the NHRA Street Car Showdown. Here's a look at the men and their machines.
30 Aug 2019
David Kennedy
News

This weekend at the 65th Chevrolet Performance U.S. Nationals, four street cars driven by NHRA members will attempt to reset the Street Car E.T. record in the NHRA Street Car Showdown. Tom Bailey, Bryant Goldstone, Dave Schroeder, and Joe Barry are all coming to the World’s Biggest Drag Race to run their street cars on the Big Go’s hallowed quarter-mile. Their target? To run quicker than 5.85 seconds.

What kind of street car can run a 5-second e.t.? You can thank Wally Parks’ other offspring, Hot Rod Magazine, for establishing this bar. In 2005, Hot Rod’s David Freiburger launched a yearly event called Drag Week in 2005, featuring. It’s where street and strip cars racing and road tripping for five days.

The Drag Week rules allow competitors to run anything they want to enter, so long as the vehicles are registered for the street, can drive 1,000 miles, and make five dragstrip passes in five days. The vehicle with the quickest average e.t. after five days is the winner. Trailers? They are allowed, but not for the race cars. They can be towed behind the race cars to carry tools and tires.

First, to be clear, Tom Bailey owns two 1969 Camaro street cars that have won Hot Rod Drag Week. He’ll have both cars in the pits of Lucas Oil Raceway this week—and don’t be surprised if you see either of them at a local burger joint after hours.

His original twin-turbo big-block Camaro, the car Bailey refers to in conversation as “Sick 1.0,” or just “1.0,” is not scheduled to run in the Shootout. It’s the slower of his two street cars—even though it’s run 6s in the quarter-mile at more than 217 mph.

The second 1969 Camaro—the one scheduled to make passes at the U.S. Nationals— is “Sick 2.0.” It’s a carbon-bodied, tube-chassis car that represents an evolution of the blueprint used by 1.0 to be more streetable, more durable, and brutally quick. It’s the one that’s run in the 5s after driving more than 1,000 street miles on Hot Rod Drag Week pulling its own support trailer.

Sick 2.0, which appropriately wears a Michigan license plate that reads “SICKEST,” was built at  Skinny Kid Race Cars with a Steve Morris Racing Engines 526ci SMX billet-aluminum engine fed by a pair of 88mm turbos. The SMX engine is based on the wedge-head 481x architecture, but has been developed to live on the street thanks to water-cooling passages.

If Bailey’s street car is starting to sound like a Pro Mod with a cooling system, you’re not far off. Bailey holds an NHRA Pro Mod license— in fact, all of the drivers in the NHRA Street Car Showdown hold an NHRA competition license. 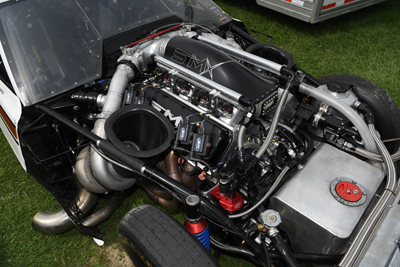 Bryant Goldstone has owned his 1973 AMC Javelin for more than 30 years. He bought it in Tucson, Arizona, while hunting for a rust-free project car to bring home to Indiana to build. But before you dismiss this AMC as merely a product of the dare-to-be-different trend of the ’90s, Goldstone’s Chevy big-block cranks out more than 2,500 hp to toss this Javelin.

That power comes from a pair of 88mm Precision Turbos cramming an unnatural amount of atmosphere into the 572ci Dart-block based engine. From there the drivetrain is similar to Bailey’s Camaro; Rossler TH400 and Strange Engineering rear end.

Where the two cars clearly diverge is the material of the body. Unlike Bailey’s carbon-fiber Camaro, Goldtone’s car wears steel quarter-panels, steel doors, and steel bumpers.  In the Drag Week world that means Goldstone’s car runs in the Ultimate Iron class with Joe Barry’s 1956 Chevy.

While the weight may not be to Goldstone’s advantage at the 65th U.S. Nationals, Goldstone does have the home court advantage. As an Indiana resident, he’s been to the U.S. Nationals, but this will be the first time he’s been on the track during the legendary event.

So how serious is he about running a strong number in front of his hometown? He actually hurt the engine in testing prior to this weekend, and had to thrash with the help of his good friends to get the car back in shape to participate. 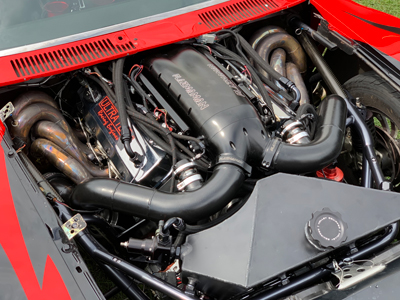 Joe Barry’s 1956 Chevy also started out as a Plan B car. As Barry tells it, his dad acquired the car while on a trip to California more than 30 years ago to buy a 1955 Chevy for $100. An extra $100 brought home this car too, and while the ’55 sold quickly in Colorado, the ’56 hung around long enough to become Barry’s Joe’s high school car.

Just like Goldstone’s AMC, Barry’s Chevy is more steel than composite. It, too, runs in Hot Rod Drag Week’s Ultimate Iron class where it has been a fan favorite. The car’s current set up is a Drag Week-proven street/strip combo: twin-turbo big-block Chevy engine with a TH400 automatic transmission and Ford 9-inch-based rear end.

With more than 30 years of hot rodding under its belt this car has seen action ranging from PSCA racing to Hot Rod Magazine’s Power Tour and has attended a zillion cruise nights and car shows in between. But in its current form Barry is all about running with his buddies at Drag Week—and coming to the U.S. Nationals to show the crowd what his Chevy can do. 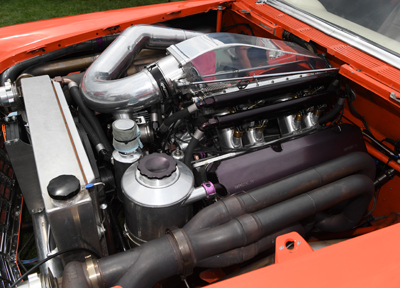 By now you’re probably thinking that all muscle car-era Chevys came with twin-turbo’d big-blocks, but that’s where Dave Schroders 1966 Grand Sport-themed Corvette diverges from the rest of this group. While both Goldstone and Barry’s car once had nitrous-fed engines under the hood, Schroeder’s Corvette has stuck with the N2O power adder to feed his mountain motor in the Sting Ray.

Schroeder and his cousin John Ens campaign this car on a yearly basis in the Unlimited Class at Hot Rod Drag Week. Like the other cars in our Shootout, it too has towed its own trailer and driven more than 1,000 miles in a week while running 6 and 7 second quarter-miles.

In terms of engine size to passenger compartment ratio, this car is the tightest to be in during any street drive. And with those twin throttle bodies poking through the hood and a wicked exhaust note from the sidepipes (no turbos to muffle the sound on this car), it’s also the one that gets immediate looks everywhere it goes.

Like our other three racers, Schroeder plans to attend the 2019 Hot Rod Drag Week event that begins at Virginia Motorsports Park on September 9, 2019, but he was thrilled for the chance to bring the Corvette out to run in front of Chevy fans first. 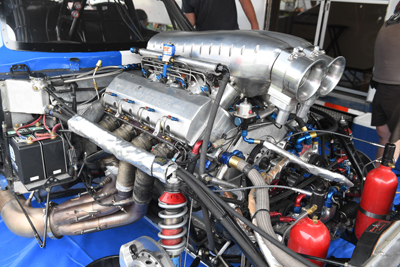 Tickets for the Chevrolet Performance U.S. Nationals can be purchased by calling the NHRA Ticket Sales Center at (800) 884-NHRA (6472), or online at www.NHRA.com/tickets. Kids 12 and under are free in general admission areas with a paid adult. To honor the Salute to First Responders, military and first responders can save 20 percent on general admission tickets at the gate.