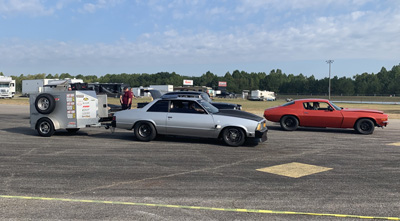 NHRA fans have grown to love the five-second, 250-mph door cars that compete in the E3 Spark Plugs Pro Mod series. Now, just imagine those same colorful supercharged, turbocharged, and nitrous-equipped machines, motoring along an interstate highway pulling a small trailer from track to track for more than 1,000 miles.

Seems a bit far-fetched, doesn’t it?

Not if you’re competing in Hot Rod Magazine’s Drag Week, a grueling test of man and machine that attempts to find the answer to the age-old question of who’s got the world’s quickest street machine.  Nearly 400 competitors are set to compete in Drag Week, which kicks off Monday morning at Virginia Motorsports Park. There are additional stops scheduled for Cecil County, Md., Atco, N.J., and Budds Creek, Md., before a return to VMP on Friday, Sept. 13. Competitors must make at least one run at each track, but there’s a catch, and it’s a big one. All vehicles must be driven from track to track along a prescribed route that features multiple checkpoints. Vehicles cannot be trailered and there are no support vehicles allowed. Vehicles can pull a small trailer containing spare parts, tires, tools, and other maintenance and repair equipment.

The Drag Week motto is “Drive it fast, make it last” and therein is the big challenge. Making a minimum of five runs in five days should be fairly straightforward for most racers but driving and maintaining a car over a 1,000-mile journey is often a deal-breaker. Nearly 400 cars start Drag Week but significantly fewer will finish the marathon. That’s not for lack of effort as each year, details circulate of late-night roadside transmission swaps, hotel parking lot engine rebuilds, and countless other McGyver-like efforts put forth by racers in order to remain in competition.

Drag Week rules allow for a wide variety of vehicles, and there’s more than dozen classes for almost every vehicle imaginable, but the one stipulation is that they must all be registered for street use. All competitors must produce a valid state registration and proof of insurance. Tech inspectors also check headlights, turn signals, brake lights, horn, wipers, etc.

A week after making an abbreviated appearance at the Chevrolet Performance U.S. Nationals at Indy, Drag Week regulars Tom Bailey, Dave Schroeder, Joe Barry, and Bryant Goldstone have arrived at Virginia Motorsports Park to compete in Drag Week’s Unlimited classes. Last year, Bailey captured the Unlimited title in his turbocharged ’69 Camaro RS, and he did so with a 6-second average. Goldstone was the king in Ultimate Iron with 7.07-second average in his ’73 AMC Javelin.

Roadkill’s Mike Finnegan, who thrilled NHRA fans at the Pomona season-opener when he wheeled his supercharged Hemi-powered ’55 Chevy gasser to a match race win against Hoonigan’s Jon Chase, is also one of Drag Week’s biggest stars.

From mechanical innovations and back-yard engineering, to the never-say-die attitude of its competitors, Hot Rod’s Drag Week is exactly the type of event that late NHRA founder Wally Parks would have loved. Drag Week also adheres to NHRA’s founding principle of taking racing off the streets and putting it in a controlled environment. It is an event for street cars, but it is not a street race.

My own fixation with Drag Week began several years ago when the event made a stop at my home track, Lucas Oil Raceway Indianapolis. It was a fantastic event as a spectator, but I wanted to become a participant. Over the next two years, we transformed my 2014 Mustang GT from a stock 13-second car to a 10-second street sleeper with the addition of a VMP Gen 2 supercharger and a few other performance mods. Last year, I made my Drag Week debut and accomplished my primary goal of maintaining a 10-second average during stops at Atlanta Dragway, zMax Dragway, Bristol Dragway, and Darlington, S.C. 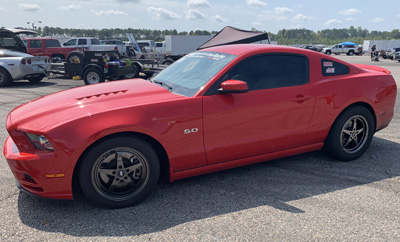 My car fits (almost) perfectly in the Street Machine class, which is reserved for mildy-modified cars that run 10.00 and slower. Unlike the rest of the Drag Week classes where the winner is determined by the quickest average elapsed time for the week, Street Machine Eliminator, features a bracket racing-style run-off among the competitors with the 32-quickest averages. A 10.96 average was personally rewarding, but it wasn’t nearly enough to break into the field, which featured a quick 10.74-second bump spot.

Vacation time reserved, I’m back for another shot at Hot Rod’s Drag Week this year and while I’d love to make the Street Machine field on Friday, I’ll happily settle for a trouble-free week spent hanging out with a few old friends, a few new ones, and okay, maybe a new personal best before I arrive in Reading for next week’s Mopar Express Lane NHRA Nationals. Stay tuned this week for updates from the road.