Idaho Governor Brad Little and NHRA President Glen Cromwell recently participated in a ceremony on the starting line of Firebird Raceway where the governor delivered a proclamation to Firebird Raceway for its preservation of drag racing history and statewide historic significance in the Gem State.
13 Aug 2019
Posted by NHRA.com staff
News 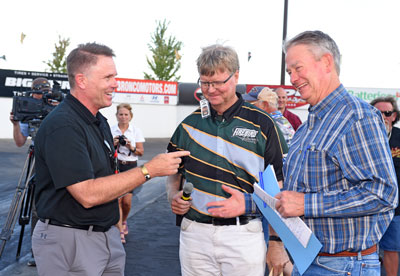 "This is an unbelievable event," expressed Cromwell. "I can't thank you and your entire family enough, along with your Dad and Wally Parks, two of the greatest men in drag racing."

Firebird's Scott New introduced the Governor who delivered a proclamation to Firebird Raceway for its preservation of drag racing history and statewide historic significance in the Gem State. Little, who grew up in nearby Emmett, also revealed that he attended his first Firebird drag racing event as a teenager with his parents just over 50 years ago.

"Firebird Raceway is a major drag racing venue in the Pacific Northwest and one of the premiere dragstrip venues in the country, and has been for 50 years," stated Governor Little. "The New Family has shown its commitment to the historic integrity of the state through outstanding stewardship. I, Brad Little, Governor of Idaho, do hereby proclaim August 10, 2019 to be Firebird Raceway Day."