Clapshaw, a Funny Car event winner and Top Fuel finalist, ran his own cars for years out of his Hillsboro, Ore., base but is perhaps best remembered for generously loaning his Spirit of Las Vegas Top Fuel dragster to legend Don Garlits for the 2001 U.S. Nationals, providing “Big Daddy” with the car to make his long-desired first 300-mph pass.

Clapshaw, who won the Funny Car title at 1995 NHRA Mid-South Nationals in Memphis in his Fuelish Pleasure Mustang, moved to Las Vegas and transitioned to Top Fuel and was runner-up behind Tony Schumacher at the 2000 U.S. Nationals.

The following year, Garlits was attempting to make a brief comeback in Top Fuel fulfill his long-held dreams of making four-second and 300-mph passes to complete his resumé but was informed by NHRA officials that his Swamp Rat XXXIV did not meet new rules requirements. 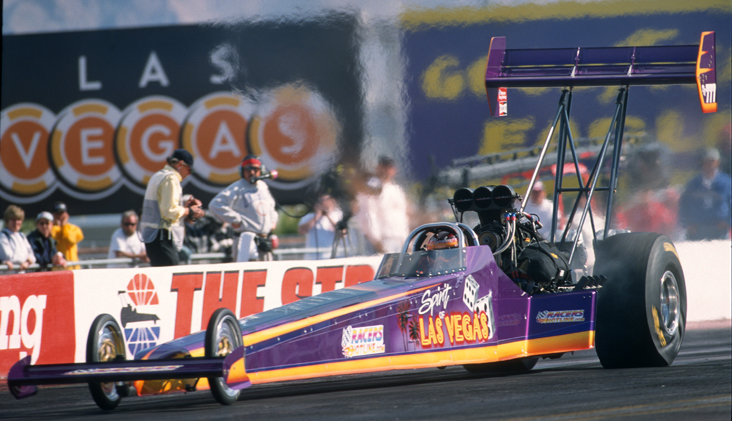 Clapshaw, whose car was already entered at the event, heard of Garlits’ plight and offered his own car for Garlits’ mission. Prior to the event, Garlits’ best runs were 5.07 at 287 mph, but he wheeled Clapshaw’s car – rebranded with sponsorship from Matco Tools -- to performances of 4.720 and 303.37 mph.

Clapshaw made his fortune in the landfill business after scrapping his way through jobs in the logging and construction businesses. He had long been a gear head, building and modifying and then racing his hot rods and competed on the nostalgia-racing circuits in a Jr. Fuel dragster

In 1990, he bought the ex-Dennis Forcelle Simpatico Top Fueler but never ran it, falling in love with the Funny Car class after spending some time with the late Joe Pisano. He bought a pair of Funny Cars from Kenny Bernstein, who had just returned to the Top Fuel class, and made his Funny Car debut in 1991. He won the 1995 Memphis event and posted several other late-round finishes before moving to Top Fuel.

Clapshaw had other interests outside of drag racing, including extreme snow skiing, sailing, and fishing.