Ford Performance, along with Ford Customer Service Division (FCSD) and its brands Motorcraft and Quick Lane, have signed a multiyear deal with NHRA team owner and driver Bob Tasca III, continuing a long relationship with his Mustang Funny Car operation.

The deal comes on the heels of one of Tasca’s most successful seasons of his career. In 2019, the Motorcraft/Quick Lane team won two races in four final-round appearances in NHRA Drag Racing’s premier Mello Yello series -– a monumental feat for a team that came back to fulltime competition last year.

“It was my commitment to all of the fans and supporters of Ford that wanted to bring the Blue Oval back to professional drag racing to deliver a championship-level program,” Tasca said. “I’ve never been prouder of my team and the effort that was put in to deliver on the commitment that we would win and compete for a championship. We took the championship fight right down to Pomona this year. To be starting 2020 with a contract extension from Ford, with (crew chiefs) Jon Schaffer and Mike Neff leading an extremely talented crew, I’ve never been more excited to start a season.”

“We’re very excited about the competitive progress the NHRA program showed in the first year with the new Mustang body,” said Mark Rushbrook, Global Director, Ford Performance Motorsports. “Our goal is always to be championship-capable, and Tasca Racing was in the hunt for the title until the final race this year. We’re supportive of the new co-crew chief relationship with the team and are confident the technical collaboration between Ford Performance and team will lead to an even better 2020 season.” 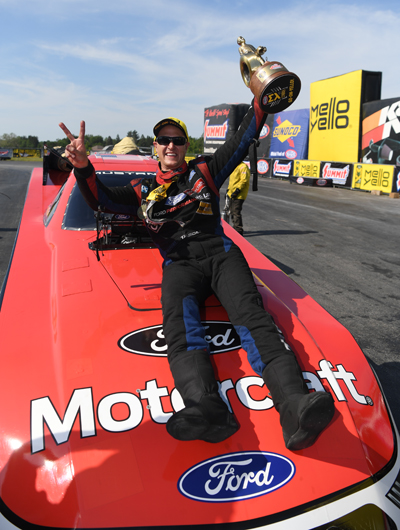 Tasca finished fifth in the championship points standings this season. It was a news-filled year for Tasca, who reunited Neff and Schaffer as crew chiefs and reset both ends of his career bests in a brand-new Mustang body designed by Ford Performance. His best marks for the 1,000-foot course now sit at 3.855 seconds (St. Louis) and 335.32 mph (Reading, Pa.).

The team sponsor relationship with the Motorcraft and Quick Lane brands will extend FCSD’s long support of the NHRA and the opportunity to reach its passionate fans.

“Bob has such great insight into what our goals are and has been terrific in helping us get the message out that there are jobs available at our Ford and Lincoln dealerships to the right audiences,” said Jasmine Pendleton, Marketing Manager for FCSD. “That skill is invaluable in a spokesman and we are happy to have him.”

According to the Bureau of Labor and Statistics, the automotive service technician industry will face a shortage of 45,000 technicians per year now through 2026. In 2018 FCSD, with Tasca, launched a new initiative with the NHRA Youth and Education Services (YES) program, as part of a comprehensive technician recruitment, recognition, and retention strategy, to help get the word out that Ford and Lincoln Dealerships have jobs to fill. They expanded their involvement with the YES program in 2019, with Tasca continuing as a panelist, delivering an inspirational message the thousands of students and educators who attend.