Drew Skillman clinched the 2019 SAM Tech.edu Factory Stock Showdown championship at the close of qualifying Saturday at the AAA Texas NHRA Fall Nationals in Dallas. Following an impressive three-win season, Skillman built a commanding lead in the standings and locked up the title just by making qualifying passes at the event. Skillman fought hot weather and tricky track conditions and failed to make the field, but already had amassed such a substantial lead that he locked out all other contenders.

“This being our first championship, it means everything,” said Skillman.  “We have been working extremely hard this year and put in a ton of effort. We brought all of the guys over from the Pro Stock team to work on this project with myself and my father, and this is the culmination of all o the work. Thanks to everyone at SAMTech, everyone at NHRA, everyone at Ford Motorsports, everyone at Performance Ford and Ray Skillman. They are the reason we got to do this.”

Skillman earned the championship in his first year in the Factory Stock class following a successful four-year run in Pro Stock that included seven national event wins and the 2015 Auto Club Road to the Future award as the series’ top rookie. 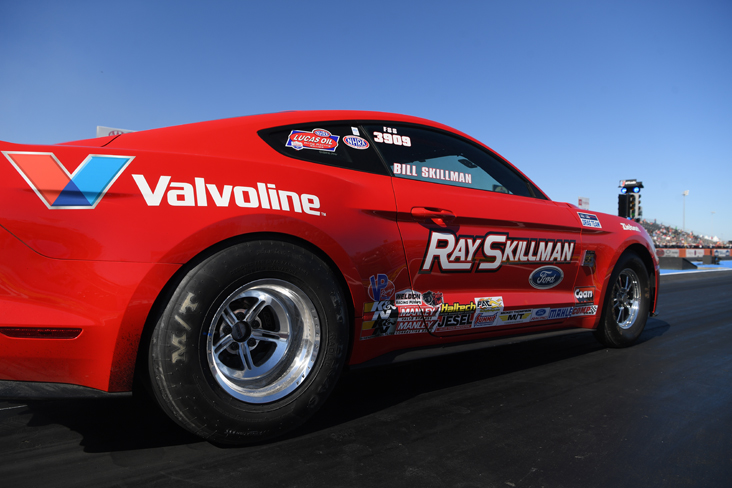 Entering the final event in the eight-race series, Skillman held a 63-point lead over his father, Bill, and led third-ranked Arthur Kohn by 109 points. Bill Skillman was forced to miss the Texas Motorplex event due to a personal commitment. With a maximum of 118 points available at each event, Kohn cannot catch Skillman, even if he is the low qualifier and wins the race. Skillman was able to build his commanding lead after driving his Cobra Jet Mustang to victories in Gainesville, Richmond, and Norwalk. He also reached the semifinals at the most recent race in St. Louis which all-but locked up the title.

After some dramatic off-season rule changes, Skillman and the rest of the Factory Stock Showdown teams arrived at the season-opening Amalie Motor Oil NHRA Gatornationals in Gainesville with far more questions than answers. Making a seamless transition from Pro Stock to Factory Stock, Skillman made the quickest pass of the weekend with a 7.71 and won the event following a Ford vs. Chevy final round against Stephen Bell. Two races later, Skillman padded his lead by beating fellow Pro Stock alumni Bo Butner in the final of the Virginia Nationals in Richmond. A memorable third win in Norwalk, which featured an all-Skillman final round with father, Bill, was almost enough to ensure the title.

In addition to his three Factory Stock titles, the versatile Skillman also won the Stock Eliminator title at the Four-Wide Nationals in Charlotte and he reached the semifinals in both Super Stock and Stock at the Division 3 Lucas Oil Series event at his home track, Lucas Oil Raceway Indianapolis.

The SAM Tech.edu Factory Stock Showdown, which features intense side-by-side competition between supercharged factory-built muscle cars from Chevrolet, Dodge, and Ford, enjoyed another record-breaking season both on and off the track. More than 40 drivers took part in at least one event, and the Chevrolet Performance U.S. Nationals featured the class’ first 32-car field.