For Don “the Snake” Prudhomme and co-driver Jagger Jones, just finishing the NORRA Mexican 1000 race last week was a major accomplishment that showed the toughness and resilience that made Prudhomme a racing legend.
08 May 2019
Posted by NHRA.com staff
News

For NHRA legend Don “the Snake” Prudhomme and co-driver Jagger Jones, finishing the NORRA Mexican 1000 race last week was a major accomplishment that showed the toughness and resilience that made Prudhomme a racing legend and shows that Jones should have a long and successful racing career as well.

The duo raced together in a JEG’S High Performance Mail Order and Lucas Oil-sponsored 2019 Polaris RZR 1000 prepped by P.J. Jones, Jagger’s father, and finished 16th unofficially in the Stock Turbo UTV class. Heading into the final day of the race Prudhomme was not sure if they would be able to take the iconic checkered flag.

“We had to make a decision in La Paz (Wednesday night) when we were working until about two in the morning. We were actually just going to put it on the trailer because we couldn’t find the problem,” explained Prudhomme. “We didn’t want to be stuck out in the desert. That is the worst. We decided that if we both drove it and took it easy we could finish the race. That is what we did.” 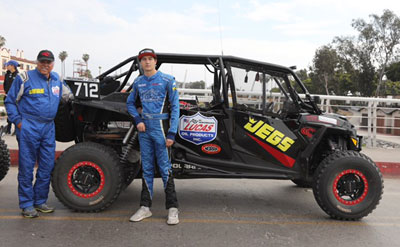 On the final day of the race Prudhomme and Jones took turns racing as fast as they could without taxing the engine. They were forced to stop regularly to top off the fuel tank to keep their two-cylinder engine happy and under maximum power.

“We nursed it home. Finishing is an accomplishment,” said Prudhomme. “There are cars on the side of the course. Crashed and out of the race. We passed all kinds of cars on the last day. We passed Tanner Faust (Global RallyCross racer and X Games medalist). He was rolled over on his side.  He was OK or else we would have stopped to help him.  He just waved at us going by. Even big teams with professional racers can crash out in this thing. All day it looked like roadkill on the side of the road with so many cars crashed or upside down.”

The experience for 16-year-old Jagger Jones, a rising star in the NASCAR K&N Series, was one of mutual respect and racing excitement. This was the second time competing in the event for both drivers and Jones felt like they both brought a lot to the race.

“It was awesome. Don did a really good job driving,” said Jones. “I think I was the only one that had a flat tire. It was a really good experience. The NORRA race has a lot of history. It is a real accomplishment to finish. Last year was awesome and this year racing with Prudhomme was super cool. We had some car problems on the last day. We had to stop throughout the day it seemed like every 20-25 miles to fill the car up with fuel. We didn’t know if we were going to make it the last 25 miles. We were really happy to get to the finish line.”

For Prudhomme, getting a chance to race with an up and coming professional re-energized the 78-year-old. Throughout the race he caught glimpses of himself as a younger racer as well as gained motivation for a possible return in 2020. 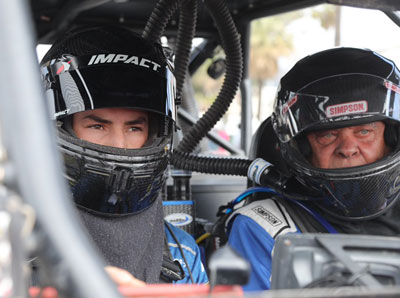 “Jagger is a mature kid and a professional already. I was just impressed with him as a race car driver,” said Prudhomme. “He might be 16 but he is a professional. I’d look over at him and he has a helmet on just like me. It doesn’t matter if you are 16 or 80 when you put on that helmet and go race. I didn’t even think of him as a young kid. He was really cool. It made me pumped up and I am thinking about doing it again. I loved doing it last year and then I thought doing it this year would be the last time. I am so excited but the only way I would do it again is if I could race with Jagger again. I would want to really work at it. We’ll have to see.”

For both drivers the fact that they were able to get across the finish line after a grueling 1,300-mile race was an accomplishment neither will forget. With over 100 wins as a driver and team owner Prudhomme appreciates the fact that winning is its own reward in a race like the Mexican 1000. He also knows he and Jones are in a select fraternity as Mexican 1000 finishers.

“It is a thrill to finish. What I like so much about this NORRA race is when you cross the finish line, they treat you like a winner,” bragged Prudhomme. “You are a winner when you finish this NORRA 1000 race. Everybody celebrates. The camaraderie here is great. It is like nothing I have seen before. What is so cool is there is no money for the winner. You get a trophy. It takes me back to the early days when I just started racing and you just liked winning a trophy. It is bragging rights here.”