During the annual SEMA Show in Las Vegas, Mopar and Dodge/SRT took the wraps off their latest offering, a new, fourth-generation version of the factory-built, Dodge Challenger known as the Drag Pak. Limited to a production run of just 50 serialized units, the 2020 Challenger Drag Pak delivers sportsman racers a new, turnkey package loaded with suspension and chassis upgrades and is certified for NHRA competition. Powered by a supercharged 354-cid Hemi engine, the 2020 Drag Pak is approved for competition in NHRA Stock and Super Stock as well as the SAM Tech.edu Factory Stock Showdown.

“Mopar and Dodge/SRT collaborated to make this factory production-based Challenger Drag Pak not only a forced to be reckoned with at the strip but also an instant collectable for Mopar enthusiasts,” said Mark Bosanac, Head of Mopar Service, Parts & Customer Care, FCA - North America. “Our legacy has been won at the track by the women and men who pour all they have into being the best. This new Challenger Drag Pak gives them the tools to stay in front of the competition.” 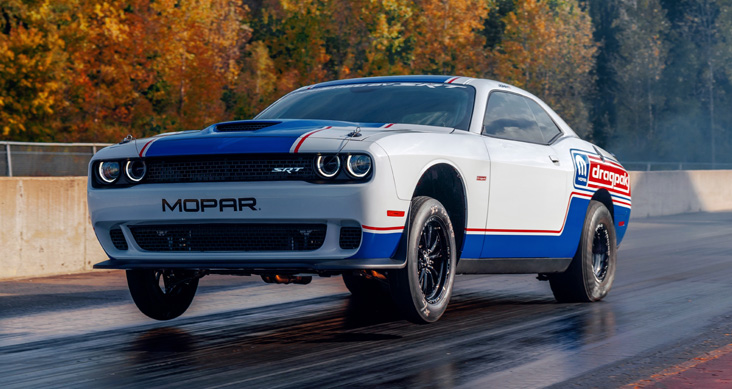 Building on lessons learned with the third-generation Drag Pak, the new fourth-generation Challenger Drag Pak offers racers the choice of buying a complete, turnkey package ready for the track or a variety of modular kits to install on their own Challenger. Construction of the Challenger Drag Pak begins with a standard-width Dodge Challenger body-in-white (BIW) unibody built at the FCA Brampton Assembly Plant in Brampton, Ontario. An SFI-specification roll cage, rated for quarter-mile runs as quick as 7.50 seconds, is integrated into the body. Featured components include a Strange rear axle assembly with adjustable coil over shocks, a four-link suspension with wishbone and an anti-roll bar. Wheelie bars and a parachute mount are also integrated into the chassis and are standard. Up front, a unique engine cross member lowers the center of gravity and improves weight distribution. The front also includes specific Bilstein double-adjustable struts.

“We want this to look so cool that when the customer buys a Challenger Drag Pak he or she wants to run these graphics because they are so iconic and stand out,” says Mark Trostle, Head of Performance, Passenger Car and Utility Vehicle Design for FCA – North America. “Mopar people are proud of the heritage and the look and they want to show that off.”