Fricke left three-hundredths ahead of Severance in the Top Alcohol Dragster final, and it was enough to secure a fourth national event title, 5.319 to 5.286. Before the final, Fricke’s Doosan/Finke Equipment dragster had been solidly in the 5.2s in wins against Johnny Ahten, Garrett Bateman, and Shawn Cowie. Severance, the defending event champion, also rode a string of 5.2s to the final, including a best of 5.222 in his quarterfinal win against Chris Demke. [video] 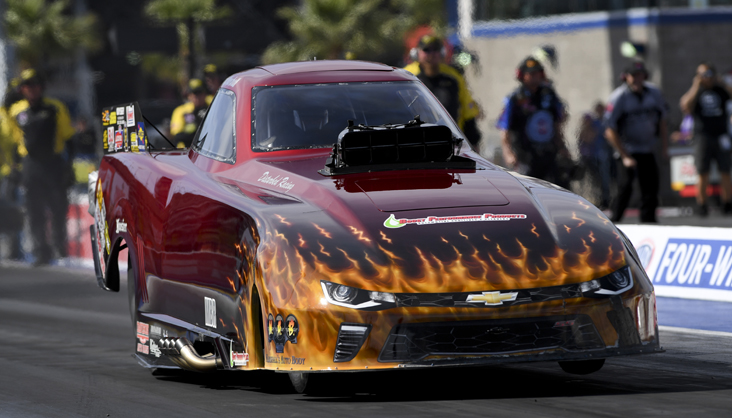 Since his first national event title last year in Seattle, Marshall has become one of the performance leaders in Top Alcohol Funny Car, and he proved it in Las Vegas, where he stopped Doug Gordon to win his second national event. Marshall made back-to-back runs of 5.46 and 5.47 in his wins against Brian Hough and reigning champ Sean Bellemeur and then won the final with an off-pace 5.70 after Gordon slowed to a 6.15. [video] 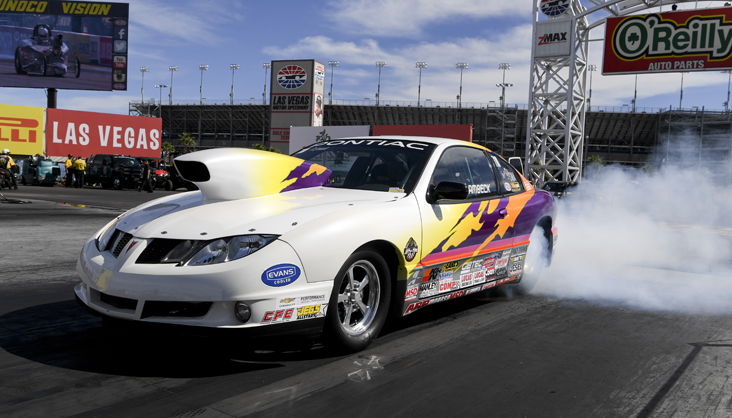 Lambeck won his 13th national event and first since the 2017 Pomona season opener by beating Josh Lee in the final of Comp. Lambeck, the winner of back-to-back Indy titles in 1998-1999, drove his D/SMA Pontiac to an (-.453) 8.507 in the final to easily cover Lee, who slowed to a (-.189) 9.371. Lambeck lost six-hundredths in index in his round-one win against Scott McClay but managed to avoid further damage in his wins against Randy Jones and Tom Mettler. [video] 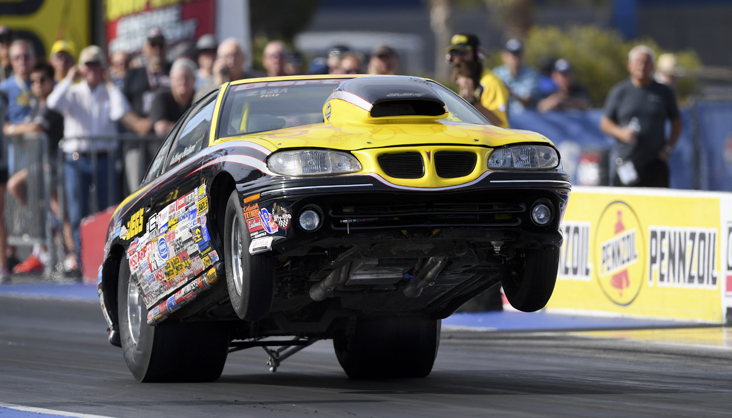 Bertozzi capped off career win No. 23 in style with an almost perfect run in the Super Stock final. Facing Canadian Don Thomas, Bertozzi left with a .008 light and ran a 9.214 on his 9.21 dial to seal the win. Thomas likely would have beaten anyone else in the field with a package that included a .017 light and a 10.602 on his 10.60 dial. Bertozzi also won the Top Dragster title two weeks earlier in Gainesville. [video] 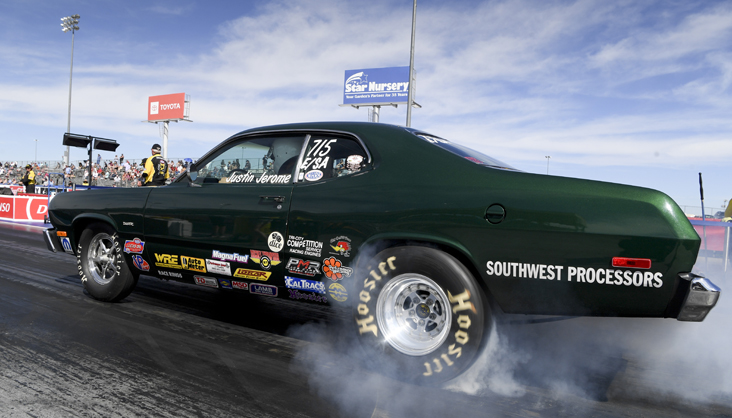 The Stock final featured a heads-up E/SA battle between Jerome and Ryan Mangus. Jerome left first with a .007 light and powered to the win, 10.81 to 10.85. He became the latest second-generation winner, joining his father, Jeff, who won the 2011 JEGS SPORTSnationals title in Fontana. Jerome earned his spot in the final following a quarterfinal victory against Ryan McClanahan. Jeff Jerome reached the fourth round, where he lost to Billy Maddox, preventing a possible father-son final round. [video] 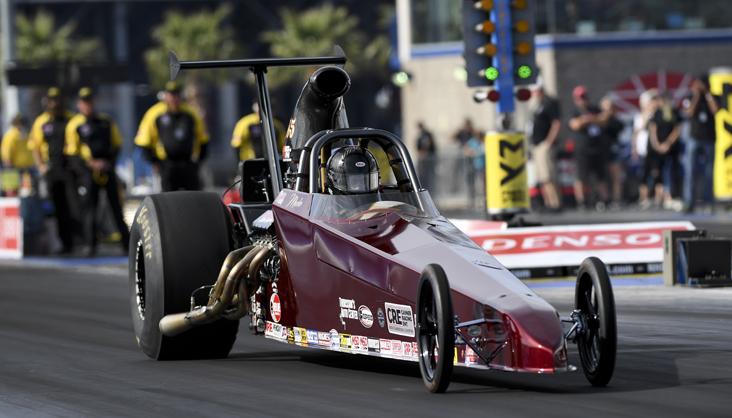 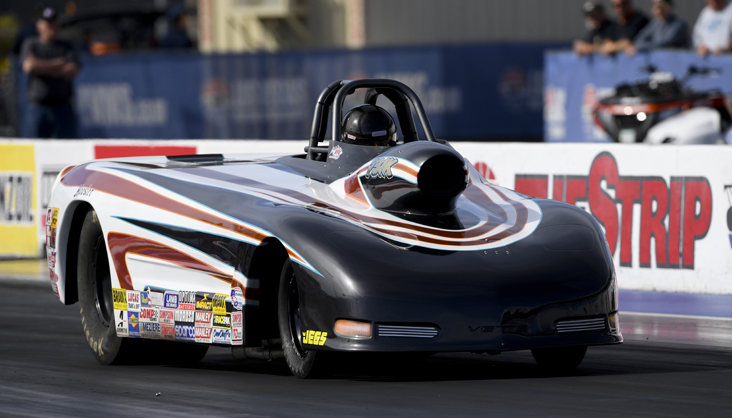 In his third career final, Hiatt bagged his first win when he out-dueled Steve Williams to win the Super Gas title. Hiatt left little room with a .010 reaction time and a 10.056 on the 10.05 altitude-adjusted index. Williams, the 2018 Lucas Oil Super Comp champ, was close behind with a 10.067. Hiatt, a runner-up at the 2014 Seattle and 2017 Las Vegas fall races, downed Rick Cates and Pete Zak to reach the final. [video] 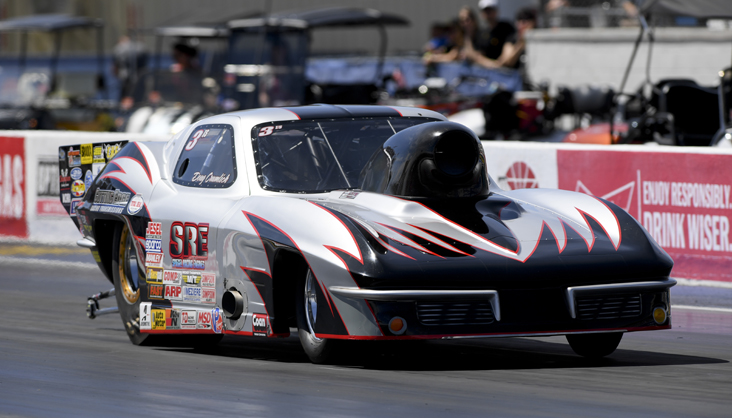 The quality of racing in Top Sportsman presented by Racing RVs is second to none, and no one knows that better than Crumlich, who broke through for his first win. Reaction times that began with .00 were the rule in eliminations, particularly the late rounds. Crumlich was .008 in the semifinals against five-time world champ Justin Lamb, and he followed with a .007 in the final to stop former Comp racer Jeff Gillette. Crumlich capped off the win with a 7.031 on his 7.01 dial while Gillette posted a 6.963 on his 6.94 prediction. [video] 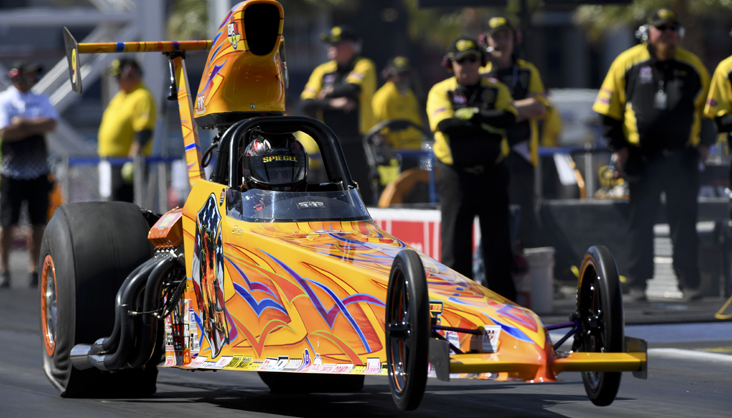 Four years after winning his first national event title in Las Vegas, Spiegel struck again in Top Dragster presented by Racing RVs. Spiegel, who built his own engine and the engine for Top Sportsman champ Crumlich, defeated Robert Tehle in the final with a 6.736 on his 6.71 dial. Spiegel defeated Ed Olpin in the quarterfinals and followed with a semifinal victory against Super Stock winner Bertozzi. [video]