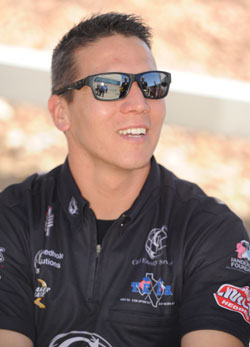 Dave Connolly, one of the most sought-after free agents in the crew member market, has landed a new home with Ken Black Racing. The multi-talented driver and tuner, who most recently guided Tanner Gray to the 2018 Mello Yello Pro Stock championship, will join the KB team. He joins a formidable line-up that already includes Rob Downing, Tim Freeman, Greg Anderson, and Jason Line. The Mooresville, N.C., based KB team currently fields Pro Stock cars for Summit-backed drivers Line and Anderson, and also supplies engines to 2017 champ Bo Butner, Deric Kramer, and Fernando Cuadra.

“I’m excited for this opportunity. I’ve butted heads with the KB team for a lot of years but we’ve always had a mutual respect for each other. When the [Gray Motorsports] program ended last season, I wasn’t sure where I was going to go or what I was going to do but we were able to work out a deal with KB and I think that’s a perfect fit. They have expanded their team and with that, the work load has gone up and they were in need of an extra set of hands. I’m happy to be able to fill that role.”

The son of former 2009 Lucas Oil Super Gas champ Ray Connolly, Dave first enjoyed success as a driver in a variety of sportsman and bracket racing classes. He later graduated to the Pro Stock class where he quickly earned a reputation as one of the class’ most naturally-gifted drivers. Behind the wheel, Connolly has won 30 national event titles in four different classes with 26 of those victories in Pro Stock. The versatile driver also got a chance to wheel a 300-mph Top Fuel dragster when he joined Bob Vandergriff’s team. He appeared in three final rounds during the 2015 season.

Connolly joined the Gray Motorsports Pro Stock team in 2016, first as a crew chief for Shane Gray. In 2017, he helped Shane’s son, Tanner, win the Auto Club Road to the Future award, and last year, Connolly helped Gray become NHRA’s youngest professional champion on the strength of an impressive eight-win season. In two years in the Pro Stock class, Tanner Gray won 13 of 48 events and appeared in 18 final rounds. Connolly became available when Gray Motorsports left drag racing at the end of 2018.

Pro Stock teams often have differing philosophies, especially when it comes to chassis set-up and clutch tuning, so Connolly admits there may be an adjustment period in his new role, but he also believes that he can learn a lot from the current KB Racing brain trust, and vice-versa.

“The KB team does not designate roles per se, so I plan to work with all of the teams, but we have a lot of talent there to share the workload,” Connolly said. “Our plan is to work together to get all the cars up and running and make each of them as competitive as possible. There are many ways to cut the cake in this class, so to speak but I’m sure we’ll find a happy medium. I expect to learn a lot, and that’s one of the things that excites me about this job.

Connolly also addressed the topic of driving. While he misses being behind the wheel, he’s comfortable in his role as a crew chief. Last year, he got an opportunity to drive a Pro Stock car in Brainerd and cut a competitive .011 reaction time in a round one loss against teammate Gray.

“I wouldn’t think I’d have an opportunity to drive this year unless I push Jason down the stairs,” Connolly joked. “Seriously, I have no plans to drive and I’m 100-percent okay with that. I’m intrigued by the mechanics of these cars and my goal is to be the best crew chief I can be. Don’t get me wrong; if an opportunity came up I’d jump in, but we have no plans right now.”

Connolly plans to get to work quickly as the KB team is preparing to head westward to Wild Horse Pass Motorsports Park in Chandler, Ariz., for a test session before heading on to Pomona for the season-opening Lucas Oil NHRA Winternationals presented by Protect the Harvest.

“I leave at 6 a.m. on Sunday [Feb. 3] and we’ll be testing for a couple of days,” said Connolly. “We might be a little behind he eight-ball compared to some of the other tems but I’m sure we’ll pick it up quickly. I know the work ethic at KB Racing and those guys don’t stop. That’s one more think that makes me excited about this deal.”