5 Minutes with Steve Torrence: What an ESPY win would mean to him and NHRA

Reigning NHRA Mello Yello Drag Racing Series Top Fuel champion Steve Torrence, who been nominated for an ESPY award, talks about what winning would mean not just to him but to NHRA in this interview from the latest issue of NHRA National Dragster magazine.
29 Jun 2019
Phil Burgess, NHRA National Dragster Editor
News

Reigning NHRA Mello Yello Drag Racing Series Top Fuel champion Steve Torrence has been nominated for an ESPY award after a dominating 2018 campaign in which he not only won the championship, but completed an unprecedented six-race sweep of the Countdown to the Championship events among his 11 season wins. Torrence, winner already this season of six events in 12 starts (including Norwalk), spoke about his hopes to win the award not just for himself but for NHRA.

Your nomination puts you on the radar of worldwide motorsports. What would winning the ESPY award mean to you if the sport rallied behind you to help you win?

It’s pretty unreal to be nominated for this award. It’s definitely a huge honor and I’m glad to represent the sport of NHRA Drag Racing. It would be huge for not only myself but for drag racing to stand a chance at winning it. 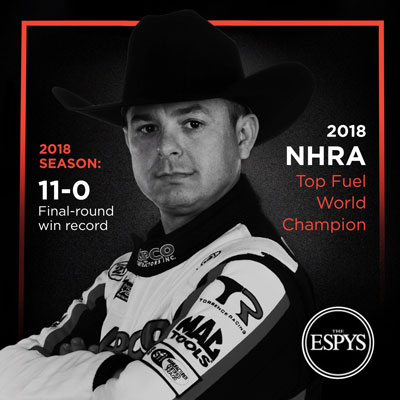 I am honored to represent the NHRA and drag racing, especially since I’m in such select company with Formula 1 [Lewis Hamilton], Indy Car [Scott Dixon], and NASCAR [Kyle Busch] drivers. It’s just a testament to the dedication and hard work of the Capco boys who put a great car under me every week.

If all the fans –- whether they like me or not -– could get behind me, it would be a good thing for NHRA. Whether you’re a Steve Torrence fan, or if you can’t stand my guts, it’s about more than me. It’s about our sport and getting the recognition that we deserve but haven’t had among other motorsports.

John Force and Brittany have been nominated [in the past]. Brittany is relatively new like me, but John has been out here for 100 years and won 16 championships; if he can’t win it, it shows that everybody needs to rally together and try to push NHRA to the front of this thing.

I’m doing everything I can; I’m voting for myself every day. Hopefully we can make it happen.

After your great streak to end last year, you put together another one that went 22 rounds but unfortunately ended in the final round of Bristol against Mike Salinas. Did that bother you at all?

I just take it for what it’s worth. We had a parts failure, a broken crank[shaft]. Not taking anything away from Mike, but we left on him – had four-hundredths on him at the starting line – and we were ahead at halftrack, but the car just didn’t last. That’s just part of Top Fuel racing. [Salinas’ crew chief] Alan Johnson was the first guy to text [Torrence’s crew chief Richard] Hogan and said, “Good job, great race, you had us beat.”

We had a parts failure, and Mike won the race. You can’t take that away from him, but it didn’t really do anything to us mentally; you know at some point that something’s going to happen, even if everyone does their job perfectly. You can’t sit around and go, “Aw, our streak’s over.” We just go racing.

What’s left for you in your career to accomplish?
I still want to win championships and stay motivated. Yeah, we’ve set records and done some things that are neat and prestigious, but there are always guys ahead of you. There’s still a long way to go and a lot of success that we need to achieve to be in those ranks with Tony Schumacher, John Force, and the legends of this sport.

If my next 36 years are as tough as my first 36, I might not make it, but we’re going to do as much as we can and enjoy it. At some point this ride will come to an end, but we’re going to live it as hard and fast as we possibly can and try to have a good time doing it.

Vote for Steve Torrence at NHRA.com/VoteSteve. Voting is open until the ESPY Award Show on July 10.