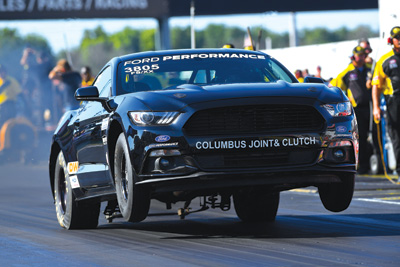 The stakes have gone up in the School of Automotive Machinists and Technology NHRA Factory Stock Showdown; way up for any driver who aspires to win consistently in 2019. Last year, the best cars in the class were able to nudge their way into the seven-second zone, and this season, it might just take a sub-eight second run to qualify at some of the events in the vastly popular eight-race series.

With Pritchett leading the charge, the Dodge Challenger Drag Pak was the dominant vehicle last year. In addition to Pritchett’s three wins, Mopar racer Joe Welch won twice and former Pro Stock driver Mark Pawuk also made it to a pair of finals in his Don Schumacher Racing-prepared Dodge. The other two events were won by Stephen Bell and Arthur Kohn, both in COPO Camaros, despite the best efforts of Ford loyalists Chris Holbrook, Chuck Watson, and Kevin Skinner. 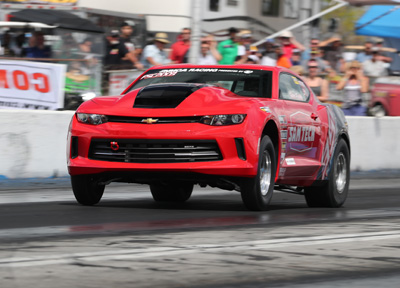 Thanks to some offseason rules revisions that promoted the use of new supercharger technology and the continued development by some of the sport’s brightest mechanical minds, the best run of 2018, a 7.93, had already been eclipsed numerous times during preseason testing. Factory Stock drivers Bill Skillman and Kevin Skinner turned in the class’ first 7.8-second runs during a January test in Florida, and defending Gainesville winner Bell reportedly ran a 7.74 in his Greg Stanfield-prepared COPO during a similar preseason outing in Louisiana. Several other drivers who tested were also rewarded with seven-second time slips.

Brian Massingill, SAM Tech’s vice president of business development, couldn’t be more thrilled about the growing popularity of the Factory Stock Showdown and the performance potential of the 2019 season. 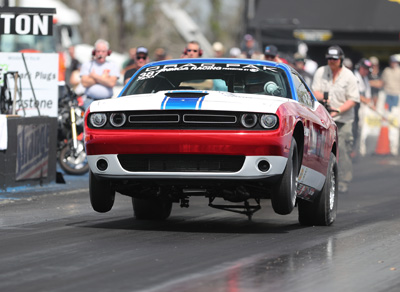 “The class has grown tremendously in the last three years, and the reasons for growth are simple,” said Massingill. “We have amazing support from the fans, from NHRA, and the manufacturers, as well as commitment from the race teams to make this class something special.

“This is a heads-up class that is running seven seconds at over 175 mph with 3,500-pound cars on nine-inch wide tires. These cars are recognizable and hold a special connection with the fans in ways that other cars can’t. A Ford is a Ford, a Chevy is a Chevy, and a Dodge is a Dodge. With the changes made this season, the 50th anniversary of the Gatornationals is going to be a really special race for this class. We’re likely to throw out some of the records after that

Given the rules changes, and the rapid advances in technology, it’s almost impossible to single out any one driver, or even a small group of drivers as the championship favorite. Pritchett and teammate Pawuk certainly rate a mention, and not just because of their success last season. The Mopar duo have all the resources they need to succeed as part of the DSR Mopar program. They also have the expertise of their crew chief, four-time Stock eliminator champ Kevin Helms. Given the strength of the Ford and GM programs, the Dodges might not come out of the gate swinging but will almost certainly be there at the end of the eight-race season. 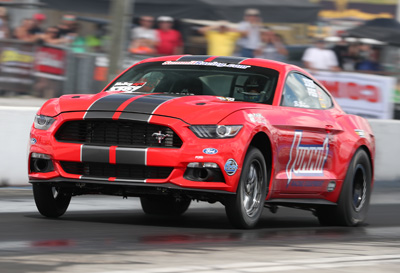 Ford fans should have a lot to cheer about this season with what figures to be more than a dozen competitive Cobra Jet entries in the mix. In addition to Holbrook, Watson, and Skinner, the Ford camp will have 2017 NHRA Mello Yello Drag Racing Series Pro Stock champ Bo Butner as well as fellow Hoosier Drew Skillman, who has left Pro Stock in favor of the Factory Stock class. Skillman will race as part of a two-car effort with his father, Bill. Carl Tasca, the uncle of Funny Car racer Bob Tasca III, will also return as a teammate to Geoff Turk, who parked his popular Blackbird Challenger in favor of a new Cobra Jet.

There is also a lot of talent in the GM camp, especially with respect to engine builders. Former Pro Stock racer Greg Stanfield is already one of the class leaders by supplying power to Bell and Kohn among others. KB Racing Pro Stock driver Jason Line is also building engines for a couple of customer teams, and the same goes for David Barton, the 2017 Factory Stock series champ.
A staunch supporter of the class since its inception in 2012, Barton has a record that includes seven wins in 11 final rounds. Barton currently races Gary Wolkwitz’s COPO Camaro. He’s also bullish on the class’ future. 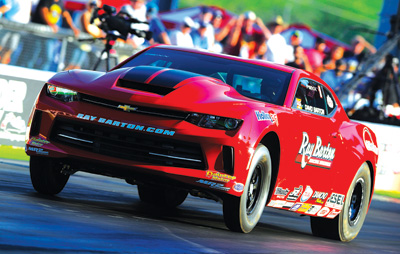 “I’ve said it many times; it’s a dream come true that new muscle cars are being made right now,” said Barton. “Ten years ago, we had to ask ourselves, ‘Where are we going with this business?’ We were tailored to old muscle cars. Technology wise, everything we learned relates to the new stuff. The transition has been a lot of fun. For the class as a whole, there’s a lot up in the air, but I do think the new superchargers will make the cars run much better. I can’t believe I’m saying this, but we could run 7.70s. Honestly, all I really want is a fair shot, so if NHRA needs to tweak the rules every couple of races to keep it level, I’m okay with that.”

While the Factor Stock Showdown might be relatively new, the class has attracted a handful of names that might be familiar to even casual NHRA fans. In addition to nitro racer Pritchett, current or former Pro Stock drivers now in the class include Butner, Pawuk, Drew Skillman, Roy Hill, and 2012 world champion Allen Johnson. After spending more than a decade in Pro Stock, Nick Mitsos, owner of the Mountain View Tire team, is also making the move to Factory Stock with a new COPO Camaro driven by longtime crew member Ryan Priddy.