Pro Stock’s Alex Laughlin puts a Dodge in his garage 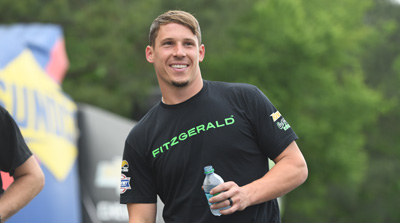 Alex Laughlin has a garage full of cool race cars including his Gas Monkey-backed Pro Stock Camaro, a 220-mph small-tire Corvette, and a Pro Mod-style Dodge Challenger and now he’s going to try something a bit different when he debuts a new Dodge Dart Pro Stock car during this weekend’s Lucas Oil NHRA Nationals in Brainerd. Laughlin’s new ride will feature the red, white, and blue colors of Technet Professional Automotive Services but the big change will be under the hood where the car will be equipped with a 500-cid GM engine from Elite Performance.

“So, the deal in Pro Stock right now is that the fastest cars are all Jerry Haas [-built] cars,” said Lauglin. “The problem is that there is not a plethora of them laying around. We’ve been trying to come up with a different car for me for the last four races because I’ve been struggling with mine for most of the season. My Camaro is perfectly fine to half-track; it is usually at the top of the charts but from the eighth-mile on it’s about three-hundredths slow. I’m usually ahead at half-track and then get driven around. We’ve changed the brakes, transmission housing, the engine, and completely re-wired the car and we still can’t find what’s wrong.”

Laughlin’s search for a suitable Jerry Haas-built race car, eventually led to the Colorado-based American Ethanol team of Deric Kramer and his father, David. After making the off-season switch to a KB-powered Camaro, they not only had a large assortment of Hemi engines, but they also have at least two Dodge Dart race cars including one built by Haas. The car has been in action earlier this year with rookie Will Hatcher behind the wheel. Now, Laughlin has borrowed it for the balance of the 2018 season.

“We looked for a Camaro and the only one we could find belonged to Bob Benza and it was a brand-new car,” Laughlin said. “I believe the Gray team also has one but I’m not sure they’d be willing to just hand it over to us, given our recent history. We talked to the Kramers in Seattle about their Dart and they said, ‘Come get it.’ We didn’t buy it. We’ve just borrowed it for the season.” 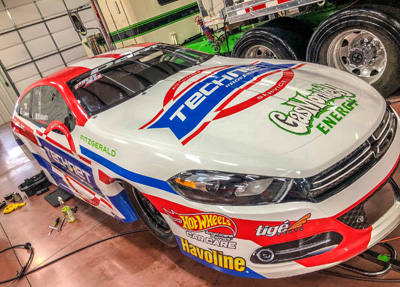 Converting the Dart from Mopar to GM power requires, among other things, new engine and mid plates, new headers, and some other minor changes such as air intake and throttle linkage. Laughlin estimates that his team has worked 12-14 hours a day for the last week preparing the car for its Brainerd debut.

“We finished it up last night [Tuesday] but we still haven’t fired the engine,” Laughlin said. “Unfortunately, we have not time to test so our first run will be Q1 in Brainerd. We’ll see how that goes. I was able to use my clutch pedal and my pour-in seat. Sitting in the car, it feels exactly the same as a Camaro except it’s a little harder to see out of.”

Ultimately, Laughlin believes the Dart will be as good or better than the rest of the Camaro entries that are fielded by the Elite team including the Haas-built cars raced by teammates Jeg Coughlin Jr. and Erica Enders, who have combined for four wins this season.

“Everyone says there was a lot of time spent on this Dart car in the wind tunnel, so it should have an advantage over the Camaro, at least theoretically. If all goes well, we should have great power and great aero. I’m just hoping for a solid weekend.

Laughlin heads to Brainerd in 11th place in the Mello Yello Pro Stock standings and he’s 214 points behind tenth-ranked Bo Butner. With two races remaining before the start of the Countdown he understands that’s a tall mountain to scale, but not insurmountable given that the Chevrolet Performance U.S. Nationals offers points-and-a-half.

“Honestly, I haven’t even been keeping up with the points,” said Laughlin. “That would be just one more thing to add to my bucket of stress. I haven’t heard that I’m out of the top 10, so I guess it’s still possible.”

Laughlin also hinted at additional changes going forward including the possibility of more Pro Mod races. He’s currently having a multi-purpose Plymouth Duster built that can compete in NHRA Pro Mod, No Prep, or small tire events. Pending sponsorship, he  could also make an appearance behind the wheel of something a bit quicker.