Papa John’s International, Inc., has extended its sponsorship agreement to be the Official Pizza Sponsor of NHRA for the 2018 drag racing season.
17 Mar 2018
Posted by NHRA.com staff
News

Papa John’s International, Inc., the world’s third largest pizza delivery company, has extended its sponsorship agreement to be the Official Pizza Sponsor of the NHRA for the 2018 drag racing season.

Papa John’s involvement in NHRA drag racing began in 2016 with its sponsorship of Top Fuel drag racer Leah Pritchett and Don Schumacher Racing. The brand will continue its sponsorship of Pritchett’s Top Fuel dragster in 2018 as she and her team build on the success of their 2017 season. Papa John’s and Leah Pritchett will also continue to participate in the Charity Challenge racing series to raise money for returning military heroes and their families.

“Last year, we were able to donate $100,000 to the Infinite Hero Foundation by racing my original 1971 Camaro Z28 that I had to sell years ago that led to opening the first Papa John’s,” said “Papa” John Schnatter, Founder and Chairman of Papa John’s. “We love this cause, we love racing, and can’t wait to get on the track again in 2018 to support our heroes who have served in the armed forces.”

Infinite Hero Foundation is a non-profit 501(c)(3) organization that provides resources to help the mental and physical issues that returning military heroes and their families may face. A portion of the funds donated to Infinite Hero Foundation will benefit Overcome Academy, a non-profit organization which focuses on specific leadership training for wounded warriors. 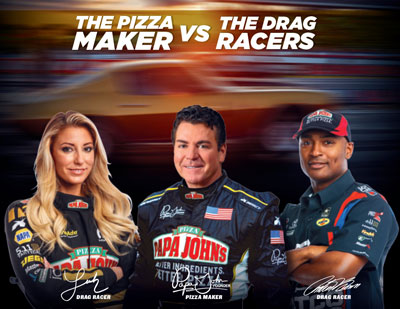 This year, Charity Challenge races will have increased competition as Leah’s DSR teammate and 3x NHRA Top Fuel champion Antron Brown will be racing against “Papa” John in select markets.

In addition to participating in the Charity Challenge races, Leah will be on-site at select Papa John’s locations throughout the year making pizzas for NHRA fans that visit the restaurants. The events will be broadcast on Facebook Live.  The first Facebook Live event kicked off at Papa John’s in Gainesville, Fla., on March 15..

“We are thrilled that Papa John’s is continuing its relationship with NHRA,” said Brad Gerber, NHRA vice president and chief development officer. “NHRA provides high-speed excitement to more fans each year, and our growth creates a powerful platform of opportunities for sponsors like Papa John’s. We look forward to continued success in 2018.”

As the Official Pizza Sponsor of NHRA, the company reaches fans across the country through all 24 of the NHRA Mello Yello Drag Racing Series national events and on NHRA Fox Sports broadcasts. 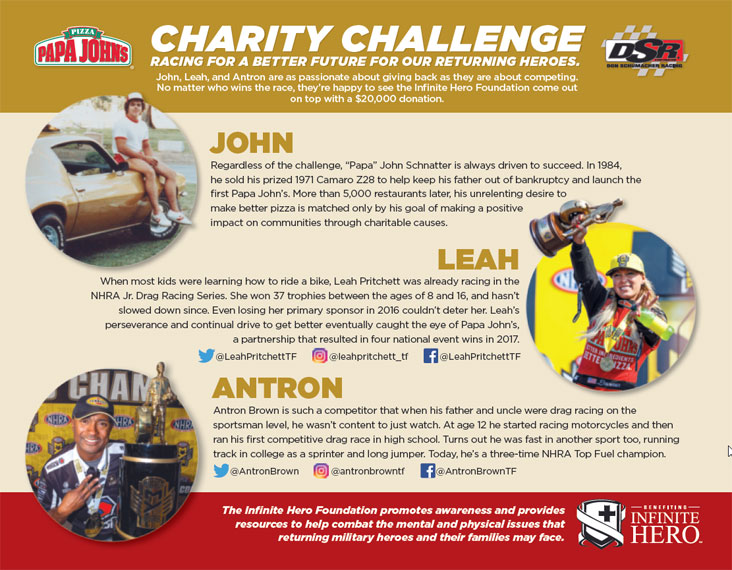