Bellemeur clinched the championship on Saturday when he beat DJ Cox in his round-two matchup then knocked out Andy Bohl in the semifinals and Phil Burkart in the final round with a strong 5.403. Burkhart left first but lost traction while Bellemeur cruised to the title. The championship is the second in Top Alcohol Funny Car for team owner Tony Bartone, who won as a driver in 1996. [video] 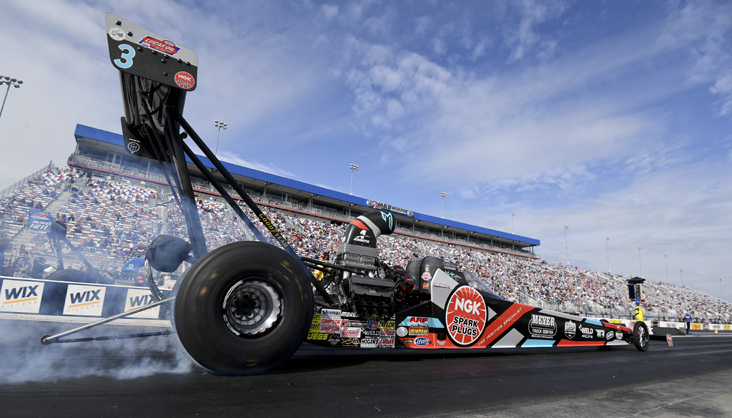 Meyer, who qualified third, posted low e.t. and top speed of the event in round one with a 5.200, 283.01 mph to defeat Tiffany Januik in Top Alcohol Dragster. Meyer went on to race reigning and three-time champion Joey Severance in the final. Severance, in the hunt for a fourth title, was out first but then had problems as Meyer took the lead and held on for her fifth career win in 5.421 seconds. [video] 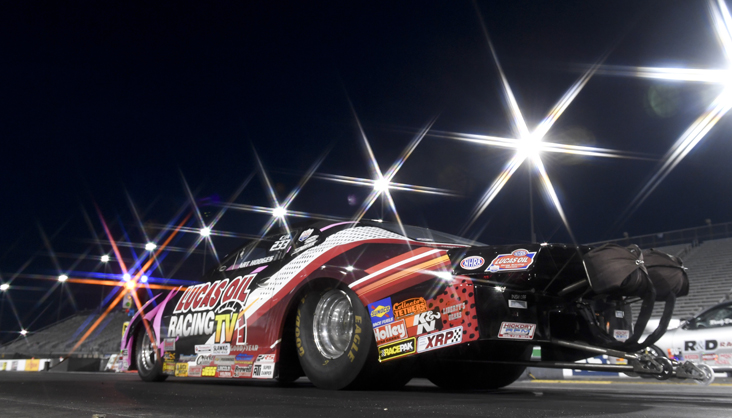 Appearing in his first national event final, custom home builder Hodges delivered his first win when he drove his C/Altered Camaro to a final-round win over Danny Holt’s C/EA in Comp. Down .09-second in Competition Index Control penalties, Hodges won the final with a (-.561) 7.249 to Holt’s (-.419) 8.171. Holt had .11-hundredths taken off his index during his early-round wins over Frank Aragona Jr., Van Puckett, and Larry Pritchett. [video] 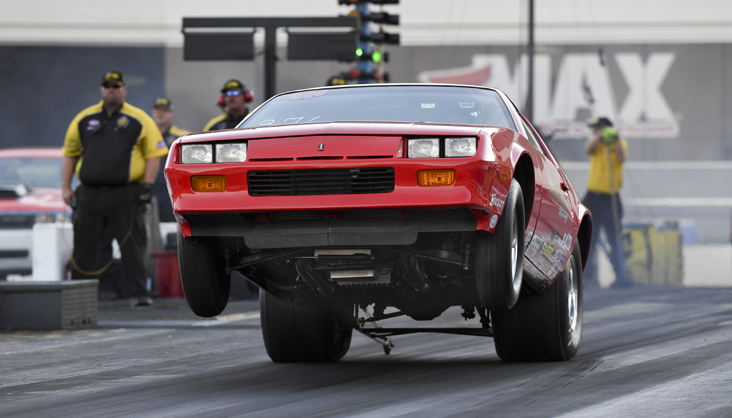 Null bagged his fifth career win in Super Stock and his first since the 2009 Gatornationals when he claimed a narrow win over Joe Lisa in the final round. Null left first by .014-second and held on for the win with a 9.799 on his 9.75 dial. Lisa was .02-second behind at the finish line with a 10.292 on his 10.24 dial. Null defeated Kevin Riner to earn a bye run in the quarterfinals and then topped Corey Taylor in the semifinals. [video] 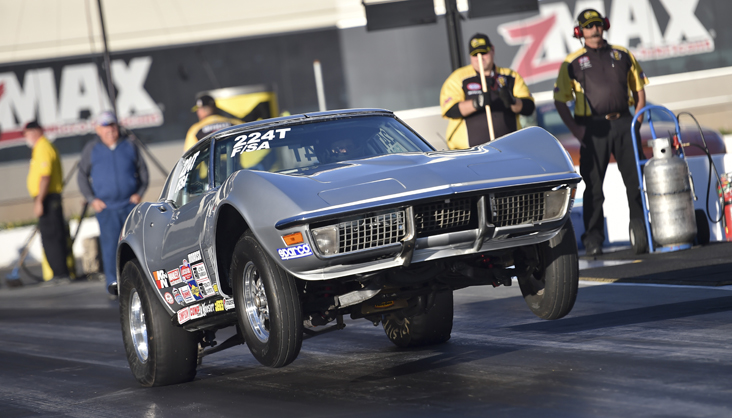 Taylor was perfect off the starting line with a .000 light in the Stock final but didn’t need it after opponent Anthony Fetch spun the tires and slowed. Taylor, a runner-up at the 1994 Englishtown race, was also perfect in the semifiinals after opponent Marvin Dunahoo was a no-show. Fetch, a five-time national event champ, including the 2013 Charlotte race, ran right on his 9.92 dial in the semifinals to beat Katie Sepanek, who also matched her 11.44 dial. [video] 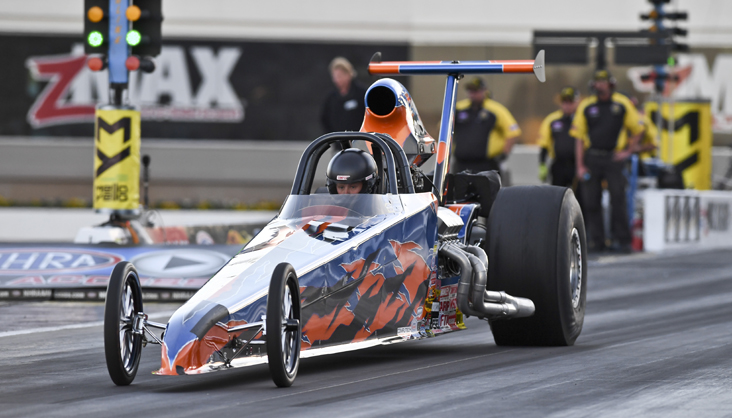 Manuel made it to his first national event final in Super Comp and made the most of it when he stopped six-time Northeast Division champ and current championship contender Tom Stalba. Manuel left first .010 to .045 and held on for the win with an 8.930 to Stalba’s 8.894 breakout. Manuel’s path to the final includes a win over current championship leader Chris Garretson, Zack Fisher, and a semifinal victory against Lee Ream. [video] 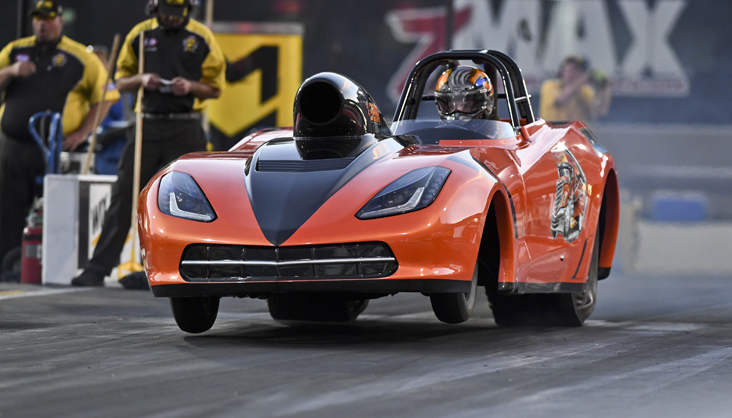 Just a thousandth of a second separated Fisher from Phil Smida off the starting line in the hotly contested Super Gas final, and Fisher, the 2017 Atlanta Top Dragster winner, collected his second title, 9.912 to a breakout 9.885. Fisher’s best run came in the quarterfinals, where he paired a .009 light with a 9.905 to beat eventual Super Comp winner Manuel. [video] 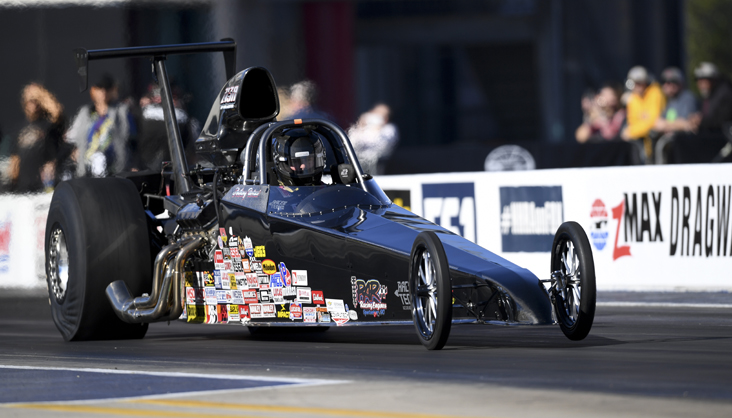 Bertozzi claimed the 21st national event title of his career when he beat J.B. Strassweg in the final of Top Dragster presented by Racing RVs. The low qualifier, Bertozzi won with a 6.030 on his 6.01 dial, and Strassweg was close behind with a 6.093 on his 6.07 dial. Bertozzi got a free run in the semifinals after Angie Travis broke and Strassweg scored a win against two-time world champ Jeff Strickland, who fouled out by a thousandth of a second. [video] 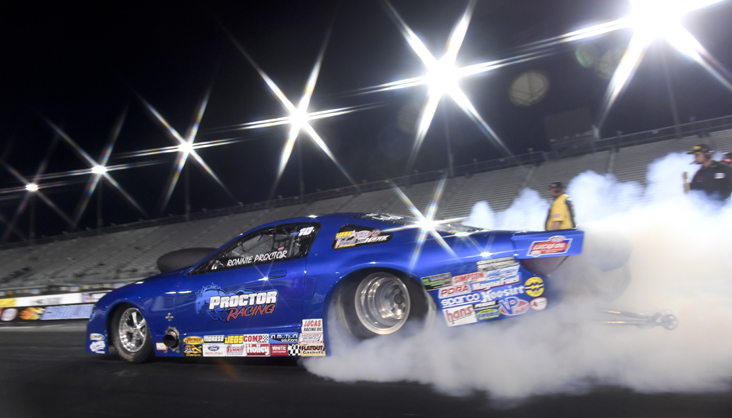 After winning his second national event of the season in Top Sportsman presented by Racing RVs, Proctor is the new leader in the battle for the world championship. Proctor drove his six-second Mustang to a final-round win over the Chevy Nova of Jackie Robison, who slowed in the final. Proctor was sharp in the early rounds with reaction times of .005, .009., and .012 to set up his run to the final. [video]