Two-time Mello Yello Pro Stock Motorcycle world champion Matt Smith added another title to his impressive resumé after he claimed the $25,000 top prize in the prestigious Mickey Thompson Pro Bike Battle at Sonoma Raceway. Smith, aboard his Victory Gunner-bodied V-twin, used a starting line holeshot to beat Eddie Krawiec, 6.793 to 6.764. The win was Smiths’ first in the specialty event, which has been held in Sonoma since 2014.

“To pull this off against a major factory team is amazing,” said Smith. “I’m happy for my team and for all the people who support us. I’m out here racing without a sponsor, so this means everything to me. We’re going to put this $25,000 to good use. It will help us a lot.  We have a great bike. We have a bike that can win this championship and hopefully I get the funding I need to finish it off.  In the final I knew I needed .02 to .03 [holeshot]. I figured we could run about 6.77 or 6.78. At the eighth-mile I was totally out of the groove. I could feel it spinning the tire, but I stayed tucked in and watched for my win light. I made a mistake in the final last year [against LE Tonglet] and I was not gonna let it happen again."

Smith had previously announced a switch to a Suzuki for the 2018 season but his partnership dissolved after one race, forcing him to race last year’s Victory V-twin. After missing the field at the first event in Gainesville, he has made up for lost time including his 19th career win in Chicago last month. Smith, who also works as his own crew chief and engine builder, was also the low qualifier in Norwalk last month. 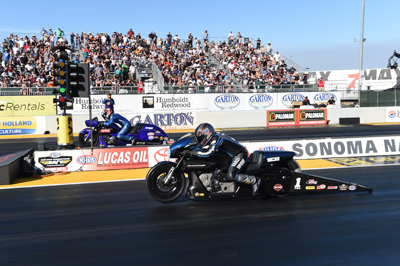 "Angie has got a good deal from Denso and by now everyone knows what happened to me," said Smith. " I’m on my own so is this is big for me. If you look at last three years I brought Victory into the sport and we had a good budget, but we didn’t have aerodynamics or the body to compete. I was always behind the eight ball when we had money behind us. I just wish I could get the money to let us run the way we can. We have good pieces right now. I’ve got a new [EBR] body coming for Brainerd so there will is a lot of good thing happening.”

The first round was filled with upsets with three of the four lower seeded riders advancing to the semifinals. The madness began when Jerry Savoie fouled against Scotty Pollacheck in an all-Suzuki battle. LE Tonglet scored a decisive win over Hector Arana Jr., 6.841 to 6.889. Arana Jr., fresh off his win in Denver, lost even though he recorded another 200-mph top speed. Smith then ambushed Krawiec’s temaamte, Andrew Hines, the winner of the 2014 and 2016 Pro Bike Battle events. Hines ran a 6.898 and was no match for Smith’s improved 6.783, the best run of the round. Low qualifier Krawiec nearly became the foruth upset victim after he got left on by Angie Smith. Smith, on her Denso Buell, was .04-second ahead at the 1,000-foot mark but she broke and engine and slowed to a 6.919 at just 180-mph allowing the Harley rider to advance. Krawiec has been to the final round in the last four Mickey Thompson Pro Bike Battle events and has a win in 2015.

Smith narrowly defeated Tonglet’s Nitro Fish Suzuki in the semifinals. Again, Smith was away from the starting line first and held on for a win, 6.803 to 6.806 in a battle that was decided by just .005-second at the finish line. Smith surrendered lane choice for the final after Krawiec made the best run of the entire event with a 6.757, 199.94 in his win over Scotty Pollacheck on his Suzuki Extended Protection Suzuki.

The Mickey Thompson Pro Bike Battle is a special invitation-only event the brings together the top eight riders in the Pro Stock Motorcycle class based on the previous year’s qualifying results. The eight riders in the field have a combined 13 championships and 152 NHRA national event victories.