“I’m hard on myself, but we’re getting closer. Like you said, it’s good that I have people around me to push me in the right direction.”

Like father, like daughter. Jianna Salinas is a senior at San Jose State University, the state school in the 10th-largest city in the United States. Unlike the rest of her fellow Spartans, Salinas hopes to become the latest to become a licensed Pro Stock Motorcycle rider by the end of the 2018 Mello Yello NHRA Drag Racing season.

Salinas made eight passes at Gateway Motorsports Park on the Stoffer-Underdahl test bike [video above courtesy of the Salinas family], which resembles a standard Suzuki Pro Stock Motorcycle but features a more forgiving transmission. Those eight passes brought the rider above the 40-pass threshold, a high number for someone still in the get-to-know-you phase with the two-wheel class.

That’s because Salinas wants to take it slow. The cautious approach isn’t a sign of trepidation so much as prudence. While the 21-year-old rides a Harley-Davidson street bike, anyone who rides one of these things for a living (not the author, sorry) will tell you the difference between the two is staggering.

“The way you position yourself is totally different,” said Salinas. “That’s a big thing we’re working on now, especially since I’m leaving the line a lot harder. It’s about my posture and how I grip the bars and the way I leave. That’s tough. Or, like I said: I’m tough on myself. I just want to get it right.” 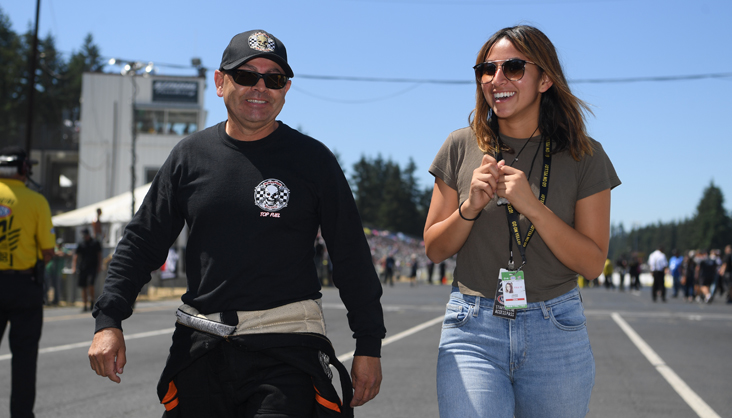 That’s where the opener comes into play. Anyone who knows Mike Salinas, the head of the Scrappers Racing organization and father to Jianna Salinas, knows him as a perfectionist to a fault. He’s self aware enough to admit it himself — that has its good days and bad days. But the competitive drive can be infectious.

Jianna will test against in Dallas and Charlotte with an eye on licensing following the NHRA Toyota Nationals in Las Vegas. If she’s not ready, she’ll wait. There’s no reason to rush. Her sister, Jasmine, is on a similar path, but in a different class: Top Fuel. The level to which the Salinas family jumped into the NHRA Drag Racing pool is impressive, but makes sense the more you get to know the members of the family.

“We try to make the best use of our time as possible,” said Jianna of the eight passes made at Gateway. “I was pretty tired (the day following testing)” but it was worth it. We just want to take advantage of the time we have.”

Salinas ran a personal best on a terrific track, traversing the quarter mile in 8.086 seconds on a bike set up to go no quicker than around 7.9 seconds. She said she hit the stripe at around 170 miles per hour. That’s not too far off from where the rider will need to be in order to complete the licensing process.

The Stoffer-Underdahl team, including Karen and Gary Stoffer, as well as Jim Underdahl, have been indispensable throughout the process. While Jasmine can usually be found working on the Scrappers Racing Top Fuel Dragster at national events, Jianna is most commonly found in the Stoffer-Underdahl pit area, soaking up knowledge from some of the most experienced riders in the sport.

That will prove invaluable — not just for earning a license, but when Salinas makes her NHRA debut. It’s just a matter of time before father and daughter … and daughter … are all racing together.